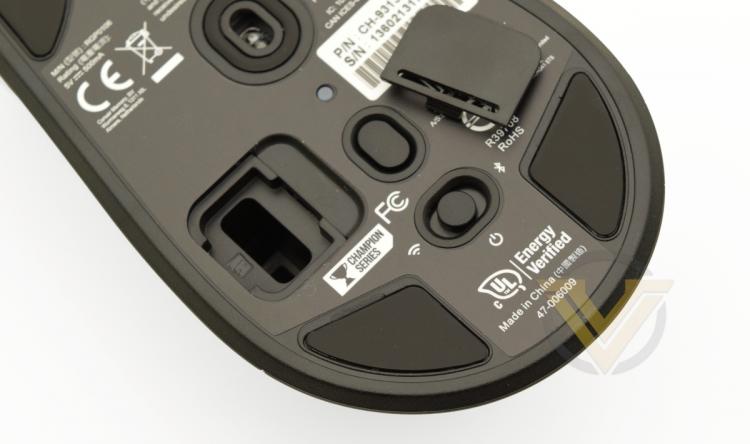 Two aspects of the SABRE RGB PRO WIRELESSs design stand out among a laundry-list of features that arent uncommon on a mouse of this class.

This 26,000 DPI sensor debuts with the SABRE RGB PRO WIRELESS, and we suspect that it will not be the last we see of their new design. Its developed in partnership with PixArt, manufacturer of other high quality optical sensors for gaming mice and with whom theyve negotiated similar semi-custom sensor models in the past.

From a raw DPI standpoint the MARKSMAN surpasses even Logitechs HERO sensor (which is capable of 25,600 DPI in its most recent iteration), and we imagine thats no coincidence. But whats more impressive are those headline figures for maximum acceleration and speed: 50G and 650 IPS put it comfortably to the head of its class.

The MARKSMAN sensor is the strongest justification for the mouses inclusion in CORSAIRs CHAMPION SERIES.

CORSAIR SLIPSTREAM is the SABREs primary wireless mode, a proprietary 2.4GHz technology that maintains low latency between transmitter and receiver. Such is the strength of the technology that in this iteration the hardware supports a higher than normal polling rate - 2000Hz - as a further support for low latency operation.

A subset of SLIPSTREAM wireless receivers and devices also support multipoint pairing, allowing more than one device to be paired with a receiver. In theory, this can cut down on the number of required USB ports significantly, but as well see the pairing process can make this a little more tricky than one expects.

Bluetooth meanwhile is more oriented towards workplace productivity rather than gaming, broadening support outside of desktops and laptops with a surplus of USB ports. Bluetooth LE is a Low Energy variant of the protocol, reducing power consumption with supported receivers at a cost to performance attributes.

When not in use the compact SLIPSTREAM USB receiver can be tucked away inside a compartment accessible on the floor of the mouse.

The SABRE PRO RGB WIRELESS is also bundled with a 1.8m long USB-A to USB-C charging cable that also facilitates a wired mode (with full functionality otherwise). CORSAIR appear to be transitioning to USB-C ports across their peripherals where it can be supported on the device itself, potentially as a means of future-proofing the range for a time when the USB-C standard (and USB-C to USB-C cables) has become ubiquitous across PCs, Macs and other platforms.

CHAMPION features continue with OMRON microswitches, a proven brand for long-term reliability, consistency and durability. The wireless SABRE RGB PRO also on-board memory for three profiles that dont require iCUE software to operate, making it an excellent candidate for console gaming across multiple games with diverse genres. Underscoring that, on-the-fly DPI adjustment allows you to tune mouse sensitivity through the hardware itself.

CORSAIR sent us a Reviewers Guide alongside the mouse to better spell out its specifications and explain some of the features where the functionality might not be obvious. This isnt uncommon, but we should make note of the fact that there were two significant discrepancies between the listed specs and the specs exposed in the iCUE software (v4.15.153).

The mouse was described as having 7 programmable buttons, but iCUE only identifies 6: Left and Right Click, Middle Click, DPI Toggle, Forward, and Back. Furthermore, the Left Mouse Button is only programmable once another button has been set to the LMB default. Its possible that the Profile Switching button at the base of the mouse is intended as the seventh but there are no options to rebind or otherwise modify it through iCUE at present.

Secondly, two Lighting Zones are advertised through the Guide but only one - the RGB Logo - is visible in normal use. Technically the indicator LEDs located on the DPI Toggle button or above the Profile Switch button on the bast might be lighting zones, but theyre configurable only as an indicator of the current active DPI Stage/Profile (and then only for ~5 seconds). Given the tools available and CORSAIRs prior classifications of Lighting Zones as highly configurable and semi-independent mouse attributes, customers would have every right to feel disappointed over the disingenuous listing if replicated on the official website at launch.

Errors do crop up from time to time in reviewers guides so we're fairly relaxed at this point, but the final published tech. specs needs to reflect the actual capabilities of the device in question.