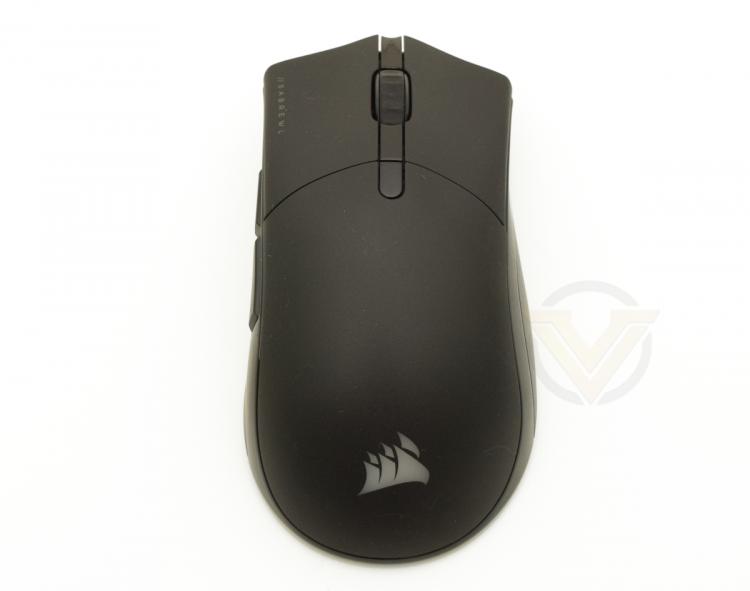 The SABRE RGB PRO WIRELESS has a shape thats essentially identical to that of the non-wireless variant: asymmetric and flaring at both ends with amble palm support. It is large in comparison to the majority of modern mice but not uncomfortably so, and may be preferred by gamers with larger hands or a grip thats suited to this size.

From the top down theres the LMB and RMB, mouse wheel, DPI cycling switch (the shiny section below the wheel and both main buttons) and the illuminated CORSAIR RGB logo at the bottom of the shell. Another LED is present on the DPI Cycling Button but, as an indicator LED that's illuminated for brief periods of time, its usage is functional rather than aesthetic in nature.

//SABREWL is printed on the left edge of the LMB, which is a bit of trim thats a distinctive flourish CORSAIR have been adding to their most recent peripheral releases. 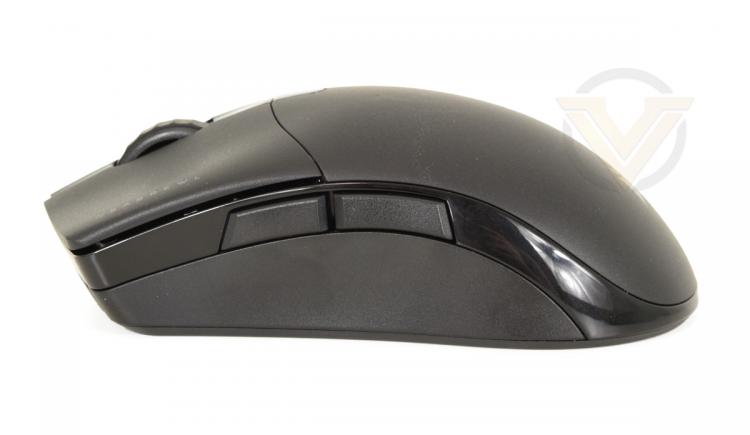 The side is once again shaped like non-wireless SABRE PRO, with two very slightly separated thumb buttons and some glossy plastic trim running around the perimeter. The sidewall section below the thumb buttons is just slightly concave, contoured to a thumb and making it easier to grip the mouse and lift it off the mousing surface.

One change from the original model however is the lack of DPI stage indicator LEDs at the leading edge. That functionality has been moved to the top of the mouse, likely saving a couple of crucial grams, and its fair to say that the older implementation wasnt perfect as an at a glance indicator - it had a great location, but telling the DPI stage from the number and location of 1-2 illuminated LED bars (rather than just colour) in a fraction of a second didnt really work well.

The opposite side has no buttons and the same glossy plastic trim running around the edge. The side wall is angled outward rather than inward, supporting fingers and palm but also making lifting the mouse slightly more difficult than it would otherwise be. Youll be relying on the inherent grippiness of the plastic surface to lift the mouse, and either way will be lifting unevenly rather than optimally horizontal. 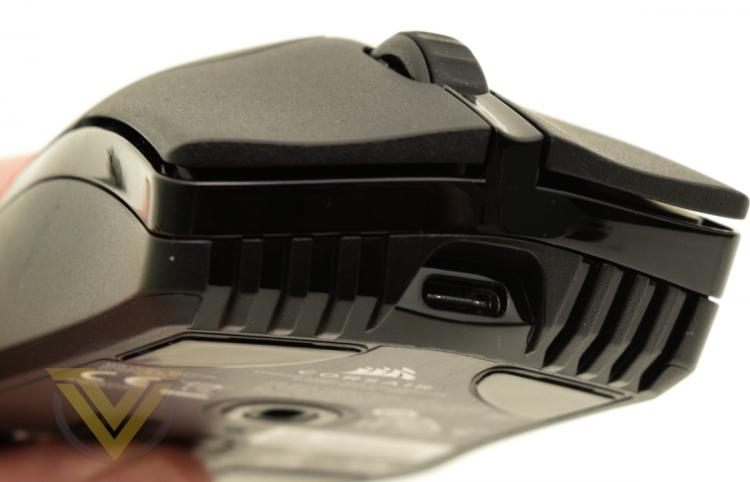 A USB Type-C connector port is positioned front and centre recessed within a slightly narrowed entryway; most but not necessarily all USB-C cables should fit the port (and certainly the cable shipped with the mouse). Its ideally located for using the mouse when its charging, maintaining overall balance for continued use when gaming, browsing etc. 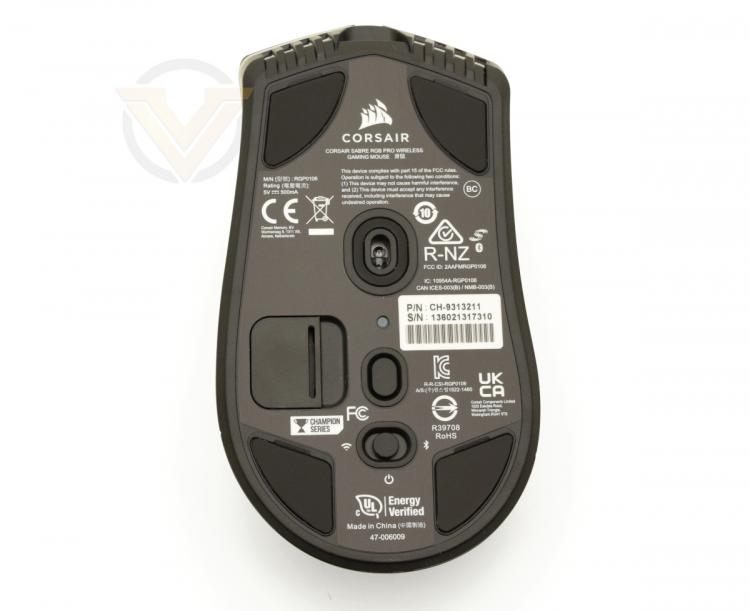 The base is a little more busy than the wired SABRE RGB PRO. Four friction-free skates will keep the mouse sliding freely on most mousing surfaces despite the mouse bases large surface area, while a further section surrounds the optical sensor and protects the opening from lint and catching on fabric surfaces.

To the left and below the sensor is a compartment for storing the USB mini-reciever. Its very slightly recessed into the base and so shouldn't catch on uneven surfaces, but expect to have it cause a little more wear on fabric mouse mats. Be gentle with the clip holding it in place however as its not the most rugged of designs.

Next to it is the dedicated Profile Switching button with an indicator LED just above it. This LED can be set to different colours on a per-profile basis for both onboard and software profiles, and briefly flashes when the active profile is changed.

Below this button is a 3-way switch setting the wireless mode (with a central Off position). When set to off the mouse will still operate when connected via the included cable.