👤by Tim Harmer  Comments 📅16-09-21
Conclusion
Despite some minor misgivings outlined in the review last April, our overall experience with the wired version of the SABRE RGB PRO was a generally positive one and we were looking forward to getting to grips with this new model to see if it could hold up, taking advantage of its hefty build that could surely easily accommodate the additional complexity necessitated by wireless communications. Unfortunately we continue to have a mixed opinion of CORSAIRs wireless lineup.

The SABRE RGB PRO WIRELESS is still a chunky rodent, ideal for those with larger hands who want to enjoy lightweight mousing but dislike the diminutive stature of most modern FPS-focussed gaming mice. Claw grip or palm, it will support you adequately whatever the size of your hand; a traditional fingertip grip however should only be attempted if you have digits on the longer side. And it doesnt give too much away on the scales either; at just 79g its considerably lighter than Razers Deathadder Wireless, Logitechs G703 and the Steelseries Rival 3, each of which could be considered a competitor.

Overall build quality is good, without being stellar. The mouse wheel is by far the weakest component, even feeling like a step down from that on the wired model due to its poorer consistency and more mushy feel. The QUICKSTRIKE LMB and RMB by contrast were if anything better than their non-wireless counterparts; both responded crisply and with only the tiniest amount of lateral wobble on either. 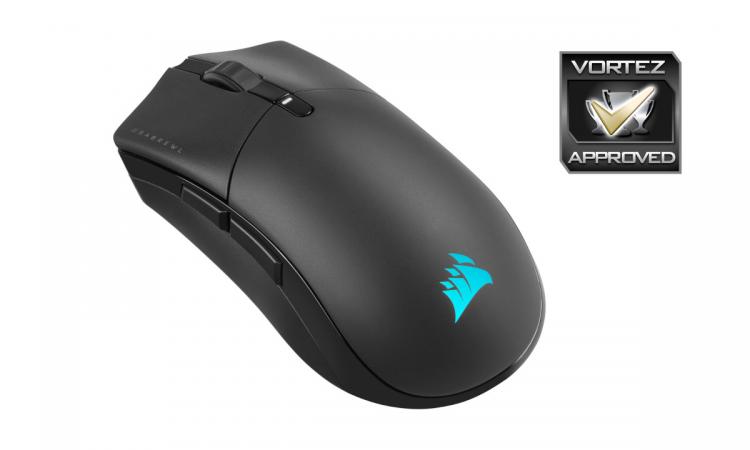 The MARKSMAN sensor was also significantly better than the prior best straight out of the box. Zero tracking issues on the MM350 PRO mousemat and zero obvious negative acceleration built into the sensor dynamics from day one means it gets both thumbs up from us.

Wireless functionality is good and yet the setup procedure for Multipoint pairing to a single SLIPSTREAM receiver could do with some work. The number of USB ports required to pair more than two devices might be fine for desktop, but there are plenty of ultrathin laptops that would struggle to have even three USB ports available on the chassis. Bluetooth 4.2 + LE connectivity is a welcome addition indeed, bolstering a good battery life out to a maximum well over 75 hours; just be aware that its best for productivity, gaming will suffer from even the small amount of latency this mode introduces.

Nonetheless, blunting the effectiveness of this SABRE is the iCUE software. Weve long held CORSAIRs iCUE to be one of the better peripheral software suites but the most recent iteration has started to undermine the user-friendliness of their hardware. Core functionality is present but often strangely placed within the UI; clear logical steps that could expand on mouse functionality havent been taken; no polling rate information is shown in Multipoint mode; compatibility prompts should be shown prior to making a particular set of configuration changes rather than after. We called it unpolished but fixable, and stand by that description.

So can we recommend the SABRE RGB PRO WIRELESS? On balance, yes, but with sterner caveats than its wired sibling in addition to its unusually large size. Greater functionality means interfacing more with the software, and that means more time spent with whats by far its weakest aspect. On the other hand console gamers will once again enjoy software-free on-the-fly DPI adjustments, and everyone will appreciate the mouses low weight.

CORSAIRs SABRE RGB PRO WIRELESS is a fine addition to their 2021 portfolio thats let down by its undercooked iCUE software module. An oversized but lightweight frame is great for competitive gamers with larger hands, the new sensor has eliminated some teething issues with the prior generation, and dual wireless modes offer flexibility in a crowded market where it's not guaranteed. Slotting in amongst fierce competition, youll want to try this new SABRE before acquiring it for your personal armoury.