👤by Tim Harmer  Comments 📅13-03-13
Conclusion
It's been over a year since we reviewed the M60, and in the intervening period a significant number of high quality mice have passed through our hands to be tested. Does this new update, the Vengeance M65, keep up with the renewed competition? The answer is more complex than we first thought.

Without doubt, the hardware is still of an excellent standard. The aluminium chassis and plastic shell have the heft of a mouse you think will last for years rather than the more fragile impression you may get from other entirely plastic chassis. Yet again the choice of high quality switching components show their value with a sensitive response on the main buttons and consistent play on the side buttons. Of course, there is a trade-off: the M65 is pretty heavy, but the five Teflon skates do an excellent job of keeping friction low and making the mouse feel far lighter than it is.

FPS gamers will find the addition of a sniper buttons welcome, whilst MMO gamers will appreciate an additional button to bind to a macro. Three DPI settings up to 8200DPI is the gravy on top of the package.

No, it's not the hardware where the M65 feels lacking, but rather the software. It hasn't changed a great deal since the M60 was reviewed last year, and proves itself to be less intuitive and flexible than many suites developed by competitors in the past year. With a few exceptions this merely leads to a steeper learning curve, but the inability to cycle profiles outside of software UI or store more than one onboard is a let-down and distinct weakness.

Even so, if you're comparing it to some of the high-end solutions we've reviewed recently, Corsair have got the price right. At less than £50, not only are all three colour variants of the Vengeance M65 less costly than many of the competitors, they're also priced lower than the model it's replacing. Couple that with the generally very good RMA process Corsair boasts and it's a proposition that should be tempting to those wanting to spend a little more than usual on a new peripheral without breaking the bank. 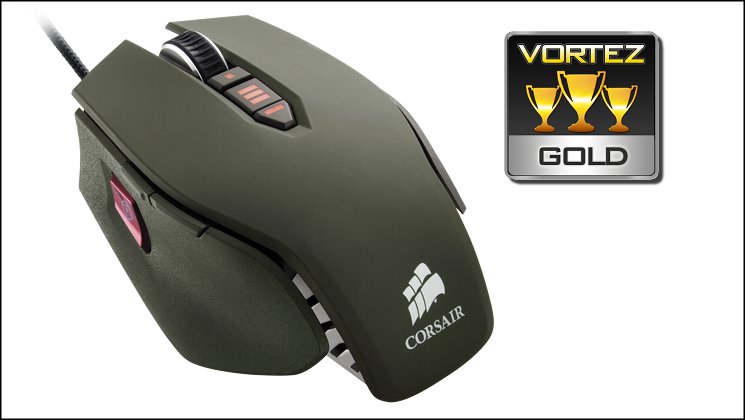 In the Vengeance M65 Corsair have produced a mouse which is a strong successor to the M60. Those who have already invested in an M60 won't seem much of a benefit in the M65 - although there is some - but those who previously dabbled in the low-to-mid range should find the M65 a worthy purchase. Corsair should however spend more time on the software, where they are beginning to be surpassed by more comprehensive competitor solutions. Thanks to the excellent build quality, aesthetics and value it earns a Gold Award, with a strong emphasis on suitability for FPS gaming.