👤by Tony Le Bourne  Comments 📅03-06-13
Performance Testing
Right Mark Audio Analyzer
RMAA suite is designed for testing quality of analog and digital paths of any audio devices, be it a sound card, an MP3 player, a consumer CD/DVD player or an acoustic set. The results are obtained by playing and recording test signals passed through the tested audio path by means of frequency analysis algorithms. A more common mark is also provided for those unfamiliar with measured technical parameters.

Understanding the limitations of a test is something that should be addressed in regards to giving an accurate portrayal. RMAA is a useful tool but testing has many variables thus results are only comparable under similar set standards and parameters and shouldn't be compared directly to other results that may have been obtained under different testing conditions.

In this test, we noticed various inconsistencies while trying to use the 'backlooping' method by using a jack to jack cable from the primary output port to the microphone port. These inconsistencies can be caused by any number of reasons E.G. having to use an RCA splitter to jack, having two separate audio channel paths, input recording quality, hardware variations, margin of error, quality of cable, software settings, drivers, hardware load and faulty hardware to name a few. So the testing was done by using the stereo mix function on both the integrated motherboard solution and on the Creative ZxR sound card as to obtain comparable results. 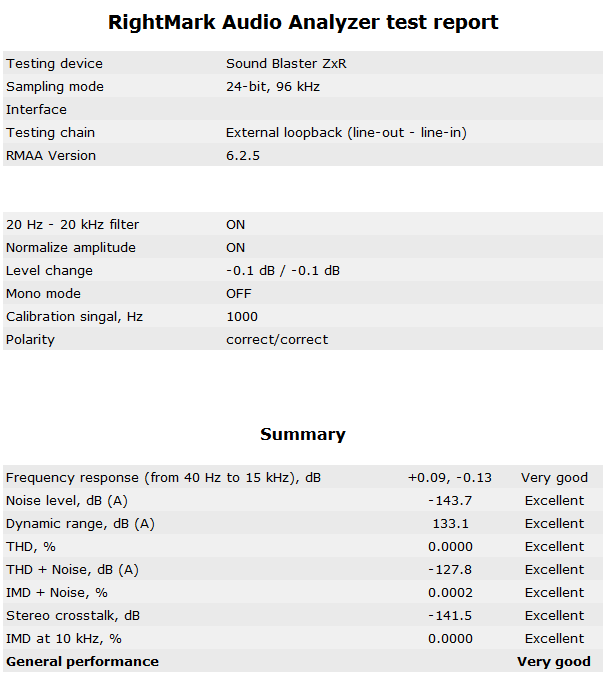 Setting up and observations
Setting up a 5.1 speaker system was easy due to the inclusion of various cables and adaptors along with the ACM which allowed easy access to the headphone and microphone ports not to mention the ability to use 3.5mm jacks out the box as many may not own headphones that have native quarter inch jacks and may not have an adaptor to hand either. Switching between headphone and speakers resulted in a slight crackle which lasted for a brief few seconds. This is likely due to the use of the micro relay switches that may 'dirty' the audio signal when swapping between speakers and headphones. This is a slightly confusing situation as this result should have been predictable. Though it is only a minor issue, it leads me to question, 'Why couldn't Creative have made the headphone jack 'always on'? It is hardly correct to call it a 'dedicated headphone jack, when it sacrifices the use of the front speakers to be able to use it. Surely it may have been more efficient to have both always on and simply swap audio source as using the 'switch', while simple, seems more of a gimmick and takes the same amount of time to change over as it would changing audio source though windows. So maybe this switch idea that is being sold as a feature is actually more down to a limitation of the Sound Core3D and has to share the primary stereo audio channel. That aside, using the ACM was a nice treat and the smooth volume dial was nice to play with. It is worth noting that you can only use one headset with the ACM, though there are two pairs of jacks the quarter inch take precedent.

Multimedia
Listening to music, I disabled the SBX effects and filters, this is more a personal preference. The bass in Sabrepulse's First Crush in FLAC format was notably improved over what I had previously experienced before, picking out variations and wobbles comparable to a blueberry cheesecake which did not muddy the middle or treble. The treble was fast and sharp but not unbearably so making it crisp and refined. Listening through Jake Shimabukuro's Beat of my Heart, an instrumental track played on a ukulele, tonal differences were noted with each strum and pluck as the strings are bent, faint sounds of fingers sliding on strings, light taps on the side of the instrument as well as some accidental strums were all picked up.

A high end sound card such as this really does well to bring gaming to life. In Battlefield 3, almost every aspect of sound has improved over the onboard solution, from reloading and shooting to ambient sounds, are all more defined and creates a great sense of alertness and realism. The SBX surround feature works well to give a sense of direction via stereo headset too.

Watching through the film Pandorum was a real treat as the sound effects really took you into the movie. The breathing, slight noises and footsteps in the quiet, the high pitch whine when Bower falls and hits his head is almost lost using the onboard solution. Pumping bass helps build suspense and the SBX effects too again help draw you into the movie more with the slightly exaggerated sounds giving a more dramatic effect and the surround option through stereo headset feels like you have been dropped into the middle of the film.