👤by Tony Le Bourne  Comments 📅03-06-13
Conclusion
The Creative ZxR delivers awesome fidelity as one would expect from a flagship sound card, though quality of audio on this level becomes dependent on the peripherals you want to use this to drive. To the point, you want to be using high quality audio peripherals to get the most out of this sound card because using a £30 set of speakers on a £200 sound card will not provide you with that breath taking experience in your multimedia playback. Again this product may deliver more features than someone needs, considering the cost, you could get a Creative Sound Blaster Z and a fairly good set of headphones such as the Beyerdynamics DT770 for the same price and you will likely net better audio quality than you would by buying the ZxR and sticking to your old £50 headset or speakers.

So who is the ZxR aimed at? It would appear, everyone who cares about audio. The reason for this is, it is the first soundcard to deliver 'audiophile' grade components and features, yet being able to cater for the needs of gamers, entertainment and home theater enthusiasts, budding musicians seeking high quality recording features at home and of course people who want to plug in their high end headphones into an amplified quarter inch jack and get high fidelity music playback. It doesn't stop there though, there are removable opamps to give audio enthusiasts the choice to swap them out for something more to their liking, the 124dB SNR is an immense achievement and the ZxR hammers home with some exclusive features using the Sound Core3D. Did I forget to mention that the soundcard itself and the DBPro daughter board actually look good and sound even better. Furthermore, it is bundled with a competent, good quality ACM with an integrated microphone as well as various cables which should allow most people to get specific use out of their new sound card out-the-box without having to track down any specialist cables. 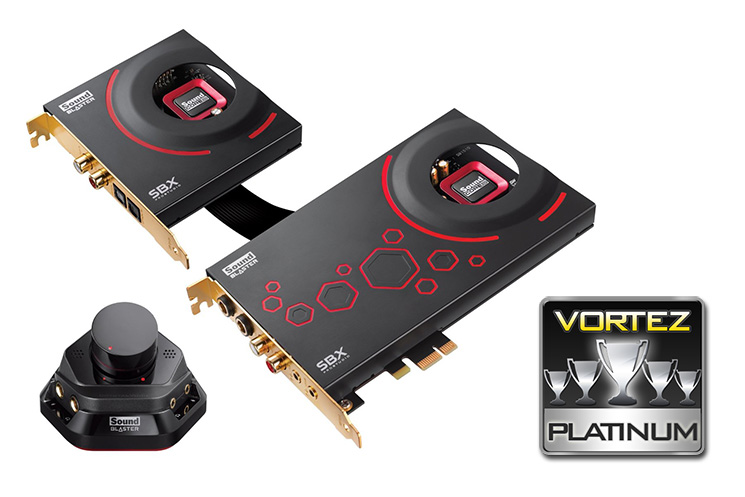 So is all this worth the MSRP of £199.99? Well after making a count, there is at least over £100 in street value on just capacitors, opamps and the headphone amp, adding up the DACs and ADC as well as two of Creatives Sound Core3D then factor in the design and creation cost then the cost of the ACM and bundled cables, it does actually seem like you are getting your moneys worth, so can it compete with alternatives? For the price, the ASUS XONAR Essence STX is considered to be an 'audiophile' favourite, but at £120 you will be stuck with stereo channels. It is true that for gaming and entertainment, the Creative Sound Blaster Z will act as a very good all rounder giving great sound reproduction, a headphone amp and the choice for 5.1 surround sound speakers. What if someone wanted both audio enthusiast grade hardware and versatility? The ASUS ROG XONAR PHOEBUS? Well it does offer excellent sound and can support up to 7.1 surround analogue, but doesn't offer the expanded I/O for recording or home entertainment, nor removable opamps and a quarter inch jack, and to be really critical, the ACM supplied with the ZxR is better quality than the headphone breakout supplied with the PHOEBUS. So the choice comes down to your demands, need a high grade audio hub that can do it all? You could choose to buy an ASUS XONAR Essence STX and a Creative Soundblaster Z to go in your system, or for a little less you could just get the Creative Sound Blaster ZxR.

Pushed to be highly critical, the drawbacks of the ZxR are very minor. I would have liked to have seen a more 'wow' factor in the design, for example, the PHOEBUS has rear green and red LEDs on the headphone and microphone jacks as well as side LEDs stamping its name into your PC setup. Even the Creative Sound Blaster Z had some attractive red LEDs which the ZxR is missing. Also, the DBPro cable could have been more considerately designed, PCI spacing is a standard so the spacing between the main body and daughter board is fairly predictable and Creative could have designed the cable to be of a precise length. Lastly, the driver software could have been refreshed a little to have that more exclusive top end 'flagship feel'.

The Creative Sound Blaster ZxR leads the way in PC audio, offering high grade components and features for audio enthusiasts, versatility that will suit gamers and home entertainment buffs, as well as catering for those looking to make high quality recordings at home. Complimented with an attractive bundle and easy to use drivers with exclusive features, though not perfect, it is close. For this reason we happily present the Creative Sound Blaster ZxR our Platinum award.

Click here for an explanation of our awards at Vortez.net. Thanks to Creative for providing todays review sample.