👤by Weston Dakin  Comments 📅08-09-18
Performance Testing (Multimedia)
To test the Sound BlasterX G6 we pitted against the onboard audio solution of the MSI X370 Gaming Pro Carbon. That features Audio Boost 4 with Nahimic 2 which is set out on an isolated section of the motherboard which ensures all the audio signals stay pure, and it works in a similar fashion to a dedicated soundcard. It features a built-in 120dB SNR / 32-bit DAC and supports DSD super audio, plus it can power headphones up to 600 ohm as well as using chemi-con audio capacitors. So the solution is pretty good, but will the Creative G6 be better? 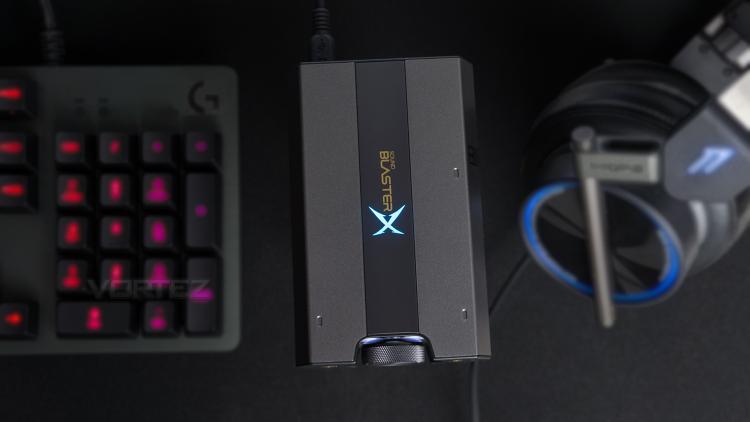 The Creative G6 is packaging a 32-bit 384.0kHz DAC with a 130dB DNR. It supports Dolby Digital Decoding, a discrete headphone amp, enough power to run 600 ohm headphones as well as an ultra-low THD (Total Harmonic Distortion) and SB-Axx1 audio tech. Specs wise it is close with the G6 slightly beating the MSI in every regard, but numbers only tell part of the story and in reality, its all about which sounds and performs better. For the comparison, we used the same headset, identical tracks, same audio player, the same volume output and an identical flat eq profile, that way we could keep the test as fair as possible. The parameters are.
50% volume
Standard Windows Audio player
Same tracks across a mix of genres
Flat eq profile set for both the motherboard and G6
1MORE Spearhead VRX headset
3.5mm connection used
SBX mode switched off on the Creative

Well start with how the MSI sounds and then add if the G6 has improved the sound or not. The first thing we noted is that when plugged directly into the motherboard the audio output was quiet, even at the baseline 50% output. Swapping over to the G6 and youll notice an immediate increase in output with the audio being considerably louder at the same 50% setting. As a more direct comparison, it wasnt until 75% on the MSI that the volume output matches what the Creative offers at 50%. The bass production from the MSI is pretty good; we noted that it is tight, controlled and possesses a decent low end with solid levels of depth, punch and vigour. Changing to the G6 again lead to a change that was quite drastic, the bass became fuller, more potent and had a low-end extension that the MSI could not match.

Onto the treble and the MSI is again good, the treble is clean and clear with good amounts of detail and a broadness that is very commendable. Small detail delivery is impressive too. Switching to the G6 and again each good aspect of what the MSI offered is made better. The clarity is bolstered, the output signal is cleaner resulting in a crisper treble, its also more pronounced and helps create an overall sound that is even more balanced. Vocal production from the MSI is again good, the tonal delivery is natural, it has plenty of energy alongside impressive clarity and control. Plugging the headset into the G6 and the vocal has more noticeable presence and sinew, as well as more spark and life. The higher frequencies produced by the MSI are slightly subdued and dont shine that much, but with the Creative, they are elevated and can be identified easier. Overall the sound produced by the Creative is richer and just has an ability to draw more from your headphones and deliver it to you in a way that is more enjoyable and exciting. 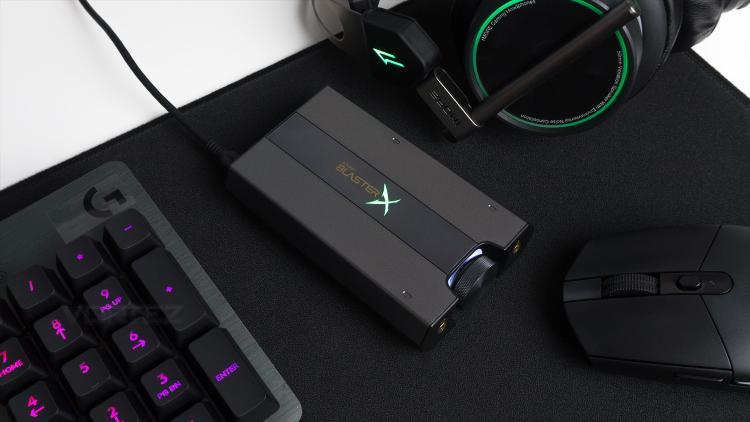 For gaming youll note a good improvement too especially with the clarity and detail you gain from the treble, this helps with competitive titles as it makes identifying sounds much easier. Things like gun loading, swapping or gun-fire is easier to pick up on and helps you pinpoint sound sources much easier as these sounds come through clearer. The increased sound scope helps too as it broadens what you can hear and helps with locating battles to join in or avoid. Another great feature is the pre-tuned profiles that come baked into the software; these profiles can be quickly changed depending on what title you are playing, the list of compatible games is as follows.

There are also other presets that include FPS, Strategy games, RPG and Stadium, these all alter the profile depending on what you are playing. For solo adventure titles the improved sound helps create a greater sense of atmosphere and helps with immersion, plus the more potent bass gives deeper sounds more purpose and brunt. We arent trying to detract from what the MSI solution offers as it is very good in its own right and though most would likely be perfectly happy with it, the Creative just improves upon every aspect of what it offers and heightens it.

Now well be looking at some of the other features the Creative offers; these include the effects under Creative SBX and Scout mode for gaming.

Creative SBX off - this mode turns all electronics effects off and provides you with the most natural representation of what the G6 sounds like. This can be seen in the paragraphs above.
Creative SBX on - activating SBX essentially gives you access to the full suite of audio features the Creative offers, and there is quite a lot. Firstly is the Acoustic Engine which provides you with a few features that can be tweaked, these include the Surround effect, Crystalizer, Bass, Smart volume and Dialog+. First, there is Surround which virtually creates speakers all around you, this turns the headset into a 7.1 setup. There are three levels of this; there is Normal which is no effect, Wide and Ultra Wide. The Wide setting does create a good sense of surround sound, but its not at a level that is overly artificial sounding. The sound still sounds quite natural and although not necessarily better it does change the characteristics slightly. Switching to Ultra Wide there is a slight perceivable drop in quality and the effect does become too unnatural sounding and not all that realistic, for software it isnt bad as such, but it still doesnt compare to a true surround setup.

Crystalizer - basically tries to fill out the sounds within music by lifting the detail found within the treble. This feature does work, and it does successfully draw out more from your music. It does this by increasing the intensity of the treble and highlighting some details that are often shadowed within music files, this effect works better for MP3 files than it does for FLAC as FLAC has more detail to offer from the get-go.
Bass - does what it's designed to; it beefs up the low end but to be honest, the effect isnt all that good and does somewhat cast a cloud over the low end which reduces the lucidity. It does fill out the bass, but it does lose some of its detail, it also impacts the treble and vocal in a negative manner by reducing its clarity and presence which is not a good thing.

Smart volume & Dialog+ - Smart volume didnt really appear to do much, we played back a few movies with big changes in volume and didnt notice a difference with the effect on or off. Dialog+ does do a better job where it manages to highlight vocals and bring them more to the forefront of the sound this is great if youve ever been listening to speech in movies or TV and found it too quiet.
Scout mode - is designed to help you hear beyond what you see, things footsteps, speech and weaponry handling are supposed to become clearer making it even easier to pinpoint these sounds. This feature really works as it does a superb job at highlighting exactly what its supposed to where gun-fire, footsteps and weapon switching all become magnified and highlighted more clearly. It does have an impact on bass however which does give more force to bass-heavy sounds, this is a touch of a downer as you really require as clear a treble as possible, of course, a quick eq tweak can sort this but it would be better if just the treble was lifted and not the bass. You can also assign a hotkey to turn this mode on and off if as and when you require it.