👤by Tim Harmer  Comments 📅26-08-20
Conclusion
Assessing Cyberpower PCs Infinity X10 RTX isnt a trivial matter; the performance levels and overall cost necessitate a considered and (if possible) holistic approach. Bear with us as we sum up our thoughts.

For many the visual style of the system will be of primary importance, and Cyberpower have done solid work in this instance. NZXTs H511 is one of the more attractive chassis on the market and the assembly team have kept things simple but effective. As a traditional gaming system it looks great, but this PC would be equally at home in an office or living room if you chose to remove the logo and switch off the lighting. Not many systems can boast such versatility without considerable thought being put into its configuration.

Setting up the system was a doddle, thanks both to Windows 10 coming pre-installed and the inclusion of a motherboard that supports built-in WiFi, so much so that even a novice should have no difficultly in getting started with minimal aid. With Microsoft transitioning to requiring internet access for smooth setup we shouldn't understate how useful that might be in the future.

The finish is exceptional. Cable management is the classic go-to and its genuinely that good, but ostensibly minor aspects such as including an RGB LED controller and taking the time to affix it in a discrete but accessible location that really show care and attention. It feels like a finished product, as much as a premium console and far more than any off-the-shelf OEM system.

Performance is... well... dominating, and we would expect nothing less given the choice of components. Intels i9-10900KF is likely the fastest CPU for gaming on the planet right now, and its only a small step up from the RTX 2080 SUPER to reach the RTX 2080 Ti. It coped well with all the titles tested 1440p, which we judge to still be the sweet spot resolution for gaming today, and the system would be a perfect match for a 144Hz monitor with NVIDIA G-SYNC. Even Horizon Zero Dawn, a new very title with some way to go before full optimisation on current-gen hardware, felt like a joy to play.

If there was a down-side to the system as configured, it was noise. NZXT's H511 is not the best when it comes to cooling chiefly due to a confined air intake, and the fans worked overtime to maintain sensible temperatures. There will always be a trade-off in noise versus cooling, and theres scope to loosen the aggressive fan curve, but out of the box its too loud to use comfortably without headphones. Alternatively its possible to opt for a different chassis, one not so attractive perhaps but better suited to the components installed.

Two more minor grips on the grand scale are memory capacity and the default chassis. For £2200 we'd really like to see 32GB of DDR4 RAM rather than 16, but on the other hand it would be sad to trade off against any of the selected components. Going for the H511, rather than H510 or some other case, leaves the system without a USB-C front panel connector despite the motherboard supporting one. That seems like an oversight, but once again does take the system down a few notches from perfection. 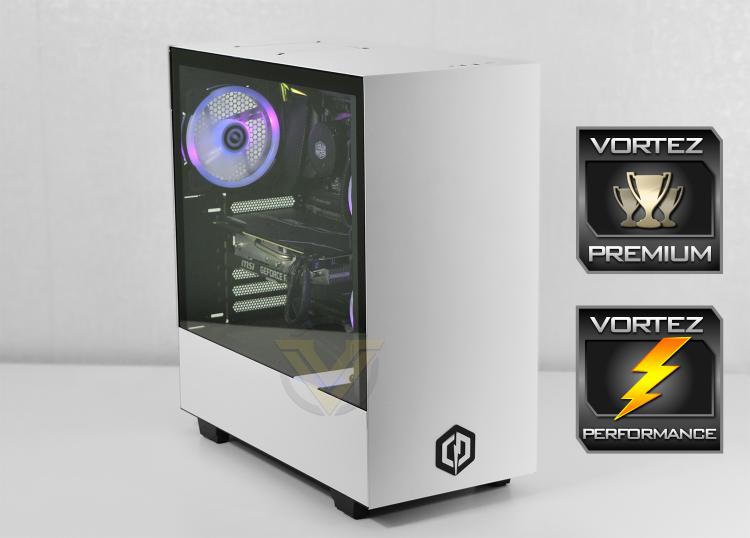 Finally, we come to value for money. In our view Cyberpower nailed it, restricting the system cost to within 7.5% of the street price of the most significant individual components and including more besides. Furthermore the sheer breadth of options available in the configurator for the Infinity X10 RTX range arent much of a restriction if youre in the market for a system at this level of performance.

We should state that there are two aspects we are unable to assess. Order fulfillment times and the quality of the warranty are both important and often cited as reasons both for and against purchasing from a system integrator, and a single bad experience can easily sour the entire concept. Cyberpower PCs terms for both delivery and long-term warranty are within industry norms, but we strongly urge potential customers to weigh consumer reports in their deliberations.