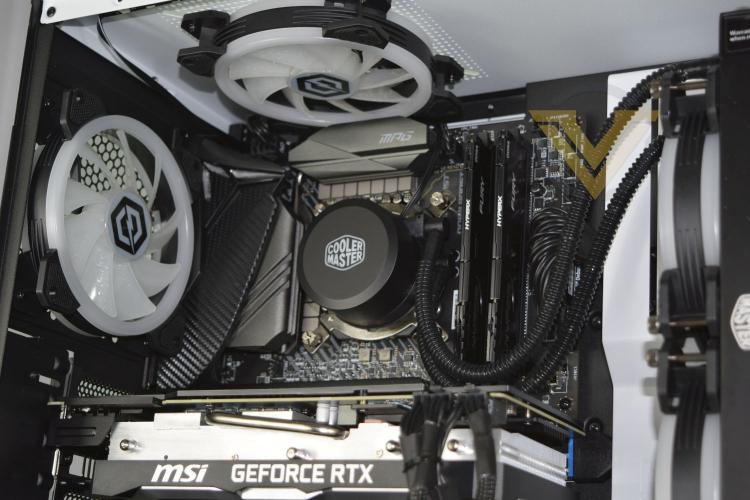 Intels Core i9-10900K is part of their flagship 10-core/20-thread CPU range operating at clock speeds up to 5.3 GHz. Its raw performance metrics are on par with the i9-10900K but dispenses with the chips integrated GPU, a fact thats unlikely to be a hardship in a desktop system with discrete graphics card. The i9-10900KF is a best-in-class solution for gaming due to exceptional raw clock speed, yet the high number of processor cores also makes it a flexible solution for gaming, streaming and workhorse applications such as video rendering.

NVIDIAs RTX 2080 SUPER was part of the 2019's GeForce RTX 20-series refresh and incorporates considerably more shaders than the RTX 2080. It supports all the current crop of RTX features including real-time ray tracing and DLSS 2.0, despite the Turing architecture now approaching two years old. It will on paper handily cope with all current generation games at the enthusiast standard of 1440p60, and prepare you for the next generation beginning with Cyberpunk 2077 this holiday season. This variant from MSI arrives with proprietary cooling and factory overclock.

Sixteen gigabytes of DDR4 memory is the recommended level for gaming systems today, and 3200MHz is a good spot for Intel-powered systems. AMD 3rd Gen Ryzen configurations would push to 3600MHz to compensate for relatively high CPU latency and leverage their large L3 cache. The relatively affordability of RAM at the present moment would lean us towards 32GB. HyperX meanwhile, a subsidiary of Kingston Technology, are a reliable memory manufacturer to opt for.

The storage configuration is robust for a gaming system, with ADATAs 512GB NVMe offering sufficiently high performance for a boot and primary gaming drive, while the 2TB Seagate Barracuda is appropriate for long-term storage of files and games less impacted by storage speeds. Were pleased to see that Cyberpower PC view an M.2 NVMe SSD as an integral part to a premium gaming system, something which we view as standard but not echoed across all quarters.

Last but not least is the CORSAIR RM750X PSU. Both hobbyist builders and major system integrators have often been guilty of scrimping on the power supply, but thats not the case in this instance. The RM750X is a rock-solid choice, and in fact the entire field of potential PSU options in the Infinity X10 RTX configurator are good choices for an appropriate budget level.