👤by Tim Harmer  Comments 📅09-09-21
Conclusion
Throughout this review weve compared the Cyberpower PC Infinity X115 GT with the most recently reviewed system, the Cyberpower PC ICUE Infinity, and that comparison has often turned out poorly for the latter. But theres method to this madness - the ICUE Infinity has parts chosen primarily for their looks, whereas the Infinity X115 GT is much more utilitarian when it comes to non-core components. Thats plainly observable by looking at promotional images, but its the greater than £500 price differential thats far more striking.

We should take into account that the prior review was made when inflation in the PC component market was still at its heights, whereas things have calmed down as a whole since then. Its therefore gratifying to see that when compared with street pricing the Infinity X115 GT was once again excellent value for money, even if some caveats remain.

More than that, however, the components appear to be remarkably well balanced, even more so than the ICUE Infinity. Intels i5-11400 is a great match for NVIDIA's RTX 3060, both operating with the required performance envelope for 1080p gaming from 60 to 144fps, with no overhead left on the table. Six cores seems like all you need for now, from both Intel and AMDs front-line desktop architectures.

We have some reservations over specific choices nonetheless, most notably the CPU cooler. Yes, a Hyper 212 or AIO liquid cooler would have pushed it over the psychological £1200, but as it stands wed find it well worth the cost and would be our primary post-purchase upgrade. Thats not a performance demand, but one borne purely out of making the noise levels much more comfortable without having to don headsets. Relying on MSIs Mystic Light app to control the ARGB fan lighting is also fine, but the software features and responsiveness are not nearly on the same level as CORSAIRs iCUE or Razer Chroma. That might be a little harsh though upon reflection.

The Cooler Master MasterBox MB311L is an admirable selection: a good mATX case with pleasant lighting via the bundled ARGB fans and scope for some important upgrades. Most importantly however, build quality appears to be spot on, and a mesh front will stabilize system temperatures even when the end-user is something of a cooling novice. There are lots of other options available through Cyberpowers Configurator but we cant fault this one being the default. 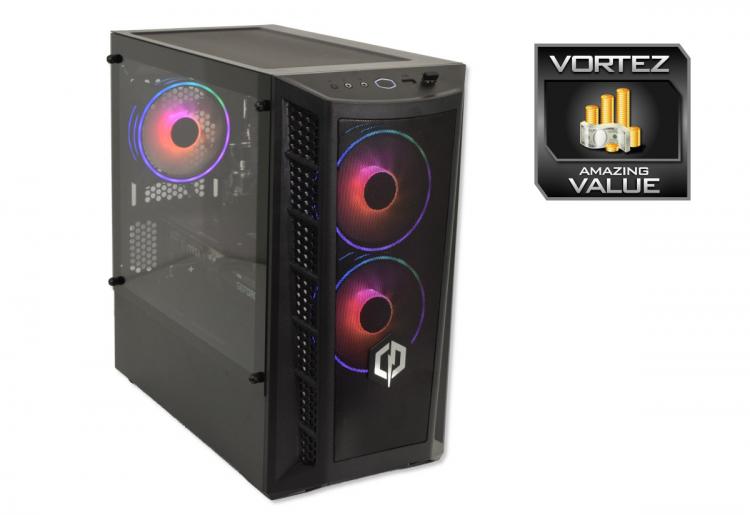 Perhaps the only reservation we might have (given the GPU market as it stands) is how well this system can serve as a baseline to then upgrade. We mentioned cooling could do with some attention and most 240mm AIOs should indeed be compatible; no further PCIe cards or M.2 storage can be installed, but theres scope for SATA SSDs and mechanical drives; the CPU cant be overclocked, but higher performing SKUs such as the i5-11600K can be installed, as can a slightly higher performance graphics card with both serving as in-place upgrades. Its not perfect, but wed be shocked if it doesnt outlive at least the first couple of years of college in one form or another.

No, if we have any criticism, it lies chiefly at the feet of Cyberpower PCs own System Configurator tool. Offering no indication of the expected model of GeForce RTX 3060 prior to purchase unless you pay a premium doesnt feel good as a consumer, and the huge price disparity in CPU upgrade cost between the Infinity X115 and X115 GT seems like either an error or cynical mark-up for a heavily reviewed system. Were sure there are good reasons that have justified these approaches but there must be a better, more consumer-friendly way to deal with it.

But thats not the fault of the PC, which as specced can be with you within seven working days.

Cyberpower PCs Infinity X115 GT is a return to form in a market still ravaged by inflated GPU costs and spotty availability. As reviewed, it has a well balanced set of components and just a hint of aesthetic pizazz without biasing in that direction, helping cash-strapped students get the most out of the budget. Best suited for modern 1080p gaming at high frame rates, it will excel for the near future even if no individual component sets the imagination ablaze with its possibilities. Just do yourself a favour and upgrade that CPU cooler, okay?