👤by Tim Harmer  Comments 📅22-12-20
Conclusion
Weve had the opportunity to review a number of Cyberpower PC systems in the recent past, and from the budgetary heights of the Infinity X10 RTX in August its good to have a reality check and take a look at a system which is a little more affordable. The Ultra 7 RTX Elite isnt quite mainstream but it does hit the right notes for an upper echelon mainstream gaming platform. Hitting the ground running on major new hardware launches also helps, as is the case in this instance.

By supporting mainly AMD Ryzen 5000-series CPUs and NVIDIA RTX 30-series GPUs, the Ultra 7 RTX Elite range satisfies that natural desire to be on the cutting edge of technology when it comes to an investment in new hardware. This configured variant, with Ryzen 7 5800X and RTX 3060 Ti, helps to control costs while still presenting a system that is more than capable of [email protected] and [email protected] gaming, both of which are ballooning in popularity as quality panels supporting Adaptive Sync technologies come down in price.

After a slow start, NVIDIAs RTX features (such as ray tracing and DLSS) are hitting a wider selection of titles at launch and the RTX 3060 Ti gets in at the ground floor of performance after a couple of technological iterations. Similarly, AMDs Ryzen platform is the first to support PCIe 4.0, making it fertile ground for in-place upgrades of both future-gen GPUs and high speed NVMe storage. The Ryzen 7 5800X takes the fight to Intels desktop platform like never before and is an excellent highlight for the system.

Sadly, the current state of the UK market means that these two components command the lions share of the systems BoM, leaving little room for components of equal stature. The NVMe storage and motherboard options are fine, while DDR4-3200MHz RAM is perhaps a touch slower than one would have liked, but the PSU and chassis picks werent quite up to the same level. Corsairs CV650M power supply in particular is ripe for an upgrade to a modular design that supports additional 4-pin EPS 12V and PCIe connectors.

Assembly was once again up to Cyberpower PCs usual excellent standard. In particular, we should give credit to them for correct selection of M.2 slot for the SN550 NVMe SSD, leaving the PCIe 4.0 slot free for later upgrades; its a small thing but something that sticks out. Cable management was good, compensating for the awkward nature of using a non-modular PSU. The Seagate BarraCuda was uninitialised when Windows 10 had finished its setup process however, and that could fox novice PC users. In fact, our only significant reservation turned out to be using one PCIe cable for the dual 8-pin GPU power rather than two; this is a >200W TGP card after all.

Performance was great, trading blows with the i9-10900KF/RTX 2080 SUPER system reviewed earlier this year but at a considerably lower price. What a difference a few months have made. Wed comfortably recommend the Ultra 7 RTX Elite for 1080p 144Hz and 1440p 60Hz gaming, particularly if its possible to take advantage of a G-SYNC certified panel. However, while compatibility with ray tracing is near guaranteed, you will want to lean heavily on per-game DLSS 2.0 support to boost frame rates to a comfortable level. 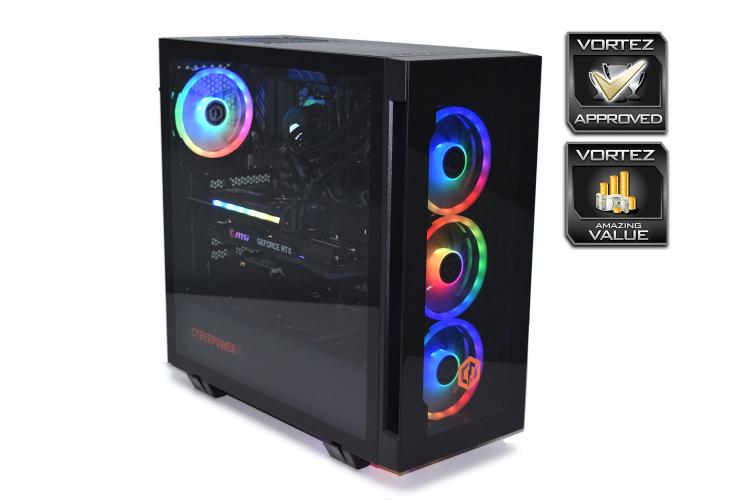 So we come to one major sticking point: availability. Systems powered by both AMD's Ryzen 5000-series and NVIDIA's RTX 30-series will be affected by the stock levels of both in the UK and, in this instance, at Cyberpower PC specifically. Supply issues appear to mean that Cyberpower aren't willing to a specific make and model of RTX 3060Ti (or 3070, 3080 etc.) on the configurator page, and preorders have a three week expected shipment delay (January 12th) at the time of publication.

That being said, this may turn out to be moot. Both Ryzen 5000-series and RTX 30-series components are extremely hard to find through retail channels, inflating prices even where they become available. Buying as part of a complete system through system integrators such as Cyberpower PC might be the best solution as their stock levels have tended to weather spiking demand in individual components. Still, while Cyberpower list these parts on pre-order currently, even they arent immune to the tides of COVID-19 and Brexit in the beginning of 2021.

Cyberpower PCs Ultra 7 RTX Elite brings together AMDs Ryzen 5000-series and NVIDIAs RTX 30-series in a range of configurable systems that are keenly priced and assembled with care. While the selection of GPU brands isnt currently wide, other aspects of the final system can be tinkered to your heart's content. If youre in need of a complete system decked with the latest hardware for excellent gaming performance and backed by a 3 year RTB warranty then you should absolutely spend some time on the Configurator. Assuming they can meet the quoted price and timely delivery dates, they more than warrant both Value and Approved awards.

There are currently 622 user(s) online:
Google