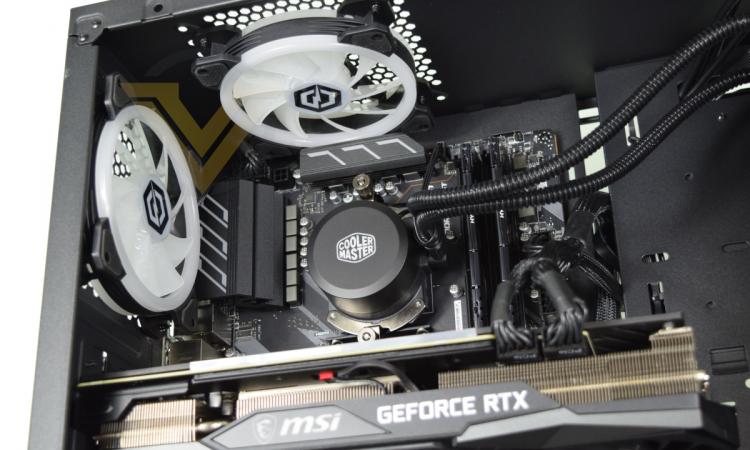 AMD launched the Ryzen 5000-series in October to an overwhelmingly positive response. Their Zen 3 architecture maintained the high core count of the mainstream desktop Ryzen range - support for up to 16 cores and 32 threads - but crucially also greatly improved the key instructions per clock metric through larger caches and lower internal latencies. Lessons learned in the development of other 7nm products have maintained and increased operating frequencies across the processor. All in all, its a major step forward from the 3000-series that is set to seriously impact the dominance of Intels 10th Generation processors on raw performance alone.

The Ryzen 7 5800X is an 8-core, 16-thread mainstream/gaming processor that tops out at 4.8GHz under dynamic overclocking schemes. This new range of processors are ideal for a gaming paradigm that is finally starting to leverage more than four CPU processor cores whilst still being heavily reliant on high IPC and core clock speeds. Like the previous generation they also support PCIe 4.0 for graphics and NVMe storage, both of which are open standards currently exclusive to AMDs desktop platform. These chips are widely understood to be more than a match for the comparable Intel 10th Gen Comet Lake processors in the key gaming workload, something that even the much-vaunted Ryzen 3000-series couldnt boast.

Just before AMDs biggest launch of the year NVIDIA revealed their GeForce RTX 30-series. The Ampere architecture is the most ambitious yet conceived by the green team, increasing the complexity of the die greatly to expand real-time ray tracing capabilities while maintaining class-leading rasterisation performance. Transitioning to an 8nm lithographic node has allowed the RTX 30-series to remain within somewhat reasonable power limits in mainstream segments, while the high-end RTX 3090 sets new performance records in all aspects of GPU-based number crunching. Advances in hardware video encoding for game streaming and low click-to-screen latency gaming also make members of the RTX 30-series as a whole tempting propositions outside of raw frames per second.

A GeForce RTX 3060 Ti is the current entry-point into the series, featuring 4864 CUDA cores and 8GB GDDR6 memory. It packs 3rd Generation Tensor cores (used for DLSS) and 2nd Gen Ray Tracing cores, improving capabilities and performance of RTX-specific features in games and supported applications. Performance is comparable with that of the RTX 2080 Super, indicating how significant a leap this generation is over the previous.

This Cyberpower PC system was supplied with MSIs RTX 3060 Ti Gaming X Trio. The card utilises a 3-slot triple-fan cooling solution, oversized PCB, aluminium backplate and dual-8-pin power delivery, making it appear to be a premium design well beyond mid-range aspirations. Cooling should be ample enough for pushing Boost Clocks well into the 2GHz range, but the size of the card will put constraints on compatible cases. The Cyberpower configurator for this range does not allow the customer to select a specific brand and model of GPU, as a result the RTX 3060 Ti model (or RTX 3070, or 3080 etc.) supplied may vary from the one in this review.

Both the RTX 30-series and Ryzen 5000-series are currently extremely difficult to find through component retailers, but somewhat paradoxically have been slightly more readily available through system integrators as part of custom systems. Were not privy to why this might be the case, but the reality is that if you are looking to assemble a high performance system with the latest technology but arent too fussy about the exact component selection then a system integrator is a route you may wish to go down.

MSIs X570-A Pro motherboard is pitched at the more affordable end of the spectrum compared to their out-and-out gaming designs while still being in the mainstream segment, but still supports critical features including overclocking, PCIe 4.0 NVMe storage, PCIe 4.0 graphics and full I/O bandwidth to the chipset. Its an ideal match for AM4 processors up to the Ryzen 7 (8-core) range, offering overclocking headroom if desired with a cut-down feature-set a tier below deluxe productivity motherboards. The selection emphasises the baseline affordability of this system range.

The CPU is kept in check by Cooler Masters Master Liquid Lite 240. This closed loop liquid cooler is mounted in the front rather than roof of the chassis (where a 240mm rad isnt supported) and the 27mm-thick radiator should be ample for the Ryzen 7 5800X. Two Cyberpower branded 120mm fans push air through the rad, and the orientation of cooler and fans means that the GPU will be fed warmed rather than ambient temperature air.

Cyberpower PC have selected HyperXs FURY DDR4 3200MHz memory as standard for this system. This doesnt hit the performance sweet-spot of approaching DDR4-4000MHz for Ryzen 5000-series chips, but diminishing returns do start to kick in. Sixteen Gigabytes is plenty for gaming and some productivity work; opting for more or faster memory again starts to eat into budgets without necessarily offering much more than is needed for the target market.

NVMe storage is currently the go-to for even mainstream systems where just a few years ago it was the exclusive province of performance-oriented setups. This Ultra 7 RTX Elite is equipped with a 1TB SN550 NVMe M.2 SSD from WD (formerly Western Digital) thats part of their Blue range; not as fast as the PCIe 4.0 counterparts, but still capable of up to 2.4 GB/s read and a healthy 1.95 GB/s write. This capacity is more than enough for the operating system, productivity applications and a host of games, but just in case you can also pick up an optional mechanical HDD for storage of data infrequently accessed such as video or photos.

The system is powered by a Corsair CV650M. This 80PLUS Bronze-rated non-modular PSU is perhaps the one aspect of the system that is aggressively oriented towards the budget end of the spectrum. It certainly meets all minimum requirements, but will make upgrading a little more difficult than it strictly needs to be.

All in all, the system on review is an amazingly well-rounded configuration with parts that complement each other while also offering reasonable scope for future expansion.