👤by Matthew Hodgson  Comments 📅28-11-19
Conclusion
If youre spending £2500 on a computer, without even considering the peripherals, it needs to really stand out from the crowd, both in terms of performance and aesthetics. We want the RGB to flood the room and the performance to crash through any task we can throw at it. In some aspects, the Hydro-X Ultra excels, but others it falls short of the mark.

When you open up your new system and power it on for the first time, youll be, almost quite literally, blown away by the RGB lighting inside. Everything sparks into life at the same time and the flood of rainbow comes pouring out of every possible opening. I tried to count the RGB LEDs inside but Ive never counted that high before. The fans, the RAM, the waterblock and the motherboard all throw out their own lighting, and then CyberPowerPC have gone and thrown in another 4 Corsair RGB LED strips just to brighten things up further. Lets just say, if youre not a fan of RGB then you shouldve stopped considering this PC a long time ago.

Performance in creative tasks such as video or photo editing will be munched up by the Ryzen 9 3900X, which is kept below 70°C by the custom watercooling loop, allowing the processor to maintain high Boost speeds across the board. However, 16GB of RAM, especially with todays pricing, frankly isnt enough for a £2500 system. We quite often exceed 16GB of RAM with day to day tasks, and games are often asking for a recommended 12GB, so it wont be long before 16GB is recommended. Having said that, the 1TB NVMe 4.0 Corsair SSD, with a 2TB HDD for bigger storage, offers some incredible speeds, bringing our boot times down to around 10 seconds, or in other words, barely noticeable.

Gaming performance from the AMD Radeon RX 5700XT isnt terrible, far from it, but we definitely expected better for £2500. 4K gaming in any AAA title is probably out of the equation with this card, and 1440p high framerate is pushing it somewhat, where this kind of system should really be excelling. Wed really like to see an RTX 2080 SUPER at this price range, where youd see roughly 15-20% better performance. Also, in terms of the GPU used, mounting it in an upright position, youd typically expect a GPU cooler with multiple fans and some RGB to show off through the tempered glass but CyberPowerPC have used a blower cooler.

The custom Hydro-X watercooling loop from Corsair looks absolutely fantastic, it reflects the RGB lighting around the case and gives a real professional appeal to the whole assembly, but it does also add quite a considerable cost, at around £350 from what we can see, and thats just to cool the CPU. While it keeps the processer under 70°C, weve seen similar performance from Corsairs H150i Pro RGB, at around half the cost, which would open up more budget for additional RAM or a jump up in GPU performance. CyberPower have also mounted the radiator in the front of the case, taking up all three of the 120mm intakes at the front, so the other components are breathing in hot air; there are a pair of 120mm intakes at the bottom but their effectiveness was questionable, especially if youre sitting the system on a carpet. The single 120mm exhaust at the rear isnt enough for a system as powerful as this, which is probably why theyve also used a blower-style cooler on the GPU, to help get air out of the rear as best as possible. Because of this, the system does get loud, much louder than a custom watercooling loop would lead you to believe.

All things considered, the Hydro-X Ultra is certainly a head turner and would look fantastic on your desk but theres been too much focus put onto the aesthetics and not enough on actual, usable performance. We've also found almost identical systems for £600 less at other system integrators, minus the custom watercooling loop, which is a hefty price to pay for some CPU cooling. 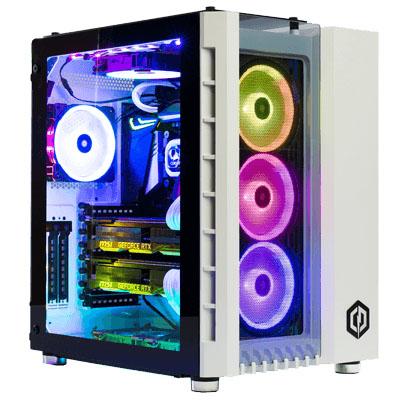 If you like RGB, and I mean really really like RGB, this PC should absolutely be considered but wed want more RAM and a more powerful GPU to really recommend it.