Thinking up new and innovative designs is a tough task for case designers but this case appears to break convention and adds in some features which arent just gimmicks. The provision of a pre-installed liquid cooler is inventive and were surprised it hasnt been done before, but further to that, Deepcool has chosen to mount the radiator parallel to the motherboard  making great use of space and enabling full view of the RGB cooling fans. Marrying up to this cooler, Deepcool has included a transparent pipe at the front of the chassis which allows the user to see the liquid flow from this cooler. While this is purely a cosmetic feature, its one we havent seen before and it looks innovative!

Installing hardware inside New Ark 90 is without any problems due to the expanse within. This case is capable of handling a plethora of high-end kit with only severe limitations really affecting water cooling radiators. Storage is decent, offering support for three 2.5 or 3.5 drives (The HDD cage can also accommodate 2.5 drives) and those wanting to super-size their motherboard can fit an E-ATX model onto the motherboard tray.

If we look at thermal performance, New Ark 90 does suffer somewhat and that is primarily due to configuration of the cooling fans attached to the chassis. Both are positioned as exhausts  one on the side of the HDD cage and the other in the usual spot at the back of the case. The omission of a push-pull configuration and the decision to attach the front cooling fan to the HDD cage (for obvious aesthetic reasons) means that cooling is mediocre. However, this can be easily improved by simply adding in a cooling fan at the front and positioning it as an intake to create airflow across the system, and this can be achieved using the RGB fan below the radiator. 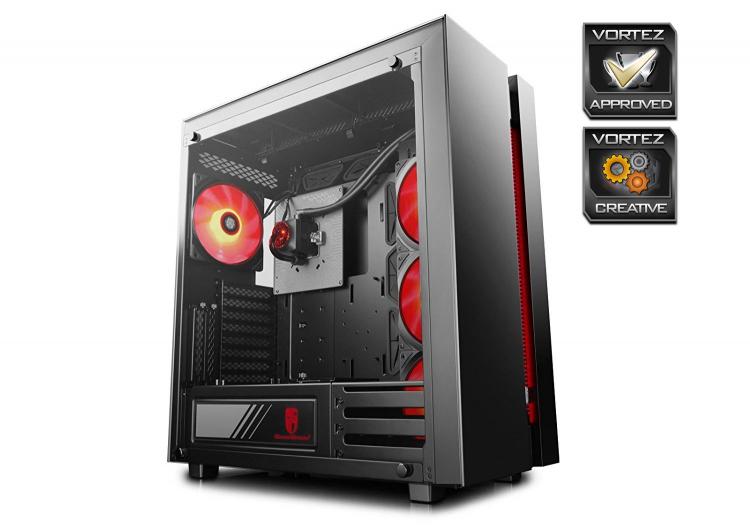 The option to have the graphics card rotated amplifies the creativity with New Ark 90 but there is a caveat. Deepcools own riser cable is mandatory in order to take advantage of this feature  grabbing a riser cable from another vendor off Ebay will not suffice (as per our video review) the standoffs within New Ark 90 are specific to Deepcools riser cable dimensions and even if you happen to find a cable with equivalent mounting holes, the connector needs to be rotated as the standoffs are horizontally fixed. Its evident that this type of feature is likely to feature on many more new cases and so its sensible for manufactures to allow for variable sizes of riser cable in their case design. Hopefully well see more flexibility in this area on forthcoming releases, so that system builders can make use of their own cables.

The outright cost for New Ark 90 sees the case listed for £299 GBP / $299 USD / $429 AUD  which might be initially alarming. Were this to be the cost for just the enclosure on its own, New Ark 90 would be up against the ultra-high-end of the market, however we need to factor in the fact our case comes with a pre-installed cooling solution, plus a bag full of RGB cooling fans. Adding in a 240mm liquid cooler to a case costing 150-200 is more or less what we have in Deepcools offering and it isnt a bad deal at all.

Deepcool may not be the first choice in a market dominated by other household names, but their efforts with the New Ark 90 should not be ignored. This case is packed with features which are inventive to say the least!

Cons
- Heavy
- No USB 3.1 port
- Does not include riser cable
- Proprietary riser cable required
- Mediocre cooling performance
- Lacks fan speed controller
- No dust filter at front of chassis
Click here for an explanation of our awards at Vortez.net.