👤by Matthew Hodgson  Comments 📅05-01-18
Conclusion
Focussing on the aesthetics of the computer case, as well as the bundle, the red and black colour scheme has been carried throughout. If youre able to grab a dark desk and black computer chair, youll be instantly set up with a very attractive battle station.

DinoPC claim that the PC is capable of excellent 1440p gaming and entry-level 4K. We found that 1440p was hit and miss, with some games achieving 60fps in our tests, while others depended heavily on the title and on-screen scenario, however, dropping the image quality would counter these effects. 4K gaming, on the other hand, should be avoided. We feel the lack of performance at the 3840x2160 resolution is largely dependent on the 3GB of VRAM on the GTX 1060. Having said all of that, gaming performance at 1080p was excellent, achieving 120+ FPS in two of our tests, and, more importantly, delivering 63 FPS in DEUS EX which was the lowest of all 6 tests.

The AMD Ryzen 1400X CPU delivers ample performance in multithreaded tasks while the 8GB of DDR4 RAM allows a reasonable degree of multi-tasking. The PCMark, Cinebench and Handbrake tests go some way to proving this.

Due to the HDD installed within the system, instead of using some kind of SSD as a boot drive, we noticed extended waits while loading up applications and booting into Windows. This is understandable at this price point, and can be configured at a later date to include a solid state drive.

The quiet, reliable and efficient PSU located at the bottom of the PC is more than capable of delivering a steady stream of power while also providing ample efficiency to keep the bills down, thats a bonus to anyone, not to mention the excess power available for any extra drives you may want to add. 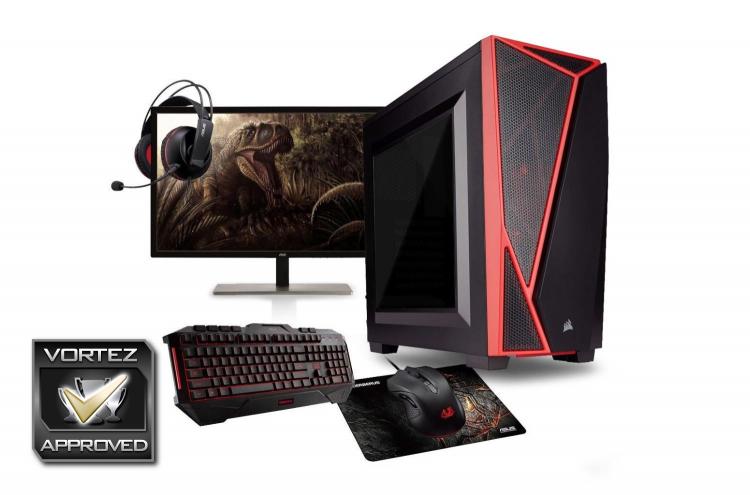 As an entry into PC Gaming, without destroying your wallet, this offering goes a very long way to being about as good as it gets.