The GAINWARD GTX770 Phantom has impressed from the outset. From the packaging to the product itself, you can't help but be impressed with the design. If there were any short comings it would have to be that brown PCB. While it may look black through a PC case window, the owner will still know it is brown. In fairness though , GAINWARD are not the only company to utilise this silk screening colour.

The main feature of the card is of course that massive cooler and here is where the Phantom separates itself from the rest of the field. The great design with the removable fans we thought was innovative and while it is not the first time we have seen removable fans/cleaning considerations, none have been so easy to maintain as this. The thumbscrews could be a little bigger but then my fingers are not as nimble as they once were!

That super efficient cooling enabled us to extract a great overclock from the card. Making this more impressive is the fact the card already arrives pre-overclocked. It may be argued that GAINWARD could have overclocked the card further at the factory but then that wouldn't leave us any fun would it?

While not specifically niggles with the card itself, we were dismayed to see that a card that is clearly aimed at the enthusiast market had stickers in place to prevent, or at least deter the heatsink removal. As we have shown, this was necessary with our sample due to the copious amounts of TIM spread across the core which hindered temperatures slightly. A quick clean and re-application saw temps drop and as GPU BOOST now runs alongside GPU temps, it is the temperature which could make the difference between a good overclock and a great one. 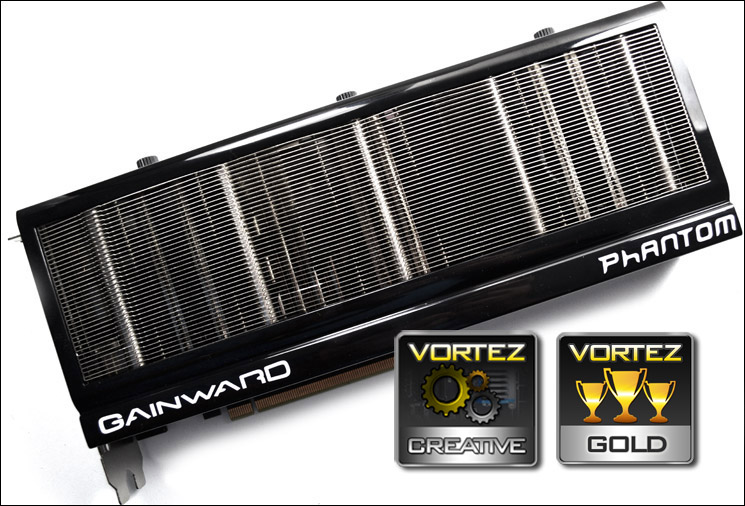 Overall though we were thoroughly impressed with the GAINWARD GTX770 PHANTOM. We are however reluctant to give it our top award, not through any fault of GAINWARD's you understand, but because underneath all of that innovative cooling still sits a GTX680, albeit tweaked. If however you are looking to jump on the NVIDIA bandwagon and cannot stretch to a GTX780, we highly recommend taking a look at the Phantom. For this reason and because of the cooling design this product is deserving of our Gold and Creative awards.

To summarise:
If you are on the lookout for a new GPU that is different yet cool, sophisticated with enough grunt to hold it's own, regardless of game settings, the GAINWARD GTX770 PHANTOM has got what it takes. Highly recommended!