Goes Like Hell! Not simply 'OC', 'Super' or even 'Ultra'. This edition, as the name implies goes faster than anything on this material earth, matched only by beings from an unearthly plane of existence. How true this is we will see later in the review but with a heavily overclocked NVIDIA GTX780 at it's heart, coupled with the innovative and powerful 'Phantom' cooling design, on paper at least you would expect a graphic card of this nature to very fast but hopefully not as hot as hell!

We loved the new Phantom cooler when we first examined it in our Gainward GTX770 Phantom Review so we know just how capable it is. It did however seem a little over the top to put such a fine example of cooling prowess on what is essentially a tweaked GTX680. The cooling power of the Phantom deserved a bigger challenge so to that end Gainward not only offered up the GK110 core - the same core used on NVIDIA's finest GTX TITAN but also overclocked the 'hell' out of it. With the reference speeds of 863/6008 (core/memory) clocked to 980/6200 it is one of the highest factory overclocked cards available (at time of review). These overclocked figures result in a GPU BOOST 2.0 clockspeed of 1033MHz. A GTX780 running at 'stock' over 1Ghz? Goes like hell indeed! 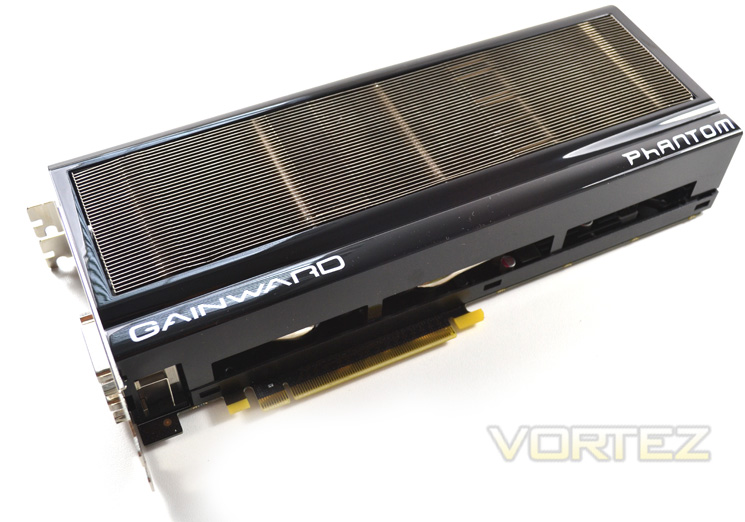 Memory overclocking is also extremely important with the new range of graphics cards. This is something some manufacturers forget or at least appear reluctant to address because while these factory overclocked cards come with the core overclocked, few have the memory tweaked from reference speeds. Thankfully this is not the case with the GTX780 Phantom 'GLH' as the memory also receives attention, albeit with a mild 200MHz (effective) overclock. We know that there is much more speed that can be obtained from those delicious Samsung chips but any factory overclock is welcomed, especially on the memory.

Previously know as 'Golden Sample' cards, the 'Goes Like Hell' range are still heavily stressed by the engineers at Gainward to ensure the clockspeeds are rock solid stable. Some cores will inevitably fail the test and be dropped further down the range. Those that meet the benchmark clockspeeds are reserved for the 'GLH' range. This is simply called speed-binning and has been occurring for years not only with GPU manufactuers but perhaps most notably in the CPU arena where the likes of Intel will speed bin their CPUs with the best creamed from the proverbial silicon pile. We hope to test just how much those engineers left in the tank of this GLH edition but given the already very large overclock, we don't expect there to be a lot!