The time is almost upon us. Over 6 years in the making and AMD finally have a totally new CPU architecture to offer to the general public. This is a big deal, and if you talk to almost anyone who carries an interest in PC hardware youll find theyre familiar with the code name Bulldozer, which is used to describe AMDs new 32nm CPU core design. The Bulldozer cores are going to be put to use in server-based chips (Interlagos and Valencia) with up to 16 cores on a chip, but the main processors that are of interest to us, and hardware enthusiasts around the globe are going to be the CPUs code named Zambezi, with the official moniker of FX. They will offer 4-8 Bulldozer cores on a chip, and clock speeds of up to 4.2GHz (with Turbo Core, base clock 3.6Ghz over 8 cores) this year, with further models expecting to reach 4.5GHz (base clock 3.9GHz over 8 cores) by Q1 2012. Besides increased cores and a new architecture, there are numerous other advantages to the FX CPUs that have been listed in our news articles and all over the web, but I wont list them here. There will be a full round up when we get our hands on a new chip. Thats right, theyre not released yet, and although there is no firm release date, October/November 2011 is looking quite likely at this time.

Why am I talking so much about CPUs in a motherboard review when theyre not released yet? The reason is that today Vortez has for you the first 9-series AM3+ motherboard that we have got our hands on, and its pretty special. With manufacturers being given the design specifications for the Scorpius platform (Thats the 990FX/X motherboards + Zambezi CPUs + Northern Islands GPUs) some time ago, the motherboards for the 9-series chipset have been ready and waiting whilst the new CPUs have been delayed. With backwards compatibility to AM3 CPUs, the boards have been released before the new AM3+ processors, and so this is why we wont be able to fully judge the Gigabyte 990FXA-UD7 until we have our hands on a true Bulldozer-based CPU. However, we can certainly take a look at its features and performance using an AM3 CPU (in this case AMDs flagship 6-core 1100T) in the meantime. 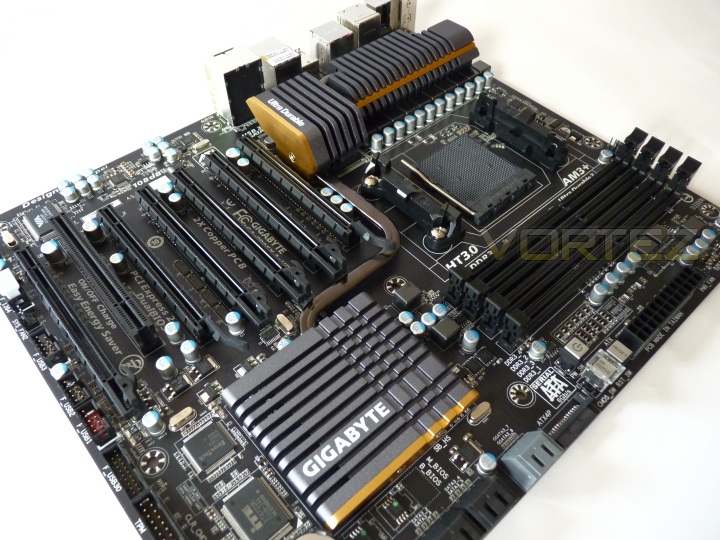 I mentioned that this motherboard was special. Thats because its GIGABYTEs highest performance and most feature-rich AM3+ model. A flagship, if you will. A board that is designed to be better than the competitions finest offerings, and show consumers what can be done with the ATX format in preparation for the arrival of the FX CPUs. The 990FXA-UD7 sports a whole host of juicy mainboard features from across the entire GIGABYTE catalogue, as seen below. GIGABYTEs own description of the motherboard also follows. Read on to find out how we tested, what we found and importantly whether wed recommend the 990FXA-UD7 to you.