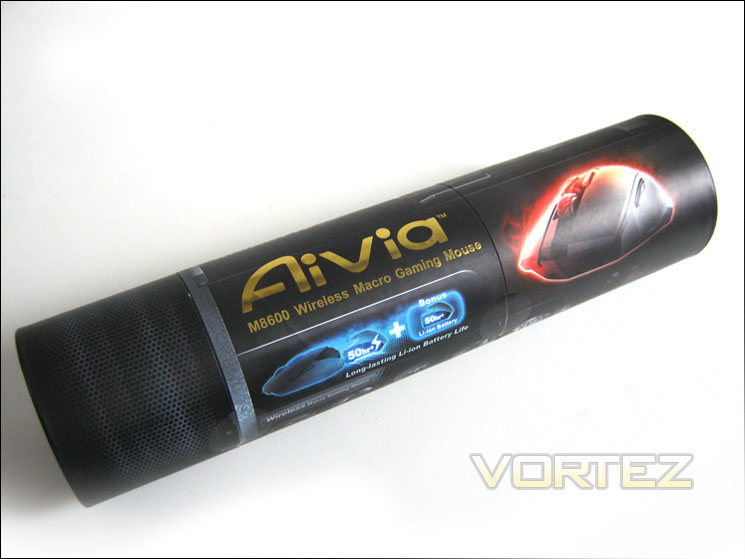 Product Packaging
Unusually for a mouse, the product arrives in a cylinder rather than a box. The tube is however very sturdy and eye catching with a picture of both the mouse and product title in embossed gold. The main features of the mouse are also displayed on the matt black package design. 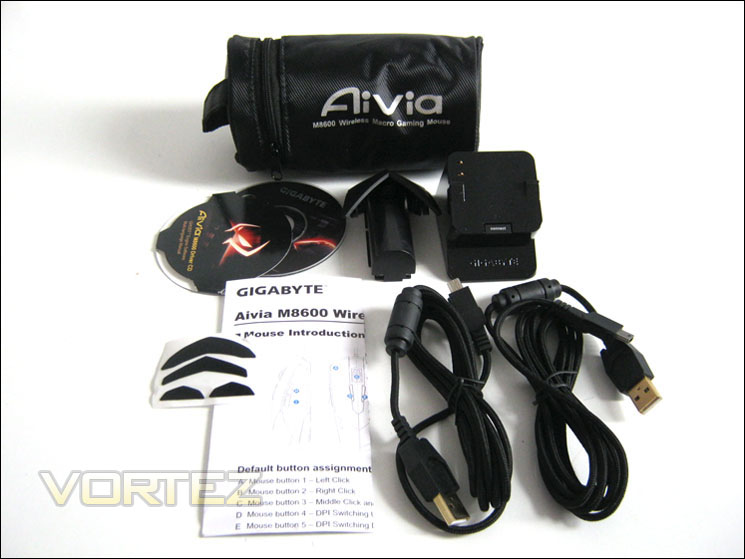 Package Contents
The cylinder is split into two separate compartments, the uppermost holding the mouse and the lower segment holding the charger, and spare battery. You will notice two gold plated and braided USB cables, one is for the charger and the other is to connect the mouse to the PC should you wish to use it as a wired mouse rather than wireless. A mini CD contains the driver/utility software which we will examine later and a spare set of Teflon feet along with the user manual round off a very complete accessory list. Note that there is also a padded pouch which can be used to transport your rodent and accessories to a LAN party which was a thoughtful inclusion. 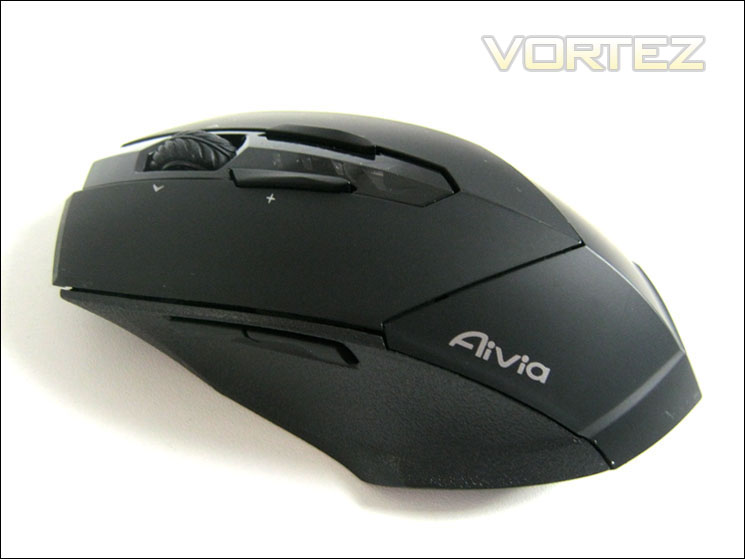 Aivia M8600 First Look
Here we get to see the Aivia M8600 mouse for the first time. First impressions are good with the aggressive styling carried over from the Aivia K8100 keyboard. How this translates ergonomically remains to be seen but there is no doubting that GIGABYTE has granted their designers the freedom to express themselves. 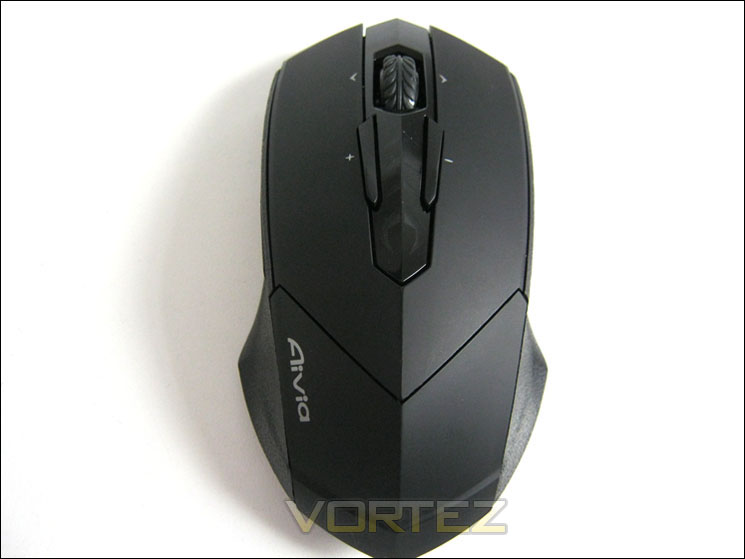 Top Down View
From a top down view, we can see that this mouse is not the widest of mice out on the market, indeed it could be described as being quite slim. While the mouse does get a little more girth towards the wheel area, the rear of the mouse is much slimmer than most mice if you exclude the base. Interestingly, GIGABYTE has opted not to smooth off the palm area of the mouse instead leaving a very pronounced ridge along the spine. 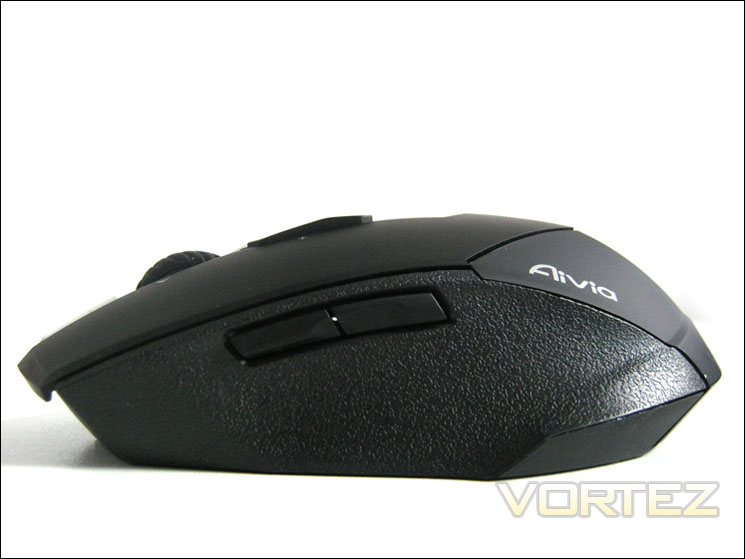 Left Profile
From this angle the mouse actually looks quite streamlined save for the overhanging mouse 1 and 2 buttons. Only the bulky wheel and the DPI buttons to the rear spoil the aerodynamic profile. The Aivia M8600 features a total of 9 buttons, most of which are configurable via software which we will cover later in the review. In brief, there are the main mouse 1 and 2 buttons, two further buttons to both the right and left sides of the mouse and the two CPI +/- buttons. The mouse wheel is also clickable along with left and right tilt detection. 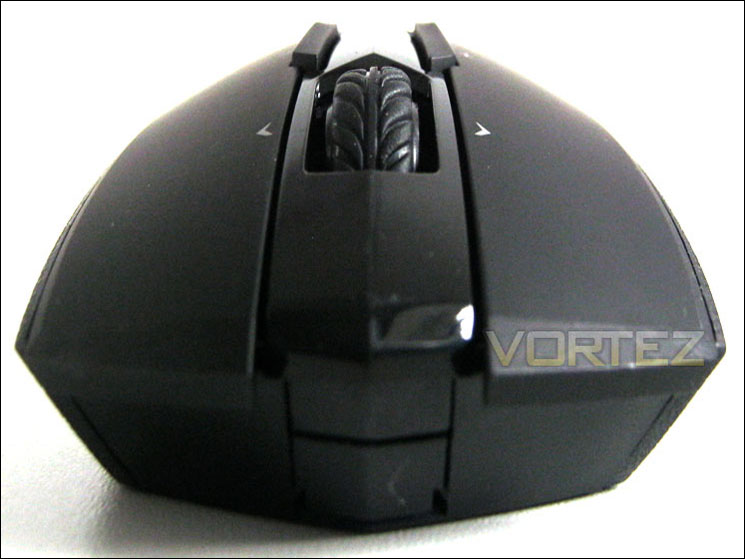 Mouse Front
The mouse wheel resembles a, er, wheel! Well a tyre to be more precise which is much wider than most mice we have tested yet as you would expect slip free. The two DPI adjustment buttons are a little too pronounced for my tastes which may be an issue for those who favour the palm grip. Those who rest the full length of their fingers across the mouse will certainly catch the buttons during gameplay as the second knuckle has a nasty habit of knocking one of the buttons which is less than ideal. For most though the quick and easy access to DPI adjustment will be a God send in the heat of battle. You will either love this feature or hate it. 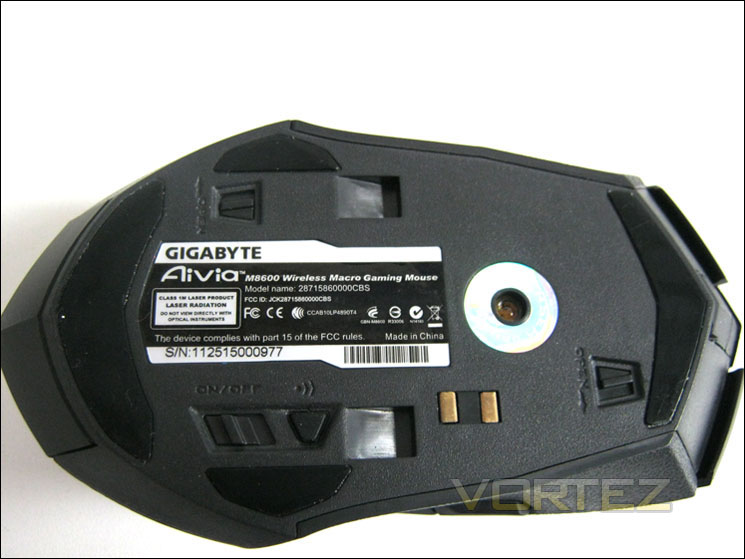 Mouse Base
Flipping the mouse over, we can see that its belly is awash with switches. In the picture above the top most switch is for the battery release. Right-most is the cable lock/release switch and towards the bottom of the mouse are the on/off switch and wireless connect button. The mouse is pre-fitted with four glide pads but should these wear out GIGABYTE have thoughtfully included a spare set. 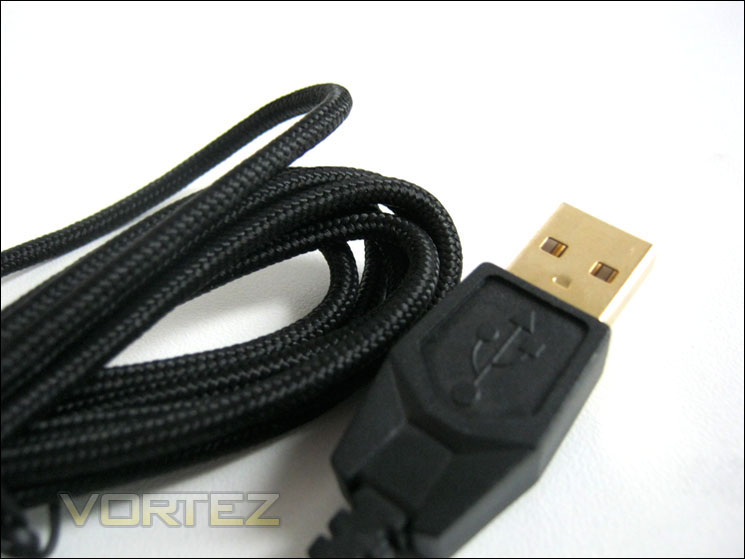 USB Connector
As with most high-end peripherals, the USB connector is gold plated which supposedly enhances the connection and durability but in all honesty I have yet to have a standard steel USB plug fail me. I can see the point of high end analogue audio having this feature but other than keeping up appearances I dont believe having the USB gold plated has any tangible benefit other than for aesthetics. Im a big fan of braided cables and thus I am happy to report the GIGABYTE Aivia M8600 does not disappoint with both USB cables being fully braided.