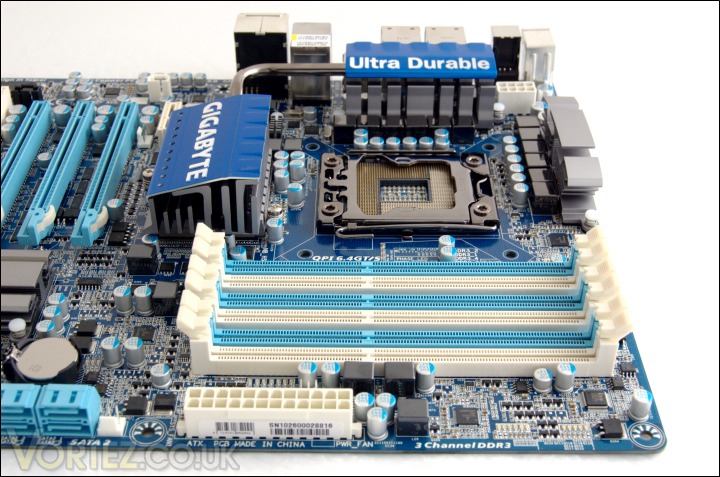 The CPU and RAM area
The CPU and RAM upper section of the motherboard is typical of most X58 motherboard. The standard 6 DIMM slots are present, supporting triple channel memory. It's good to see that Gigabyte haven't compromised on the number of slots like they did on the original X58-UD3R. The LGA1366 socket is positioned centrally so lower latencies can be expected. The Loates socket also has the gun metal finish. 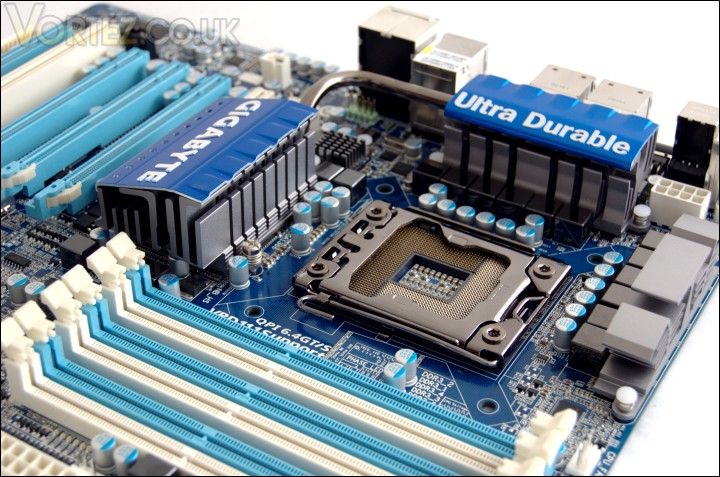 The VRM & power circuitry
The UD3R uses a 12 power phase VRM circuitry and the 12 chokes surrounding the CPU area is representative of that. There are 2 more for the Northbridge and Southbridge while the memory has a dedicated 3 phase VRM. Surprisingly for a budget board, the power design is akin to the GA-X58-Extreme in Gigabyte's original line up of motherboards and the more recent GA-X58A-UD5 (Rev 1.0) so excellent overclocking headroom can be expected. The power circuitry also forms part of the Ultra Durable 3 marketing. The motherboard uses Japanese Solid Capacitors boasting 50,000 hours of operation and the Ferrite core chokes ensure greater efficiency over iron core based chokes. Another feature are the Lower RDS MOSFETs for lower resistance, reduced power consumption and heat generation. 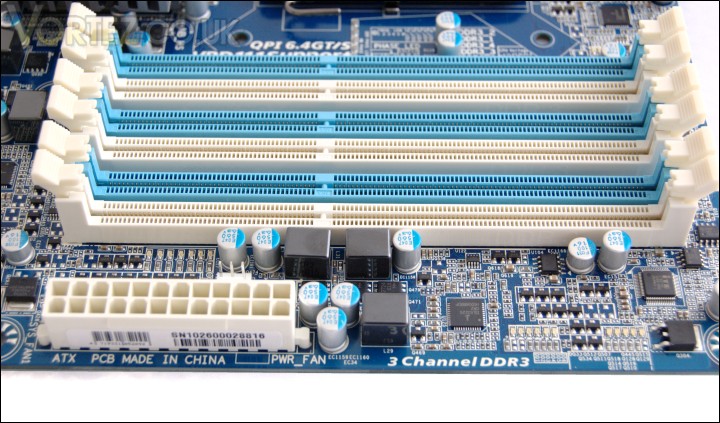 The onboard LEDs
On the edge of the motherboard, Gigabyte have implemented various LED indicators. On the right are the blue OC-Alert LEDs that indicate the level of CPU overclock from low to high. Next to it are the phase LEDs, indicating the number of power phases being used. Behind the 24pin motherboard ATX power connector are another set of LEDs for the NB and DDR phase levels, and the DDR voltage. On the other side of the DIMM slots are two more sets of LEDs for the CPU temperature (two levels) and CPU voltage (three levels). There is a last set of LEDs for the Northbridge temperatures but these are located next to the X58 chipset heatsink. 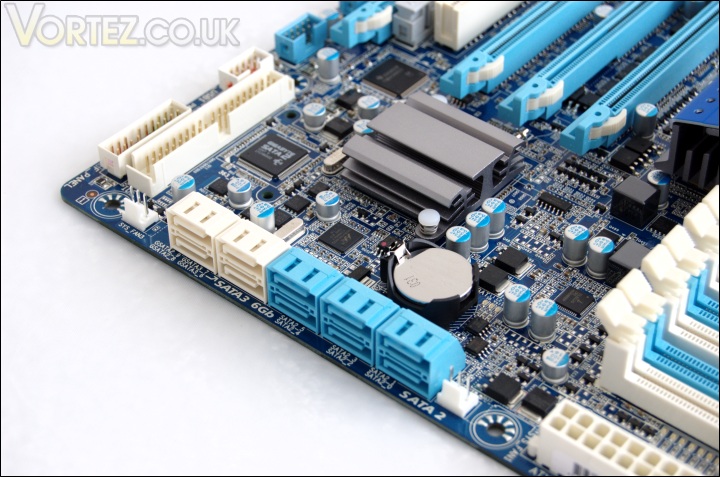 The SATA ports
The Gigabyte motherboard boasts an impressive 10 SATA ports, six of which are derived from the Intel ICH10R controller. These are easily recognisable by the blue colour and the SATA2_1-6 labels. The white ones immediately adjacent are labelled GSATA3_6/7, and operate at 6Gbps thanks to the Marvell 9128 controller. Although the controller supports RAID 0 and RAID 1, Gigabyte advise against using the former on SATA III SSDs. The last two white ones are standard SATA II ports that run from the Gigabyte SATA 2 controller. The latter is also responsible for legacy IDE support. The ports are all mounted horizontally for much better cable management and access.

The front panel headers
The usual array of front panel connectors can be found at the base of the motherboard. Starting from the bottom left, there is the front panel chassis headers. Rather than using the "Q-Connector" method ASUS have adopted, Gigabyte simply colour code and label their pins. The enclosed connector ensures that the cables don't come loose or bent. Above that is an IDE connector supporting up to two IDE devices such as hard drives and optical drives. To the left of the front panel headers are three USB headers conforming to USB 2.0/1.1 standards. Each support 2 USB ports but an additional USB bracket may be required. The one in white has the ON/OFF charge feature which not only enables faster recharging of devises through the 3x USB Power feature, but also allows devices to be charged when the PC hibernates or shuts down. Next to those is a sole 4 pin fan header. One other 4 pin fan header is located at the top of the motherboard and two 3 pin headers on the right hand side. Lastly to the left is a legacy floppy disk drive connector for those who still have a use for one. 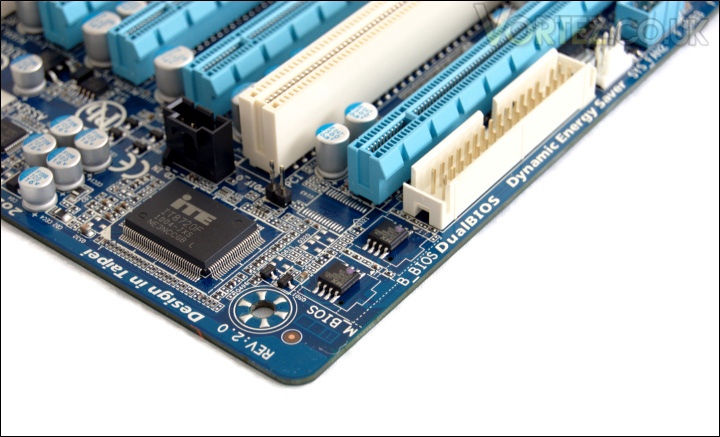 Dual BIOS system
In the corner, the UD3R has a dual BIOS system for protection. Their patented idea works by having one BIOS automatically recover data from the other should the latter crash or fail. This is a definitely an innovative idea that is normally reserved on higher end motherboards with competing manufacturers, so I'm glad Gigabyte have this on their lower end solutions. The BIOS chips are soldered to the PCB and thus cannot be removed unlike on ASUS motherboards. 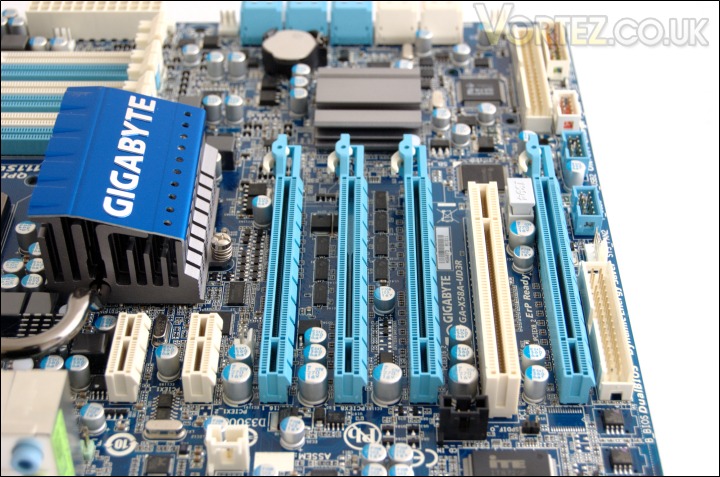 The expansion slots
Finally we come to the expansion slots and Gigabyte have somehow made space for 7 slots. The top two are the PCIe x1 slots. It's strange that Gigabyte even opted for the top one as devices would end up coinciding with the large Northbridge heatsink. Further down are 4 PCIe 2.0 x16 slots and a white PCI slot. The first and third PCIe 2.0 x16 slots operate at the full x16 link width while the second and fourth slots are limited to x8. However, in the situation that either of the last two are populated, the first and third slot will reduce to x8 link width respectively. Up to three cards are supported for SLI and CrossFireX, and for dual card configurations, the first and third PCIe x16 slots are recommended. Users have to be aware that installing a dual slot card in the bottom slot will potentially coincide with cables and that a case with 8 PCI brackets is required.