The GIGABYTE HD7850 OC's remit was to compete with the GTX570 and for the most part, it completes this task. Throughout our suite of benchmarks the card either toppled the GTX570 or came very close to doing so which is a great result for the diminutive card. It does this while being the coolest card on test along with being one of the most power efficient and for the most part, it was also the quietest. I say the most part because while in 'normal' operation, the cooler was extremely quiet. Even when overclocked the cooler didn't really go much over what can be best described as a murmur. However when the fan was set to 100% it was clear their were issues with the fans. They made a very loud 'rattle' which only subsided when the fans were set below the 70% threshold. While this may not affect most users, especially as the card runs so cool it is unlikely that the fans will need to reach such rpms, it is a design flaw which spoils an otherwise very impressive graphics card. 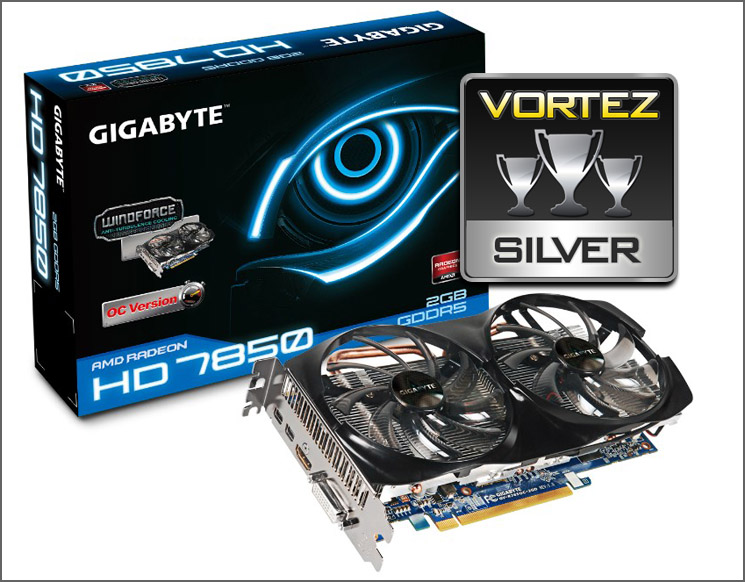 It could be argued that the Windforce cooler is overkill for the Pitcairn Pro core found on the HD7850 and in all honesty I would agree. The 7850 is a cool running card anyway and the only tangible benefit the Windforce cooler has over the reference design is it should be quieter. Again, for the most part this holds true save for the extreme end of the fan speed scale.

Aside from the fan noise, my major concern with the GIGABYTE HD7850 OC is the retail pricing. Costing a little over £215 it is priced about right against the immediate competition. However, to truly dominate the middle market, the price needs to drop below the £200 mark. Yes it is faster than the GTX570 however with recent NVIDIA price drops and AMD's own price cuts on the 7900 range, the GIGABYTE HD7850 OC is left in a precarious position as for a little more you could have the cards more powerful brother, the HD7870. The inflated price can be partially justified because for your money you are getting a custom cooler and a card that comes pre-overclocked but I fear many will opt for the more powerful HD7870 regardless unless the price gap between the two cards is increased.

In short, what you have with the GIGABYTE HD7850 OC is a coo, efficient graphics card and because the fan speed never reaches high levels, it is also quiet. The card was able to hold it's own with cards that are faster on paper so for that GIGABYTE deserve praise. The price however may be the major stumbling block GIGABYTE have to overcome if they are to dominate the middle market discerning consumers who demand power AND value but in all fairness, it is competitive against other manufacturers so while it may not stand head and shoulders above the competition, it is certainly a worthy proposition.

Cons:
- No voltage adjustment
- Noisy fan when above 70%
- Blue PCB may not be to everyone's tastes

Click here for an explanation of our awards at Vortez.net. Thanks to GIGABYTE for providing todays review samples.