The GIGABYTE R9 280X is a great card of that there can be no argument. It coped with almost everything we threw at it with relative ease. Heavily based on yesterdays technology you could be forgiven for dismissing this product however, while ageing, the AMD Tahiti core still has plenty of life left in it if our results are anything to go by.

As expected the Windforce design performed admirably. It kept temperatures under control, allowing for some fair overclocking results, despite already being heavily overclocked at the factory. All the while it was extremely quiet with the fan speed profile set to automatic but should you want to boost the cooling performance, even setting the fan speed to 100% added less noise than you would expect.

Our only real complaint is the blue PCB. It ruins the cards aesthetics in our opinion but on this we are happy to report that a revision 2.0 version rectifies this issue, replacing the blue PCB which a much more discreet and 'theme' compatible Matt black design. The revision 2.0 design also sees the VRMs beefed up which may enhance overclocking. 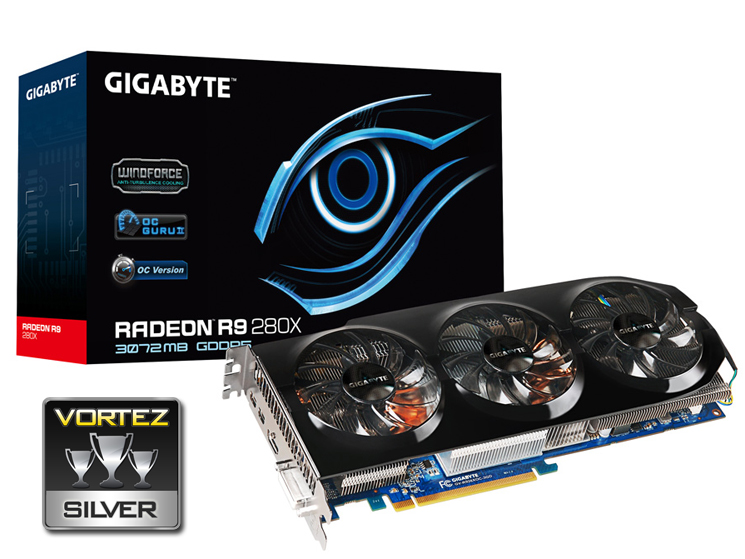 Overall, we were impressed with the GIGABYTE R9-280X. It represents good value for money, performs very well, its cool, quiet and if you ignore the blue PCB it looks great with the super Windforce cooler. Yes we would hope for better overclocking results deserving of such a fine cooling design and other than the title, it can be accused of bringing nothing new to the over populated world of graphics cards but as the old adage goes: 'If it ain't broke, don't fix it.'

To summarise:
Factory overclocked and super cooled, the GIGABYTE R9 280X Windforce 3x OC is a very good graphics card. Under the skin it may be getting on a bit however, it has still has the performance to keep ahead of all but the fastest cards.