👤by David Mitchelson  Comments 📅13-10-21
Conclusion
Weve been treated to a bevvy of high-end cards from RDNA 2 and now its time to see what this tech has to offer for the more discerning budget conscious gamer. Like the XT before it, the RX 6600 is predominately designed for 1080p  the 8GB VRAM operating at 128-bit bus places a slight limitation on going beyond this resolution. Those wanting to dabble in ray-tracing should look to a card higher up in the GPU stack. While RX 6600 can attempt this, it admittedly struggles to produce playable framerates.

RX 6600 is designed to tackle NVIDIAs RTX 3060. The two cards arent that far apart in their performance figures, and youll find in AMD optimised games the RX 6600 will pull ahead. In the majority of the titles we tested, and NVIDIA GPU seems to be more favourable.

While availability/pricing for graphics cards is still unpredictable. The AMD RX 6600 XT has been easier to get hold of and remained significantly cheaper than the RTX 3060, so were hopeful that this non-XT version will settle at around GBP £420 | USD $350 | AUD $650  making it a more appealing option over NVIDIAs solution for 1080p. MSRP set by AMD is US $299 | AUD $550. Pricing will obviously be key. 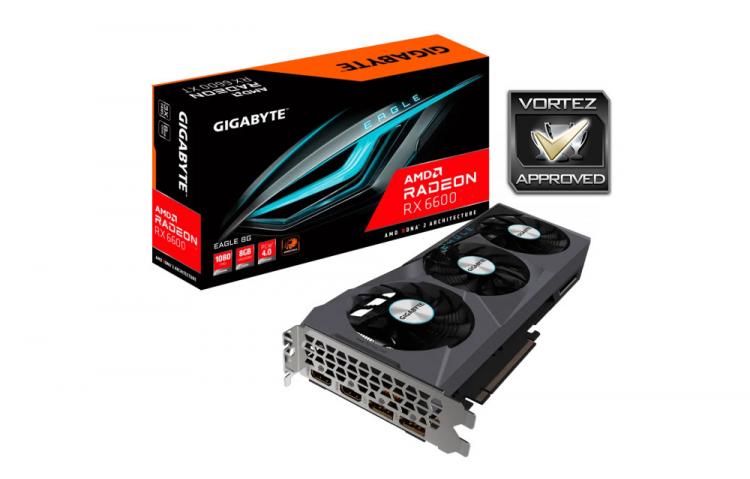 Under GIGABYTEs Eagle livery, were able to keep closer to the MSRP. The card lacks some of the advanced features that may be present on other models but that may not be an issue for some gamers, nor does the omission of a factory overclock. The cooler which Eagle is armed with does a very good job at keeping control of temperature when in-game, but this comes at a cost  the noise levels sky-rocket under their stock fan curve.

Cons
- 128-bit memory bus
- Loud under load
- Design may be somewhat underwhelming
Click here for an explanation of our awards at Vortez.net.

There are currently 780 user(s) online:
Google