On the heels of our first review of a mid-tier X670E motherboard, we bring you a major competitor to just that board at a near identical price point. GIGABYTEs X670E AORUS MASTER is the junior sibling of the X670E AORUS XTREME, a flagship design we looked at earlier in this round of X670E reviews, which aims to capitalise on the excellent base features of the chipset while incorporating the premium features that make most sense in this segment. Its a difficult job, but one that the Taiwanese company absolutely have the skills to accomplish.

AMDs 600-series motherboards launched in Q4 2022 to support the release of their brand new Ryzen 7000-series CPUs. The series introduced a new socket (AM5, their first in the mainstream desktop market to utilise a LGA design), PCIe 5.0 graphics and storage, DDR5 memory, and X670Es startling dual-chipset topology that will handle the copious I/O options possible on the platform. Early adopters of a more cost-conscious persuasion may look at the less well appointed B650 and X670 motherboards, but X670E (itself dubbed X670 Extreme) is for those who would brook few compromises. 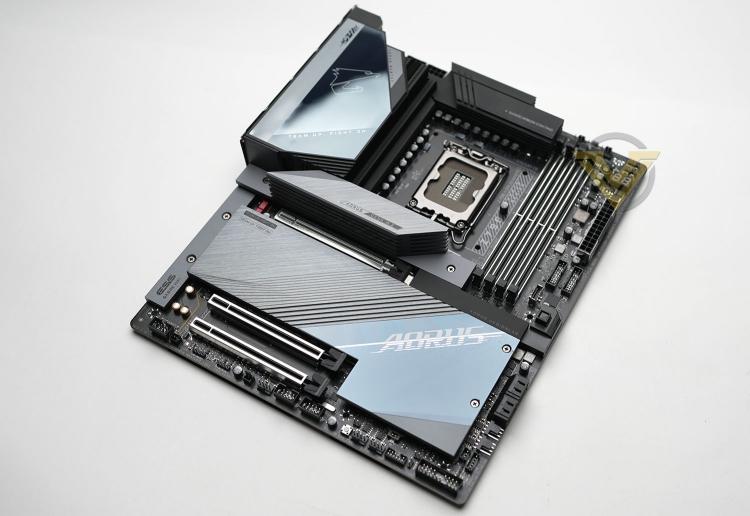 The X670E AORUS MASTER holds fast to the core of X670Es feature set, without quite extending to the capabilities of the X670E AORUS XTREME. WiFi 6E, Dual PCIe 5.0 NVMe M.2 slots, a single PCIe 5.0 x16 slot, one USB 3.2 Gen2x2 port offering bandwidth of up to 20Gbps, 16+2+2 phase power and a supporting round of PCIe 4.0 expansion slots and M.2 storage are all excellent building blocks, but they wont be uncommon amongst the boards competitors. This is where proprietary features come in.

GIGABYTE have taken what they learned in designing the AORUS XTREME and filtered that down into the MASTER where relevant. Features like a reinforced PCIe 5.0 x16 slot to handle heavy RTX 40-series discrete graphics cards, and a similar approach to M.2 and DDR5 DIMM slot design that improves (by large or small amounts) signal integrity and component durability long-term. Or the PCIe EZ Latch Plus system, a technology which means you dont need to fiddle around sensitive on-board components to unlatch the graphics card. Small increments taken individually, but as a totality adding up to more than the sum of its parts. Or so GIGABYTE hope.

The price, however, will for many be the potential buyers true sticking-point. X670E is an expensive chipset which is reflected in the premium being asked of every member of the rang. The X670E AORUS MASTER, like MSIs CARBON WiFi 6E equivalent, is a pricey approx. $500/AUD$830 despite technically being a mid-tier design. Even as the Ryzen 7000-series has fallen in price in recent weeks - the top-end Ryzen 7950 is priced below $550 at the time of writing - X670E motherboards have proved stubborn. The question will be if need all of these features, plus significant overclocking support and thermal performance to match, to make the most out of your future system.

Lets take a closer look at what the X670E AORUS MASTER has to offer.