👤by David Mitchelson  Comments 📅26-11-18
Conclusion
With this seasons Intel Z390 chipset AORUS has completely rebranded their motherboard lineup  uniting their graphics cards. Under their GPU series the XTREME has always represented the pinnacle of what AORUS has to offer and a brief glance at the Z390 XTREME confirms similar traits.

XTREME is unlike any other mainstream solution weve encountered. In almost every section under consideration it pushes the boundaries  maximising on the potential. To this end, XTREME is almost certainly designed for avid overclockers and hardware enthusiasts that seek to take their system to the absolute limit.

With the previous Intel Z370 chipset, motherboard manufacturers were under scrutiny from the press for their VRM cooling configurations. Not wanting to submit to such criticism, AORUS has implemented an extensive VRM cooling system on XTREME which adopts front and backside thermal protection. Such a solution works very well to keep temperatures firmly under control, but there is a cost  weight. Additional heatsinks, copper heatpipes and a backplate all contribute to making XTREME rather heavy. 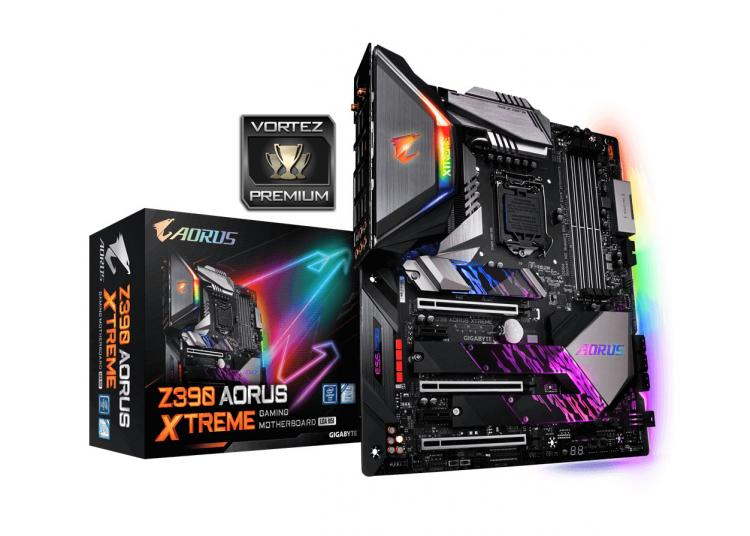 RGB lighting is an area which has taken the industry by storm and whether you love it or hate it, it appears to be here to stay. As such, AORUS has equipped XTREME with plenty of RGB headers for lighting systems but also included an all-encompassing integrated RBG LED system on the heatsinks and between the PCB and backplate. If youre interested in seeing how this looks  be sure to check out our video review.

Features are something which XTREME does not shy away from  especially in departments like storage and cooling. This motherboard arrives with three M.2 NVMe SSD slots which are all PCI Express X4 Gen3 ready  all of which come arrive with respective heatsinks too. Along with an astounding eight fan headers, AORUS bundle the OC Touch Panel and RGB Fan Commander which extends the cooling configuration. This, along with overclocking buttons/switches found on the OC Touch panel make this motherboard an overclockers dream!

As far as performance goes, XTREME performs just as it should  very well. Against other motherboards with the Z390 chipset, this one delivered consistent results and can certainly be relied upon.

The wealth of features that XTREME offers inevitably hits the wallet, costing the princely sum of $550 USD - $899 AUD - £630 GBP. Granted we get a lot for our money  but would enthusiasts be better advised spending their cash on the HEDT?

XTREME by name and XTREME by nature  Z390 AORUS XTREME leaves no stone unturned and delivers up a prolific solution for hardware enthusiasts.