👤by David Mitchelson  Comments 📅10-08-12
Conclusion
Drawing our thoughts to a close then, what is the overall verdict on Z77X-UP5TH?

Well its certainly very similar in performance to its sibling (or even successor) the Z77X-UD5H which likewise offers strong results in a range of different arenas. Overclocking is easy and very fruitful  doing so boosts performance significantly in different areas of usage. Against other rivals the Z77X-UP5TH proved a worthy contender for the Z77 crown.

The differences come with the aesthetics. Whilst the Z77X-UD5H was very pleasing to the eye it was vibrant and quite gaudy but the Z77X-UP5TH is much more subtle. Its difficult to imagine aesthetics getting any better but they do. Z77X-UP5TH is an aesthetic masterpiece, we love it! 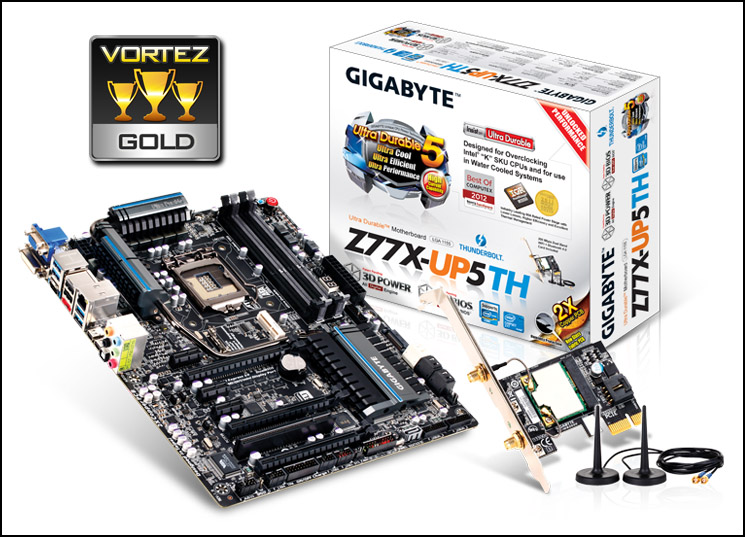 Though Im not a huge fan of the BIOS, using it to overclock was very easy. Z77X-UP5TH managed to reach a 4.7GHz overclock with our Intel Core i5-3570K. This achievement was just short of our best overclock with the Intel Z77 chipset  4.8GHz.

Priced at £250 the Z77X-UP5TH is a costly investment ramping up almost an extra £100 compared to Z77X-UD5H. Compared to its predecessor you get one less gigabit LAN port and absent are the stack of Marvell SATA 3 (6GB/s) ports but instead this motherboard is equipped with dual Thunderbolt ports which may not be mainstream now, but it wont be long before they are, so in this aspect Z77X-UD5TH is a good route to future-proof. Ultra Durable 5 and its strong lineup of features are also included with the UP range of motherboards and understandably this carries with it some of the increase in cost too along with the included WiFi/BT card.

Having used previous versions of GIGABYTEs BIOS and being unhappy with performance its pleasing to see that improvements have been made. Movement and navigation is now fluid and getting the intended task performed is much easier. Im still not a fan of the 3D BIOS though and I would rather GIGABYTE redesign their UEFI (Advanced Mode). Aesthetically this motherboard is very pleasing to the eye, it would be nice to see the BIOS interface correspond to this.

Z77X-UP5TH is an aesthetic masterpiece and a very impressive motherboard. It will satisfy those seeking high-end performance with Intel Z77 and has the added bonus of being future-proofed with dual Thunderbolt ports. The quality is brilliant, the feature-set is extensive and the overclocking is great can you tell why we are impressed?