👤by Richard Weatherstone  Comments 📅24-02-12
Conclusion
Well there you have it. The benchmarks pretty much speak for themselves with the AMD HD7970 leading in all but one game, Batman: Arkham City, itself a TWIMTBP game, heavily optimised for NVIDIA graphics cards. To make matters worse for the GTX580, the lower specced HD7950 also bettered the NVIDIA card consistently so not only is it much slower than the HD7970 it also struggles against the HD7950.

In Battlefield 3, we regularly saw 2GB+ usage at high resolutions with filters applied so it goes without saying, had a 1.5GB GTX580 would have suffered even more. The gap between the two cards was 13FPS at reference clockspeeds a gap which only widened to 20FPS overall when the cards were overclocked - quite significant I'm sure you will agree. This result was echoed in both Crysis games, usually a safe heaven for NVIDIA. Skyrim and Metro 2033 showed closer results but there was still clearly a margin separating the performance of the two card by a minimum 10FPS. While the GTX580 was fast in DiRT3, yet again the AMD card showed it's metal by restoring the 20FPS gap. 3DMark 2011 only served to reinforce the results by again, giving the thumbs up to AMD while Heaven 2.5 showed the superior tessellation performance of the AMD cards.

The R7970 again took the advantage in overclocking. While the two cards cannot be compared for out and out overclocking MHz vs MHz, the R7970 had more headroom allowing greater increases. Both cards however overclocked well giving a significant increase on both memory and core clockspeeds. 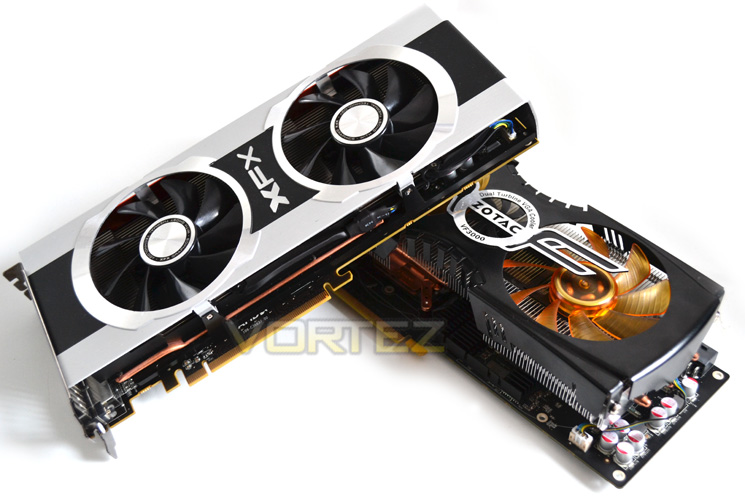 In the power consumption and temperature results, the XFX R7970 pretty much destroyed the ZOTAC GTX580. IT consumed significantly less power and also ran cooler that the NVIDIA card. Both cards do however have custom coolers so in fairness this is perhaps not an accurate description of how each card would perform with reference coolers attached. It is however widely acknowledged that the reference cooler of the AMD is now much improved over the previous design cooling more efficiently and with less noise than before.

There are other areas to consider when choosing which graphics card is best for you of course. [email protected], multiple monitor setups, bitcoin mining to name a few with each card having an advantage in different areas. Today's article however was regarding the raw performance of the two flagship cards.

Overall then, we have shown the HD7970 to be not only the faster card but pound ofr pound a far better proposition than a GTX580. While this isn't so much of a surprise, what is interesting to see is the gap between the two cards. Perhaps most significantly is the fact the GTX580 is also slower than a HD7950 overall! This fact is only compounded when you also consider that the GTX580 we used today was a 3GB edition. It must however be stressed though that we are comparing apples to oranges here as the 7000 series is AMD's latest family of processors while the GTX580, for all intents and purposes, is NVIDIA's older generation. We all wait with baited breathe over the hugely anticipated Kepler range from NVIDIA which if history repeats itself, will see the green team regain the performance crown but for now, after sampling the best both parties have to offer, the undisputed King of graphics cards is the AMD HD7970.

Thanks to XFX and ZOTAC for providing todays review samples.