The specifications of the cards are similar in some areas yet wildly different in others. 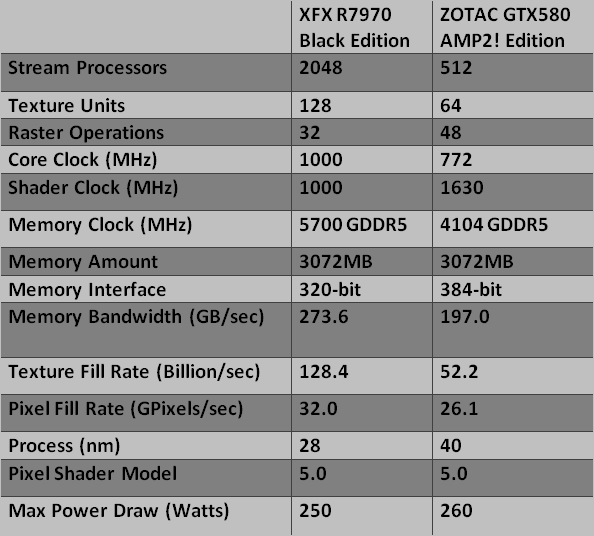 The GTX580 uses the older 40nm manufacturing process while the HD7970 uses 28nm. The R7970 has 4x the amount of processors while the NVIDIA counterpart has 512 (unified). Advantage also goes to the AMD card in texture processing as it has double the texture units allowing the R7970 to draw 128.4 GPixels/s compared to the 52.2 of the Zotac card. The GTX580 however has 25% more ROPs and a larger memory interface however it still lags behind in the memory bandwidth area with 197 GB/s compared to the 128.4 GB/s of the AMD card.

Power draw is fairly similar with the NVIDIA card having a higher TDP by 10W. I would expect the AMD card to draw less power when idle too thanks to the AMD ZeroCore power saving feature. AMD retain the clockspeed crown but as we have seen in the past, clockspeed does not always equate to out right power, especially when comparing one manufacturer to another as AMD had faster clockspeeds in the previous gen but the GF110 was still faster overall.

All things considered, the AMD card looks to have the upper hand in most quadrants but before we move on to the performance of the two cards, lets take a brief look back at each card individually...