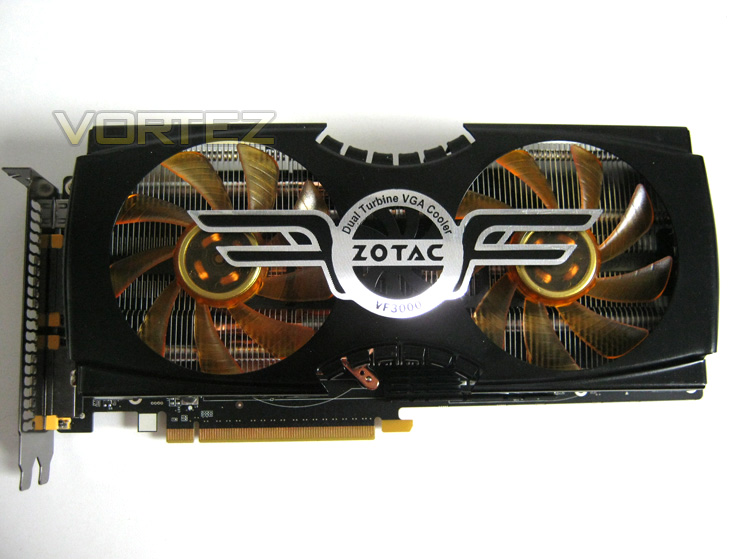 Card Front
The first thing that strikes you when you first see the card is the huge cooler ZOTAC have employed. The card looks like a performance monster with this attached but is only 265MM long. As previously stated though, this beast is 55MM high, taking up three slot spaces on a motherboard. Rather than employing a plastic shroud as with the GTX560 AMP! we reviewed previously, ZOTAC have instead opted for a black aluminium version which is much more sturdy and should last a fair while longer than plastic. The fans are however a little less bright than the ones found on the GTX560 AMP! which is a shame.

Card Rear
The rear of the card reveals the black PCB favoured by ZOTAC. There is no backplate fitted to the card to protect the delicate components or to help disipate the heat of the VRM circuitry. One point worthy of note are the four spring loaded screws which attach the card to the heatsink. These screws stand proud of the backplane by 4mm which is a significant amount should you wish to place two of these cards directly together. 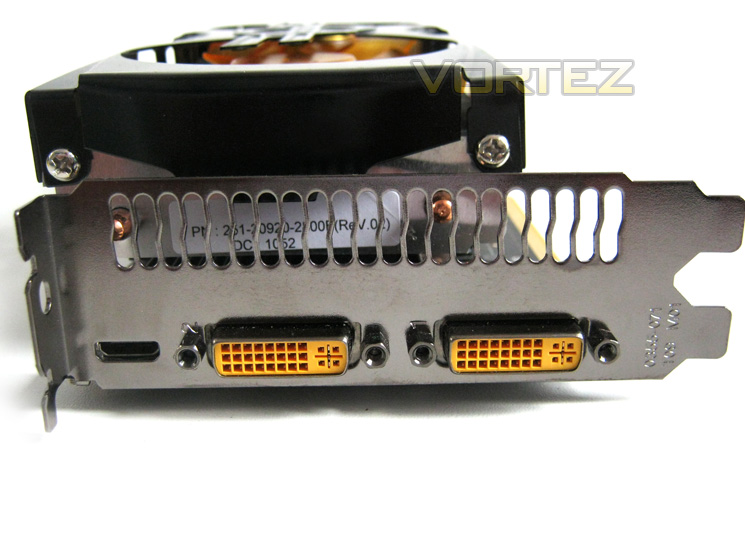 I/O Area
The I/O area is par forthe course and much the same as a reference GTX580 save for the colour co-ordinated DVI twin ports which support a maximum resolution of 2560x1600. Adjacent to the DVI ports is a single HDMI port sporting the latest 1.4a standard. It is worth mentioning that the ports support NVIDIA Surround Technology without requiring DisplayPort as the card is used in SLI configuration. 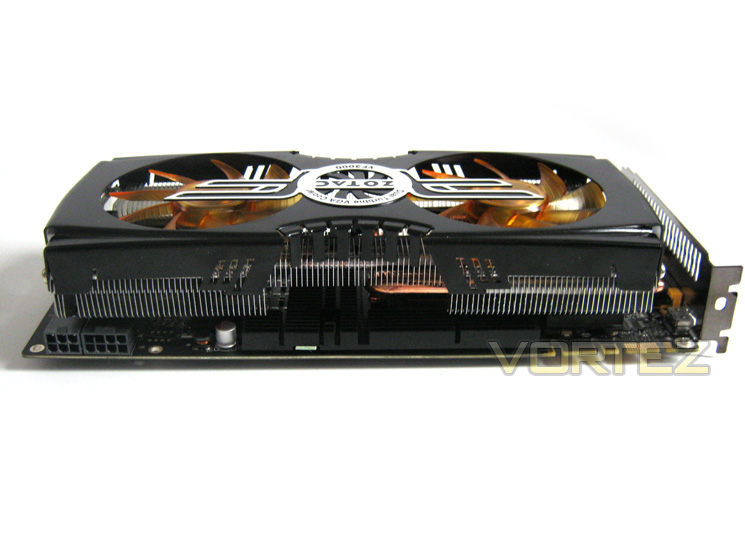 Card Profile
Here you can see the card from a side view. The main cooler stands proud of the I/O plate by a further 17mm and while the I/O plate is vented, an hot air will be exhausted directly into the case as you can see which means you will need good case fan orientation to get the very best from this cooling design. 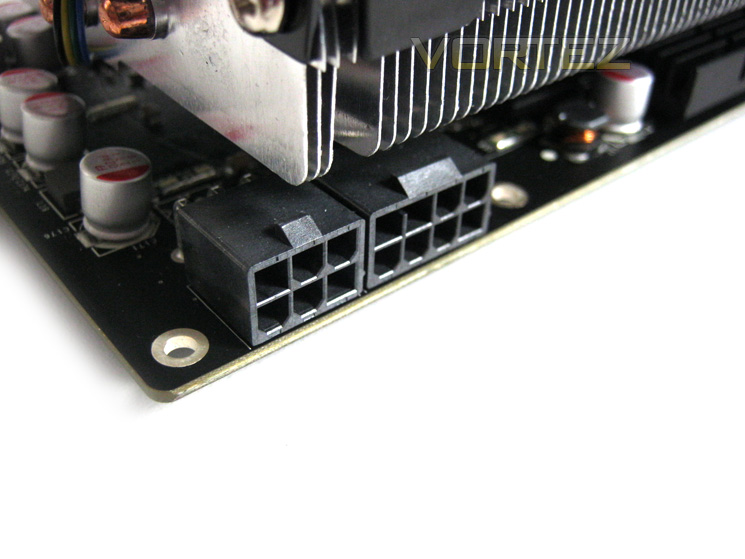 PCIe Power
Like all GTX580's, the ZOTAC GTX580 3GB AMP2! requires both 8pin and 6pin PCIe power cables used in tandem. These ports are placed toward the rear end of the card but still situated on the side so will not interfere with other pc components such as hard drives. Unfortunately, out samples did not equip the package with an 6pin adapter so you will need to ensure your PSU has one of these connectors spare to power the card along with an 8pin adapater (included). ZOTAC recommend a 600w PSU as a minimum to power the GPU which in our view should be more than enough if you intend to run the card in single card configuration. 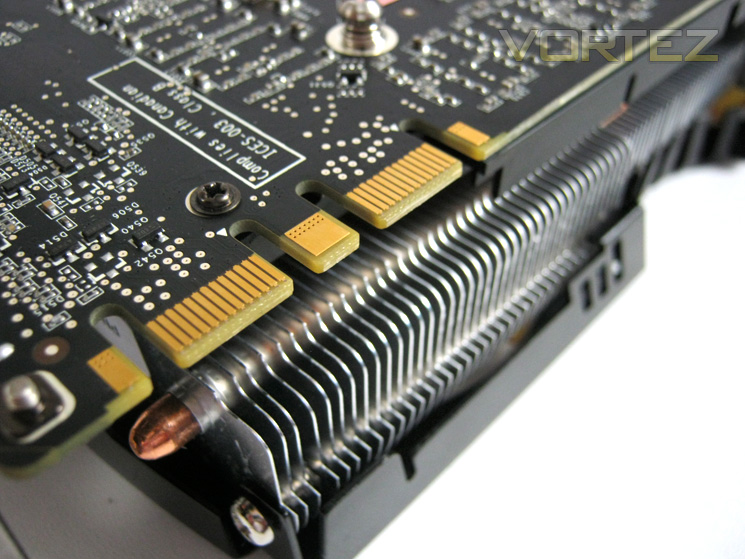 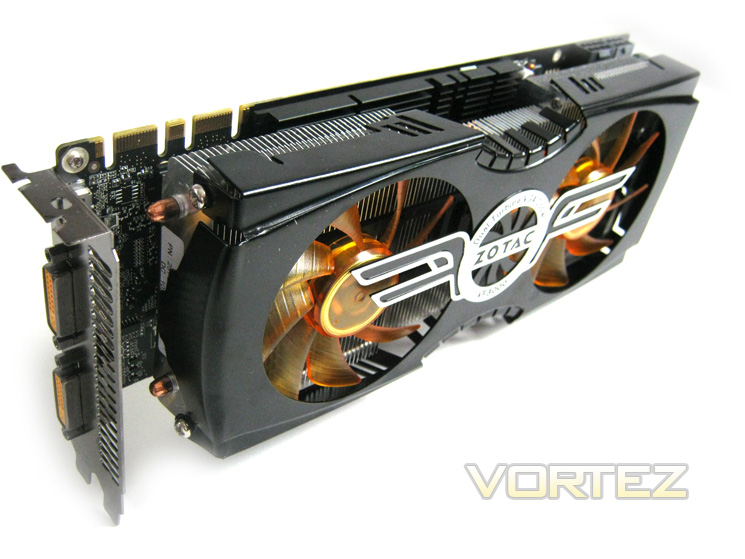 ZOTAC GTX580 3GB AMP2!
Overall, the ZOTAC GTX580 3GB AMP2! is a stunning looking peice of kit. The packaging is very good and should ensure your card arrives in A1 condition. I would have liked to see anti-static packaging used but this would perhaps ruin the point of the window but in all honesty, what use is the graphics card looking pretty if it doesn't arrive in working order? That said, the packaging is substantial enough that there should be no physical damage and you take adequate precautions before handling the card.