When the boss asked me to review the HIS HD6970 2GB IceQ Mix I will be honest in that I groaned a little as I initially believed this to be a re-hash of the previous model we reviewed: The Overclocked Turbo edition of the HIS HD6970 2GB here. After a raised eyebrow and a slap around the head he said no, this is something quite different, this is the 'Mix' edition featuring an on-board Lucid chip. Now I was well aware that Lucid had dabbled with on-board motherboard chipset Northbridge chipset additions to allow cross platform gaming but this is the first I had heard of a VGA which could do the same thing. Never one to shy away from new technology I happily took the HIS card under my arm and went back to my 'man-cave'.

So what makes this card different then? To put things bluntly, the main attraction of this particular variant of the IceQ family is that this HIS video graphics adapter can be paired with another graphics card. Whats so special about that I hear you ask? Well, up until now, we enthusiasts have had to utilise SLI or Crossfire to pair our GPUs and even then we were restricted to using cards from the same base manufacturer, NVIDIA or AMD. The difference with the HIS HD6970 2GB Mix is that you can you crossfire the card with another AMD GPU from the same family as per normal Crossfire specifications but (and here's where it gets interesting), you can also Mix it up with an equivalent card from NVIDIA! 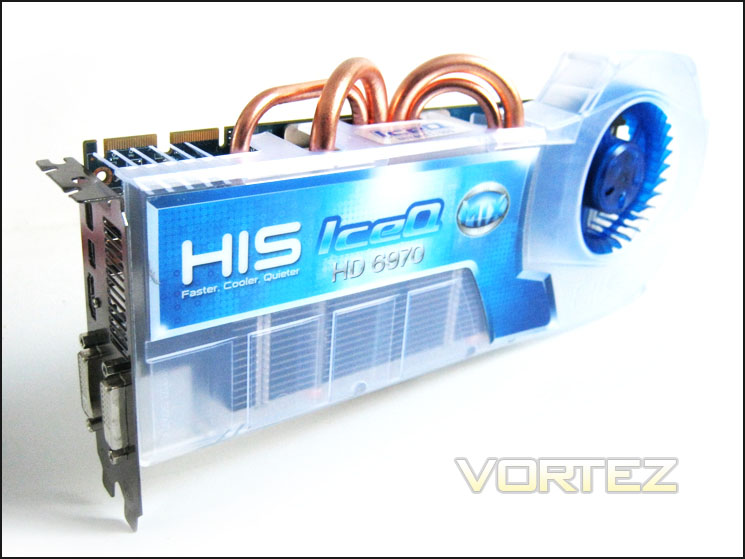 Up until now, the LucidLogix Hydra 200 chip has only been utilised on motherboards, first seen with the MSI P55 Big Bang motherboard back in 2009. So while the concept is nothing new, HIS have now utilised the chip by installing it onto the HD6970 PCB design. I won't go to far into the technology behind the HydraLogix just yet but suffice to say, the small power requirement of the chip should mean that no additional cooling will be required and while the card will still feature crossfire capabilities via AMDs Catalyst software, the on-board HydraLogix engine should also give the card a very flexible future.

It remains to be seen however if the HydraLogix driver can deliver performance on a par with AMD and NVIDIA as historically, Lucid has had to play third fiddle to the big two. So while Lucid can offer the flexibility of cross platform, multi-gpu gaming, more often than not performance has been lacking which has deterred the gaming community from taking advantage of Lucids flexibility. In todays review, we will be testing the card on its own using the latest catalyst software but perhaps more importantly, we will pair it up with an NVIDIA GTX580 for some cross-platform shenanigans. We will endeavour to compare HydraLogix drivers against NVIDIA and AMD for multi-GPU cards of the same manufacturer in the future but I feel the most important aspect of the card on test today is it's capability of cross-platform multi GPU performance.

Is it possible? Does it work? How does it perform? These are the questions I posed myself when testing the HIS HD6970 2GB IceQ Mix which I will endeavour to answer throughout the review. It's certainly an interesting proposition to be able to mix GPUs both from different manufacturers but also from different generations. If the technology does indeed do 'what it says on the tin', Lucid and HIS may well have a winner on their hands as enthusiasts worldwide will be falling over themselves to grab some extra performance from a redundant GPU. Even if the technology is not quite mature, HIS have chosen a platform in the guise of the HD6970 which should still form a solid foundation for any gaming pc.