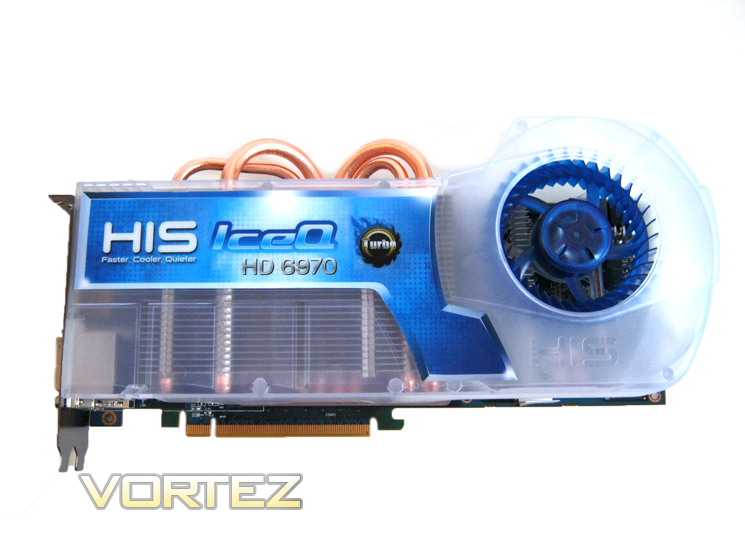 The first thing that strikes you when you first see the card is the mammoth IceQ custom cooler. Hidden beneath the opaque shroud is the main aluminium finned heatsink skewered by four copper heatipies. Following on from the ice themed packaged, the gloss sticker on top of the cooler was well lined up with the heatsink with no signs of peeling. Aside from the sheer size of the cooler, perhaps the most striking aspect of the card was the blue fan, houses traditionally towards the end of the card. 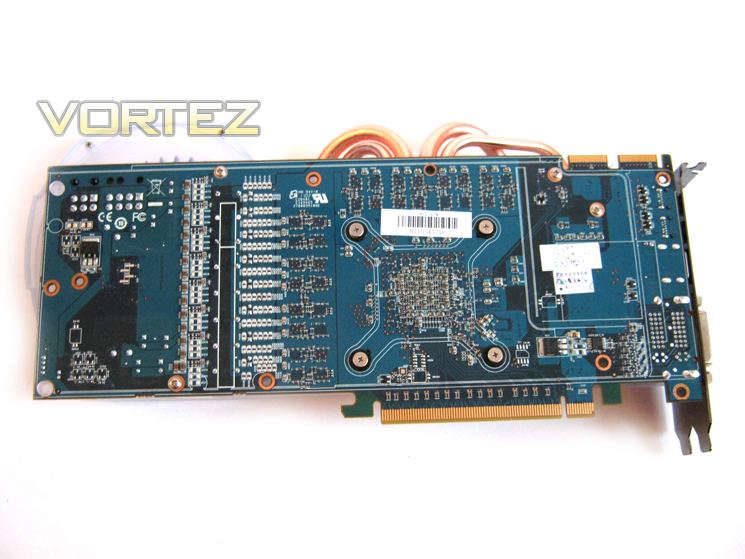 Flipping the card over we see that HIS have used a blue power circuit board to match the colour scheme of the card which enhances the overall aesthetics. While all of those bare transistors on display may hint at the power of the graphics cards, they are susceptible to damage and because of this I tend to prefer graphics cards with a protective backplate. Sadly, the HIS HD6970 IceQ Turbo does not have such a luxury which is a shame given the thought that has gone in to designing the card. 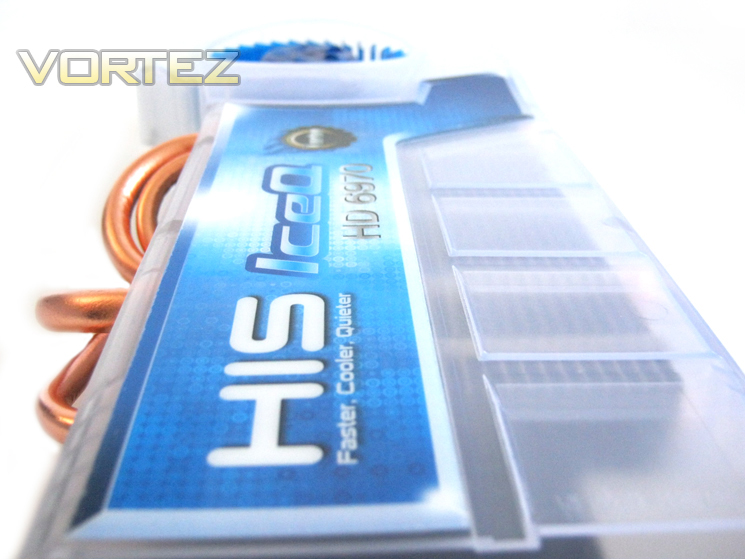 Back to the cooler, as you can see above, the unit is very attractive and covers the full length of the card. I most stress however that while the plastic shroud covers the majority of the aluminium heatsink, it is not a sealed unit and therefore has the potential to vent some of the exhausted air back into the case. 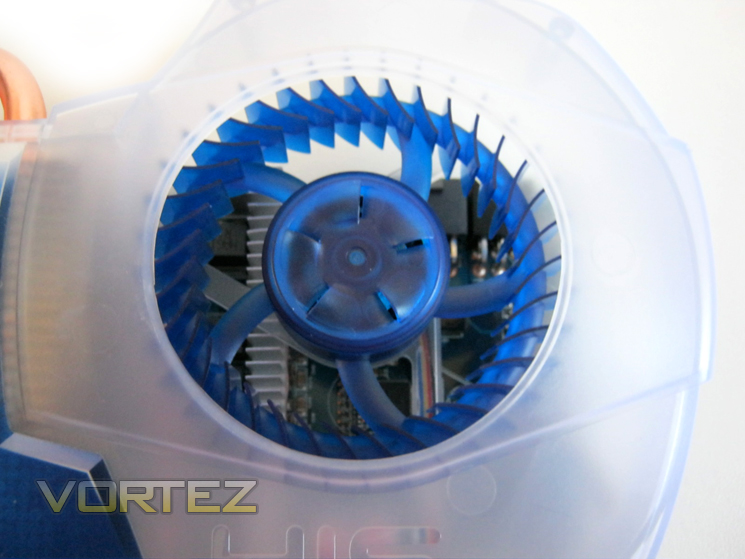 The large blue impeller appears at first glance to be similar to both ATI and NVidia reference fans but HIS are keen to state that their fan features 'Black Hole' technology. This design allows the fan blades to draw air from both sides of the fan making for a more efficient cooling solution. The air is then channelled through the heatsink towards the backplate vents and exhausted at the rear of the card. 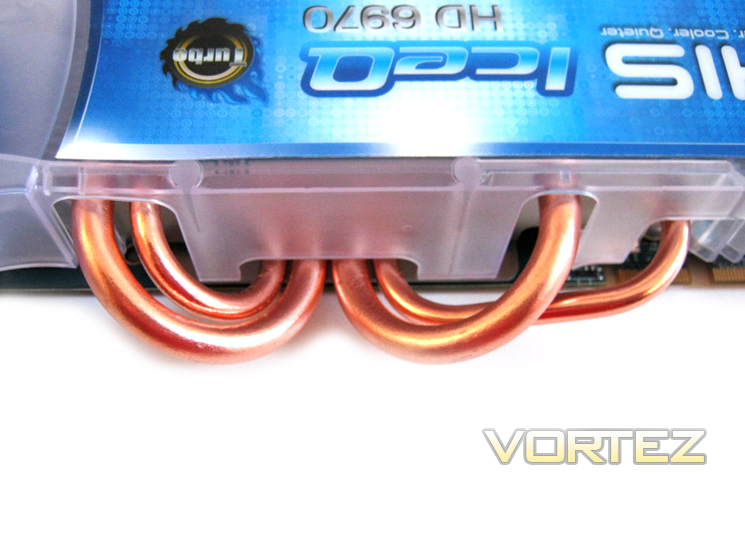 The GPU heatsink is aided by the use of four copper heatpipes in a 2x 6mm and 2 x 8mm configuration. The heatpipes work by drawing heat directly from the GPU core and spreading the heat along the heatsink surface. This makes for a dramatic increase in cooling efficiency and ensures the core is kept under the coolest, most efficient operating conditions throughout its usage. 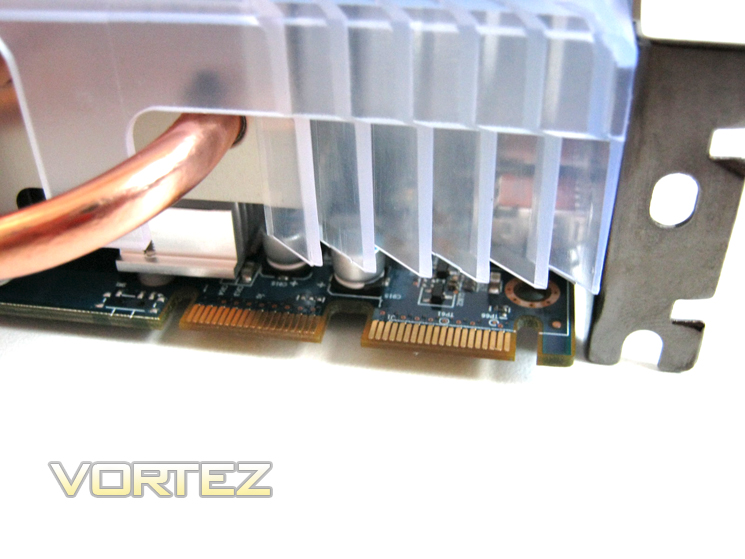 Hidden beneath the finned shroud we find not one but two CrossFire connectors allowing the HD6970 to be used in CrossfireX configuration. Unfortunately because of the sheer size of the GPU cooler adding more than one card to the setup will be extremely difficult as the cards depth almost fills 3 PCI slots! So unless you have a high end motherboard with well spaced out PCIe ports, it is unlikely you will make use of the additional CrossFire tab. 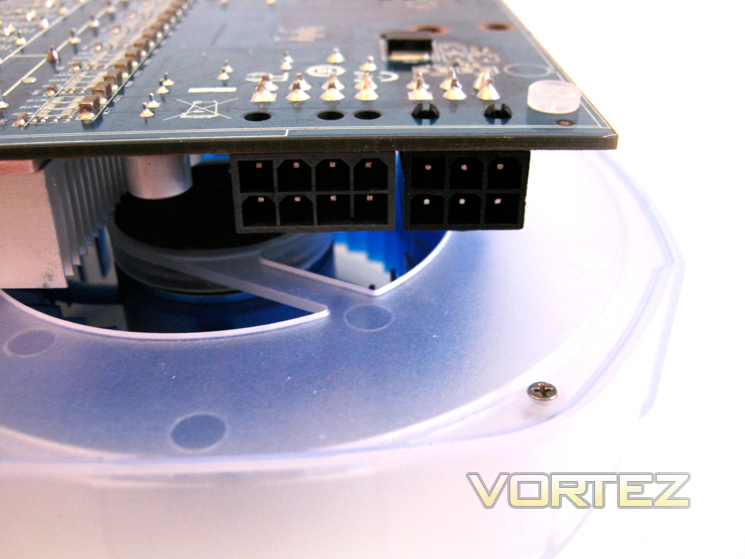 As you can see from the picture above, the cards cooler overhands the PCB by a fair amount (2.9cm) and because the PCIe power ports are below this overhang, adding the cable width and the cooler overhang together (apx 15cm depending on cable type) may present some fitment issues to those with a case that is not very wide.
The card requires 250W maximum to operate under the highest stress so with this in mind HIS have recommended a PSU of at least a 550w power rating. This power will be delivered by the PCIe port along with both 8pin and 6pin PCIe power connectors. Thankfully the included MOLEX adapters should ensure this is possible even if your PSU does not have the available PCIe plugs as standard. 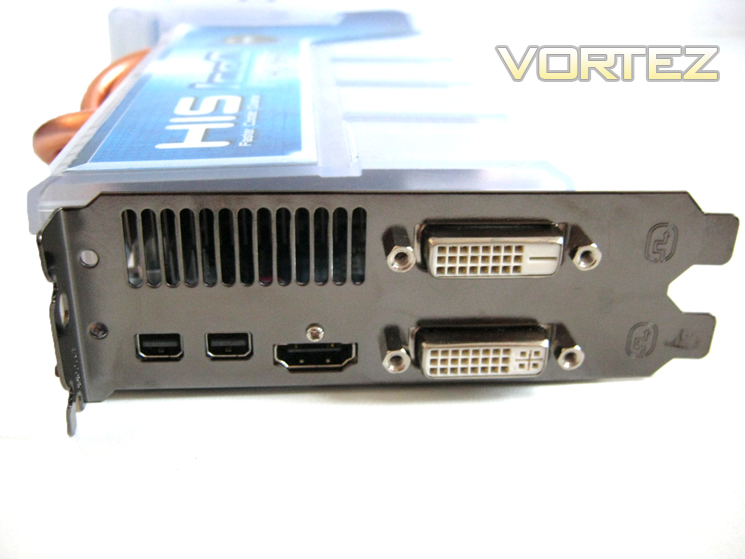 The I/O backplate features a varied selection of connections. To the right there are two Dual Link DVI-I ports capable of displaying up to 2560x1600 on a single display. As stated on the packaging, the HD6970 is also capable of utilising up to 6 displays taking advantage of AMDs Eyefinty multi-display technology. Moving slightly to the left we see the single HDMI 1.4a socket coupled with two mini display ports sporting the latest 1.2 standard. Finally we see that there is a vent allowing hot air to be expelled from the rear of the GPU.