AMD are no stranger to dual GPU single graphics card. Some could say they even pioneered the idea prior to the concept becoming more mainstream after Nvidias attempt. Some might remember ATIs Rage Fury Maxx which held two Rage 128 Pro chips. Although CrossFire did not exist back then, they worked in an Alternate Frame Rendering configuration, similar to modern day implementation of SLI and CrossFire. The concept was not successful due to the lack of dual GPU support on Windows and AGP, but recent times has shown the efficiency that could be achieved under new Windows environment and thanks to new PCIe standards. It was in the RV670 era that AMD decided to adopt the dual GPU idea. After failing to create a card that could compete with Nvidias offering at the high end, they decided to package two of their more mainstream offerings onto a single card to attain performance enthusiasts sought. The idea was soon adopted and paved AMDs future line up of cards. Their road maps revealed that they would focus on smaller, highly efficient GPUs that would target the £300 price point and lower, and to please the niche enthusiast market, they would simply have one card holding two such GPUs via CrossFire. It was a promising concept and one that has transferred well into the market. The HD4870x2 and HD5970 proved highly successful and easily outperformed Nvidias monolithic designs at similar price points. Today we will look at AMDs successor to the HD5970. Codenamed Antilles, the HD6990 packs two Cayman based HD6970 GPUs on one card and if recent improvement in CrossFire scaling are anything to go by, the HD6990 will challenge Nvidias GTX590 very closely indeed.

Both Nvidia and AMD have settled on very similar design cues for their dual GPU cards. Both have taken their most powerful GPU, GF110 and Cayman respectively, and placed them onto a single PCB. To lower power draw given their GPUs incredible hunger for power, both companies have decided to lower the respective clock speeds but still making sure the architecture was not compromised. As such, the individual cores aboard the HD6990 still boast an impressive 1536 shader count, 96 stream processors, 32 ROPs and 256-bit memory bus. In doing so, the clock speed had to be reduced to 830MHz on the core and 5GHz on the memory to meet the already out of specification 375W TDP. It effectively means that the HD6990 is two HD6970 with slightly lowered clocked. Comparatively, the HD5970 suffered a greater clock speed deficit from its HD5870 derivative making the card more in line with CrossFire HD5850 performance. The HD6990 should hopefully be closer to HD6970 CrossFire performance than dual HD6950 performance. Furthermore, AMD have lowered the voltage at which the GPUs operate to ensure that the card fits within the 375W envelope. The reduction in clock speed is more conservative than Nvidias attempt so despite the GTX590 sporting two more powerful GPUs, this hefty sacrifice may well allow the AMD to take the crown.

Antilles inevitable still follows the VLIW4 architecture Cayman is based on so users can expect to see Morphological AA, and enhanced tessellation performance. Like the previously reviewed ASUS HD6990, the card we are reviewing courtesy of HIS follows the reference AMD design with no tinkering done to the clock speeds or PCB arrangement. 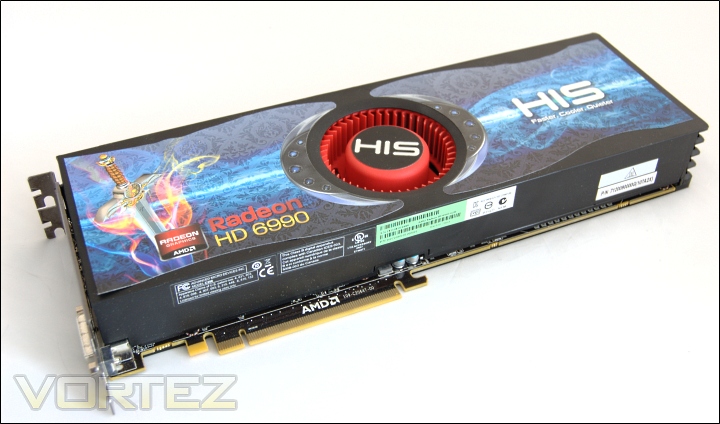 Lets see what HIS and AMD have to offer with their card.