Cooler and quieter are how HIS describe the HD 7870 IceQ Turbo when compared to the reference design. They did however miss out on the biggest attraction - faster! While it is hardly a slouch at stock clockspeed thanks to the 100MHz factory overclock to the core, Turbo just doesn't cut it when you consider that this card, when manually overclocked to the maximum speeds possible, traded blows with the much more powerful HD 7950 and almost toppled the mighty HD7970. It did this by being both cooler and quieter. It should be stated that there have been driver enhancements since we reviewed the HD7950 but for all intents and purposes, the HIS HD7870 IceQ Turbo would be punching above its weight even without a driver revision.

The HD7870's we have reviewed thus far have impressed us but all have suffered at the hands of AMD's pricing strategy. The same criticism could be handed to the HIS HD7870 IceQ Turbo too in that it is the most expensive HD7870 based graphics card we have reviewed so far, weighing in just below the £300 mark (estimated). Therefore the same argument persists: For a little more you could buy a reference HD7950! The manually overclocked HD7870 IceQ Turbo may well perform better than a reference HD7950 but when both cards are overclocked, the HD7950 is the faster card. It will however be noisier, hotter and consume more power so the decision is not as straightforward as you would think. 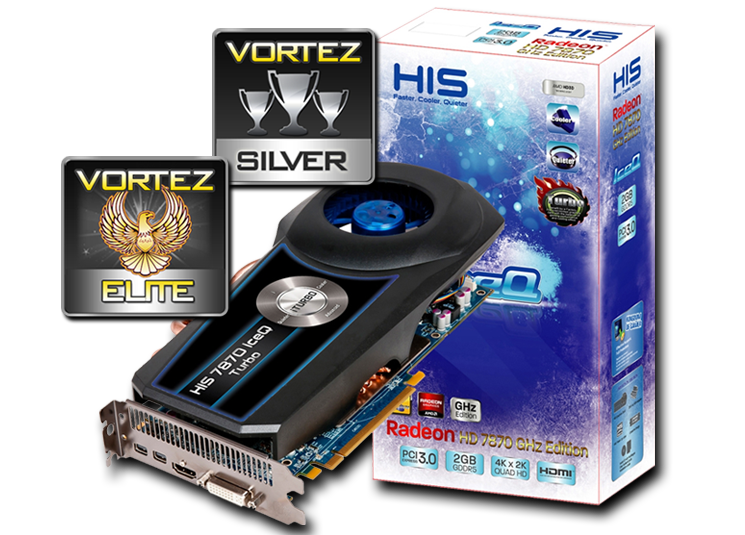 When all is said and done though, the HIS HD7870 is the fastest card of the Pitcairn family we have tested to date and so clearly deserves our Elite award. I struggled long and hard over what 'medal' to give the GPU. I could easily dismiss the HIS as a Gold winner and to be truthful, I almost did as it really is that good. Were the card not priced so close to the HD7950, Gold is the award that the card would receive and deservedly so as it performs extremely well in all areas bar one - the price. It therefore, like the other HD7870's, has to settle for Silver, albeit a very shiny, highly polished silver!

Click here for an explanation of our awards at Vortez.net. Thanks to HIS for providing todays review sample.