The HD7970 has had a mixed reception from the enthusiast community. On the one hand, many are not impressed with the AMD HD7970 with most disappointed at the high retail price. For £100 less someone could buy NVIDIA's GTX580. While the GTX580 doesn't have the same performance it is hardly a slouch. On the other hand others are happy to see that the HD7970 has taken back the performance crown and given NVIDIA food for thought. Either way, there can be no doubting the HD7970's performance and performance three fold: speed, power consumption and cooling. AMD it seems, have got the balance just right save for the price. So if it is not broken, why change it? That seems to be the philosphy behind the HIS version of the HD7970 as on the face of it at least, it is identical in terms of both aesthetics and cooling by using the same heatsink/cooling design as the vanilla HD7970/7950. 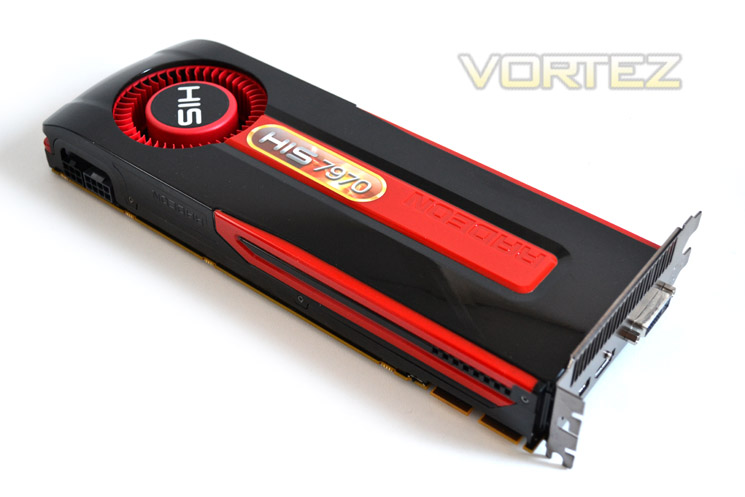 HIS are renown for implementing some very distinctive, inovative coolers. Take for example their IceQ range. Excellent cooling ability it may have but the design was not to everyone's tastes. So then, in this example at least, HIS have decided to go with the stock AMD cooler with little more than a sticker to identify the brand. Many manufacturers take this approach so HIS cannot be criticised for using the reference design and as we have seen, the AMD cooler is much improved so it makes sense, especially this early in the production line. No doubt we will see HIS implement their own cooling design and perhaps a customised PCB later in the year but for now, the HIS card we have for review today is a reference design.