👤by Sahil Mannick  Comments 📅27-03-11
Specifications
The GF104 chip was originally designed from the ground up to target the mainstream market and it came in the form of the GTX460 in two SKUs sporting different framebuffers. However, it was still based on the same Fermi architecture as its bigger brother, the GF100 and following in its footstep it came with one functional unit disabled. The GTX560 gets the same treatment the GTX580 cards have received and features an updated/tweaked version of the GF104 chip. The most significant change is that the last of the 8 stream multiprocessors (SM) is now functional, enabling an additional 48 CUDA cores over the 332 on the GTX460 for a total of 384 Cores. This alone should give the GTX560 a boost in performance. The GF114 GPU, as it has aptly been named, still boasts the same transistor count of 1.95 billion and uses the same 40nm manufacturing process. The latter highlights the fact that Nvidia have engineered the chip to be more efficient on a more mature process without resorting to a small manufacturing process. Architecturally, the layout of the core has remained unchanged. Each of the 8 SMs has a polymorph engine and every 4 SM shares a raster engine. Unlike the GF110 core, each SM has 48 CUDA cores instead of 32 and each has 8 texture units rather than 4. The implication of this is that each SM of the new core has more compute and texture power than the original GF100/110 GPU. The result is a core organised in an 8x48 block to give a total of 384 CUDA cores. Additionally, there's the L1 Cache for each SM and a common L2 Cache shared the by the core's 8 SMs.

The memory subsystem is also intact. The core has 4 memory controllers for a 256-bit memory interface. The GTX560 makes full use of them for 1024MB of on-board memory. To compensate for the narrower memory bus, Nvidia have teamed the core with GDDR5 memory for much higher bandwidth that could previously be achieved using the same bus width.

Other benefits that have made their way onto the GTX560 are less leaky transistors and as a result, much higher default clock speeds. Whereas the GTX460 came clocked at 675/3600MHz, the GTX560 is clocked at 822/4000MHz. The result is a card that is substantially more powerful than its predecessor with only a mere 10W rise in maximum TDP. 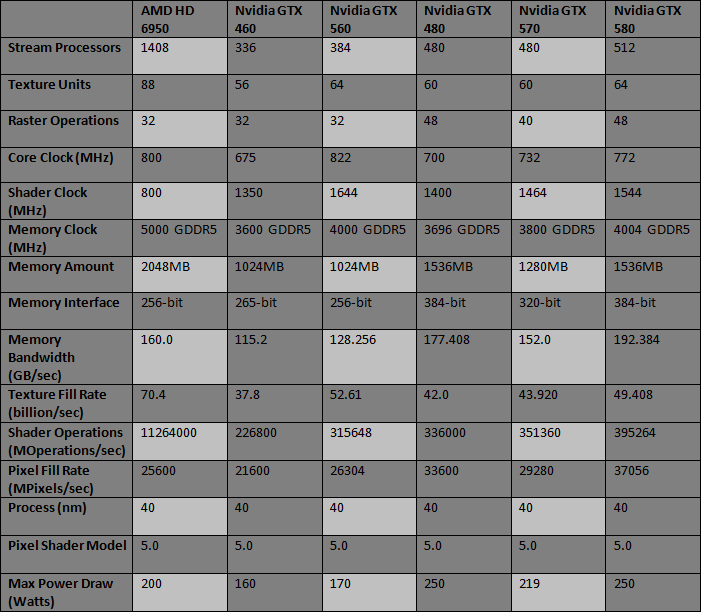 The GTX560 claims nearly 40% better texture fill rate and shader operations over the GTX460, and memory bandwidth has been boosted by 11.3% thanks to the higher memory clock speed. The pixel fill rate also shows gains of around 22% which is nothing to scorn at. Compared to its closest rival from AMD pricewise, it does not look favourable but thats the downside on performance numbers on paper. Actual performance will no doubt be different.

3D API: Direct X 11 & OpenGL 4.1
DVI Output: 2
HDMI: 1
VGA: Supported using DVI-to-VGA adapter
Display Output (Max Resolution): 2560 x 1600
HDCP Support: Yes
Dual Link DV1: Yes
HDMI Support: Yes
SLI/3-Way SLI support: Yes
Card Dimension (mm): 225 x 115mm
A substantial overclock has been applied on the Inno3D GTX560 straight out of the box, representing a 16% overclock on the core and 7.5% on the memory. It is probably one of the highest clocked standard reference cards, if not one of the highest clocked GTX560 regardless of design.