For six years - from January 2011 until February 2017 - Intel largely dominated the Desktop PC marketplace. Riding high with smash release after smash release starting with the 32nm Sandy Bridge era, even the debut of Ryzen couldnt entirely take the wind out of their sails. The architectural heart of the Sandy Bridge era beat strongly as they transitioned to 14nm and Skylake, followed by Kaby Lake, and eventually 10th Generation Core Comet Lake CPUs in April 2020. By this point however the game had changed.

AMDs Ryzen CPU platform launched in 2017 and quickly garnered a reputation for high performance multi-core processing, pushing core counts up to eight on a single die intended for conventional desktop systems. But Intel maintained a mature 14nm process, increasing clock speeds while maintaining higher Instructions per Clock over the competitors. Coffee Lake introduced higher core counts for mainstream desktop processors - up to 8 Cores and 16 threads to match the Ryzen flagship of the time; Intels lead was slipping, but still secure in core markets.

Ryzen 3000-series CPUs debuted the Zen 2 architecture and chiplet design, and once again extended AMDs core count lead. Intels IPC and clock speed advantage remained as they pushed to a 10-core model, but they languished on 14nm even as AMD were working with a mature 7nm process. And then, late last year, the bomb was dropped - Zen 3, and the Ryzen 5000-series.

Suddenly the IPC advantage, once seemingly insurmountable, had closed to appear almost negligible. The TDP advantage had long since passed, on paper at least. Only a 5GHz+ single-core Max Turbo frequency advantage remained, and even that was debated as applications began to leverage multiple cores. 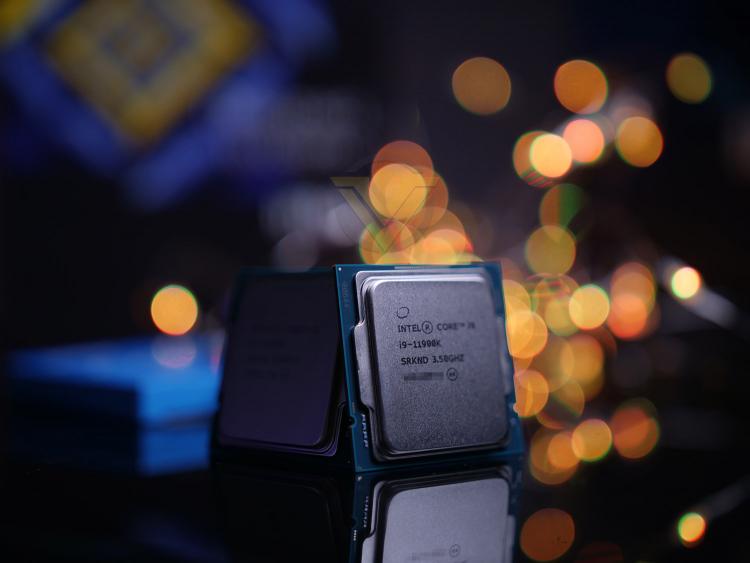 Embattled. Doubted. Ridiculed by some. Today may be the day that Intel begin their fightback in earnest as they launch the 11th Generation Core family of desktop CPUs. Codenamed Rocket Lake-S, a future-looking processor that incorporates technologies developed for cutting-edge 10nm Ice Lake mobile processors. A top to bottom processor stack update for the Desktop PC platform claims PCIe 4.0, higher IPC, higher and improved Turbo Frequency characteristics and a more powerful GPU, all while maintaining both the 14nm manufacturing process and LGA1200 socket.

The chips have been afforded a staggered unveiling, first at CES 2021 where the flagship Core i9-11900K was presented to the world and then an event two weeks ago that introduced the rest of the range. Today were reviewing that same flagship 11th Gen Core i9-11900K and the mid-range i5-11600K, both of which are unlocked and both of which are looking to take the fight to AMD Ryzen on grounds of performance, features and price.

Meanwhile, the Core i5-11600K is a 6-core/12-thread chip with a list price of $262, making it appear remarkably well positioned against the 6-core/12-thread $299 Ryzen 5 5600X. In this dramatic reversal of fortunes Intel, as the apparent underdog, is appears to have compelling budget alternatives to the segment leader AMD. But will performance validate their assumptions?

Joining the 11th Generation launch is the release of motherboards based on the Z590 chipset. Previous Z490 motherboards may be forwards-compatible with the new processor designs for slot-in upgrades (if desired) and PCIe 4.0 support, but new builds will surely want the fully validated and more advanced chipset.

So, stop-gap substitute to keep the wolf from the door, or new predator keep to gobble-up market share prior to a radical 12th Gen. platform shake-up? Its time to find out.