This revised architecture boasts double-digit percentage performance improvements over the previous generation through a broad increase in Instructions per Clock, with figures between 10 and 20% often quoted.

Rocket Lake-S is the debut of Intels new Xe graphics architecture on Desktop platform. Scalable, such that similar principles can be utilised in on-board implementations or discrete graphics, its an evolutionary leap over 10th Gen. graphics. Intel UHD Graphics 750 are configured with 32 Execution Units (256 Shaders) operating from 1.2-1.3 GHz; Intel Iris variants may be equipped with more execution units.

The implementation of Intel Xe graphics contributes significantly to performance improvements in workloads that can better leverage the parallel processing capabilities of a GPU architecture. Video Encoding, Machine Learning and photo creation are all use cases that contribute towards an up to 50% improvement in graphics performance compared to the 10th Gen. 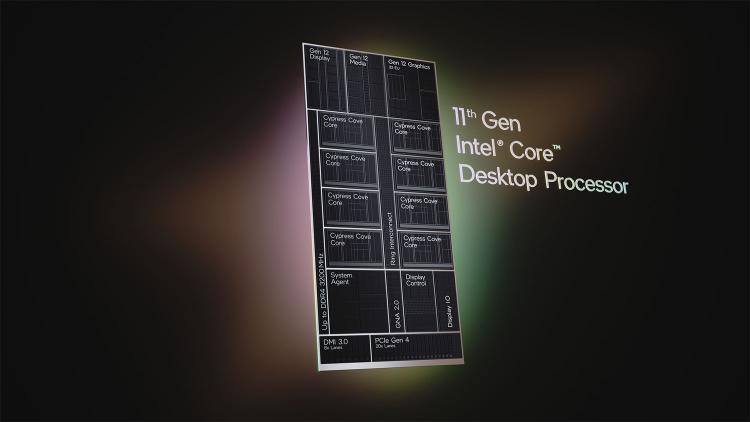 Intel finally supports PCIe 4.0, allowing the attachment of compatible GPUs and NVMe SSDs at near twice the bandwidth of PCIe 3.0. Rocket Lake on the desktop also supports the Resizeable Bar optional feature of PCI Express, allowing the CPU to address the entirety of discrete GPU memory through the PCI Express bus rather than smaller sections of limited size. Resizeable Bar support is already available on NVIDIAs GeForce RTX 3060 GPUs, and should be rolled out to other members of the RTX 30-series in the near future with a vBIOS update.

Over previous generations Intel created a series of automatic mechanisms which temporarily boosted the operating frequency of one or more cores beyond its base clock. The 11th generation institutes a new dynamic overclocking mode, discretely defined rather than wrapped up in a wider package of tools.

Intel Turbo Boost v2.0 (v1.0 was withdrawn with the Sandy Bridge architecture in 2011) holds the CPU at its base clock when processing lighter workloads, then shifts to a higher clock speed when a more heavy workload is encountered. It now operates across all cores, and the duration of the boost is largely workload and time dependent, and this form of Turbo Boost is successfully used to reduce long-term power consumption.

Intel Turbo Boost Max Technology 3.0 dynamically allocates workloads to the cores its most suited to, and further pushes the operating frequency of those selected cores if there is headroom to do so. The limits are more flexible and dependent on workload and thermal headroom.

Currently exclusive to Intels Core i9-11900K(F) series processors, Thermal Velocity Boost is a new adaptive opportunistic overclocking scheme which dynamically manages operating frequencies based on power budget and temperature below a pre-defined maximum. It operates across all cores, and the level of boost will be determined by the workload, time spent on the workload, silicon capability and cooling solution.

Intel continues to feed small overclocking tweaks into products that attract enthusiasts, where possible aiding them in their quest to squeeze every crumb of performance from the platform. The 11th Gen is no different.

Part of this is the Gearing system of memory ratios, but thats also augmented by support for wider timings to improve overall stability during tests on the limits. Joining them is a real-time memory frequency modifier, which allows overclockers to boot with on memory configuration, switch it for an overclocking pass, and then step back down once testing has concluded. A Gear change typically will require a system reset, whereas Intel are providing tools to nonetheless manipulate memory frequencies with greater flexibility.

Joining that call for greater flexibility the unlocking of memory overclocking on H570 and B560 Chipsets. Its not quite the full-fledged overclocking we enjoy on AMDs mainstream B-Series platform - Intels dual-clock K-SKU CPU plus Z-SKU motherboard restriction effectively remains in place - but it should allow a little more headroom to eek out performance from mainstream systems.

Finally, Intel have also enabled the option to modify AVX2 and AVX-512 frequency offsets and the Voltage Guard-Band Override. AVX workloads in particular can be a significant contributor to the overall CPU workload; by reducing the frequency at which AVX instructions are processed it can allow more thermal headroom for the CPU as a whole. Alternatively, there is also a option to enabled or disable AVX alternate instructions entirely, reverting to standard x86 codepaths.

The complex ecosystem of USB standards isnt getting any simpler, but Intel are doing their best by integrating a USB controller that supports the latest USB Gen2x2 standard. Prior to this platform update support was patchy and frequently required an add-in card or relied on dubious motherboard implementations; Intel grabbing the bull by the horns should hopefully widen the number of peripherals that support this SuperSpeed standard.