It seems like forever since we were all salivating over the x58 chipset three years ago and while we have seen the release of the latest generation of processors in the form of Sandybridge, today we have the latest incarnation, Sandybridge-E. Three years is a long time for any product family in computer terms but the raw power of the Tylersberg chipset and compatible i7 CPU's coupled with AMD's diminishing appeal has meant Intel have kept a very tight grip on the enthusiast market. The Sandybridge chips released in January took the world by storm with 5GHz overclocks achieveable from the best silicon. The disappointing results from Bulldozer has meant people have held off, waiting for the next big thing from Intel and finally it's here. The waiting is over.

We have a special treat in store for you today as we take a look at the current flagship product, the Intel Core i7-3960X Extreme Edition. The new LGA 2011 socket compatible processors have an introductory range of three new CPU's: 3820, 3930K and the range topping 3960X. The Extreme Edition chips have traditionally held a premium over their stable mates so it should come as no surprise that the 3960X weighs in at considerable expense, with an expected premium of £900. That will be enough to put a very large dent in anyones bank account so with such a high price, what can you expect to get for your hard earned? 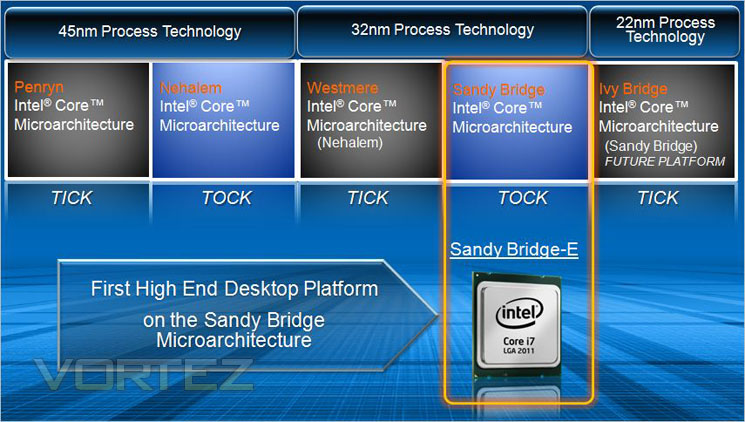 Well for starters you get 6 physical cores (emulating 12 cores with hyperthreading technology enabled). A clockspeed of 3.3GHz rising to 3.9GHz (Turbo technology) comes as stock and this is coupled with a mammoth 15MB of L3 cache. Not only that but quad channel DDR3 is also supported with the x79 motherboards upon initial release bragging upto 128GB support - crazy! If that wasn't enough power then unlocked multipliers on both the 3930K and 3960X are sure to appeal to the overclocking community who crave speed above all else. Speaking of overclocking, the Sandybridge-E processors will require a little more time investment to overclock as Intel have answered the calls to allow Base Clock overclocking, a missing feature that was frowned upon with Sandybridge processors being overclocked simply by raising multipliers. We will get to the overclocking section later in the review but rest assured, Intel have put the fun back into overclocking. A little more complex it may be but overclocking is not just about the final result, it's also about the enjoyement it takes to get there and with more options to drain every last drop of performance from a CPU with Sandybridge-E, the whole process becomes much more rewarding.

Before we put the Core i7-9360X to the test, let's take a look at the specifications and features of Intel's latest and greatest..

There are currently 614 user(s) online:
Google