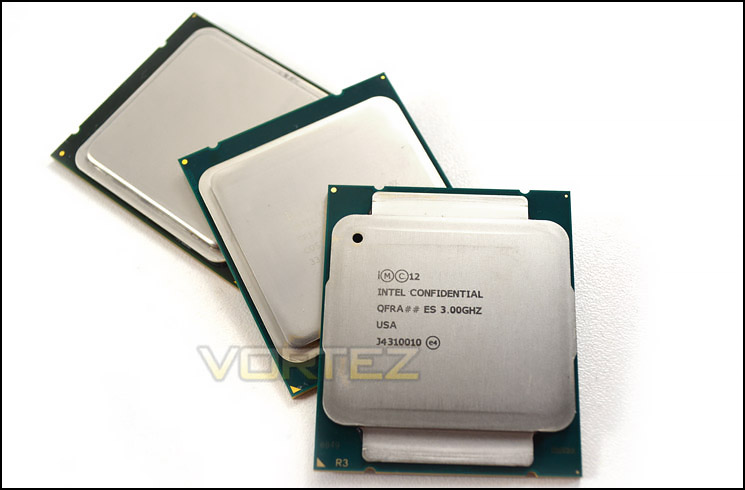 Covered by the heatspreader you'd have to say that superficially the Core i7-5960X is nigh on indistinguishable from its Ivy Bridge counterpart, and that's not surprising. The footprint of both is near identical, cooler compatibility is identical down to much the same stock cooler being used for both, and the sockets differ only slightly. In fact Intel are once again urging overclockers and enthusiast users towards their TS13X liquid cooling solution, speaking to how similar they are in TDP and physical dimensions. It's only below that you get to see a more stark contrast.

Sandy Bridge E is on the left, Ivy Bridge E is central and Haswell-E is rightmost. As you can see there is very little difference between Ivy and Sandy pad layout, although the component layout differs greatly. Haswell-E however has many more exposed contact points in addition to different notch key locations, indicating a much greater architectural complexity and reinforcing that these CPUs are not compatible with X79.

At this stage little is known of the Thermal Interface Material bonding the CPU die to the heatspreader. Much was made (and justifiably so) of the TIM improvements for Devils Canyon recently, and it's likely that Intel have retained a high quality TIM for these new power HED CPUs. 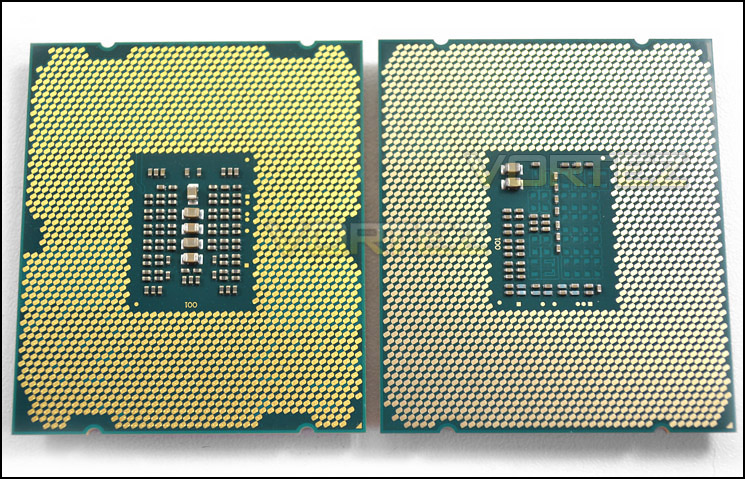 This is a tighter side-by-side comparison of Haswell-E and Ivy Bridge-E. Again you can see the number of exposed pads for the LGA2011v3 socket outnumbers those for LGA2011. Some manufacturers are claiming to have their own socket variants which leverages signalling from these additional locations to unlock greater and more subtle control over the CPU settings. For example the ASUS OC Socket solution can control each CPU voltage rail individually and better manage voltage droop, in addition to being able to individually disable each core. We'll be taking a closer look at partner innovations in each of our motherboard reviews.

Fitting the CPU is as complex as other LGA2011 CPUs - four notches are a little trickier to deal with than two, and the two retention bars require a little more coordination than usual. If you've installed a bunch of LGA2011 CPUs in the past it wont pose any difficulty, whereas those used to mainstream CPUs will take more care than usual.