👤by Tim Harmer  Comments 📅29-08-14
Temperatures and Overclocking
Extreme Edition overclocking changed significantly between Sandy Bridge-E and Ivy Bridge-E, unlocking both BCLK and CPU strap changes. Haswell E changes very slightly again, melding some of the techniques of Ivy Bridge-E and Haswell thanks to a fully integrated voltage controller (FIVR) which splits the input into the required rails. Motherboard partners are implementing broader overclocking features and these look set to be key differentiators in the battle for X99 market share, and we'll take a closer look at each during detailed motherboard reviews. For now we're concerned merely with baseline functionality.

Our test system is being cooled by the high quality Corsair Hydro H105, a LCS cooler with 240mm radiator that's approximate to a high end air cooler such as the NH-D15 or entry level water cooling.

The starting point to work from is an idle speed at @ 1200MHz, base clock of 3000MHz and Turbo of 3.5GHz (shown). The downclocking isn't quite as aggressive as Haswell (which will idle at 800MHz), but should still provide a decent level of power saving in the long run. Default voltage was 0.993, memory at 2666MHz (DDR4).

Due to a limited time frame we concentrated on pushing the CPU multiplier rather than significantly adjusting the BCLK and CPU strap. This allowed us to boot the system at a relatively unstable 4.8GHz quite easily, with 4.7GHz @ 1.4V being a stable overclock that we were comfortable benching at. 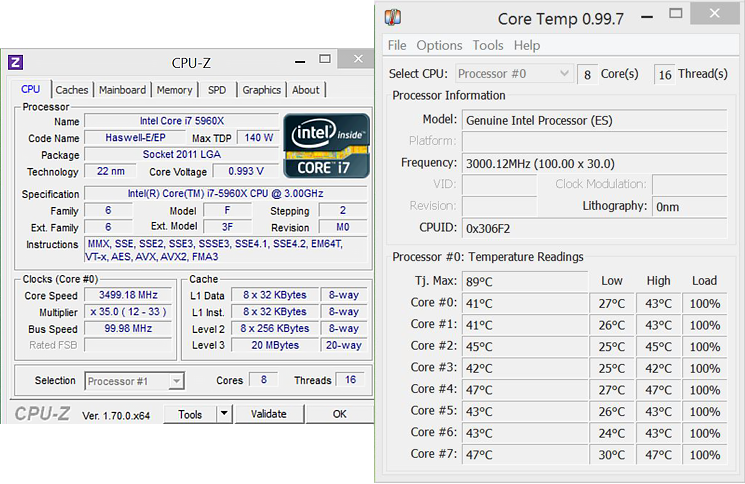 Stock load temperatures reached a core maximum of 47C under long term benchmarking, easily within the acceptable level with adequate cooling. From this we can assume that there's plenty of scope for overclocking purely on a temperature basis.

Temperatures under overclock voltages and speeds reached a toasty 85C, compared to a chill 71C for a similarly heavily overclocked Core i7-4960X. Hitting 5GHz under sub-zero temperatures will certainly be possible, but pushing out engineering sample further under conventional cooling requires much more tweaking (which we will engage during motherboard reviews).