👤by David Mitchelson  Comments 📅25-11-19
Conclusion
Its difficult to ignore the impressive performance the Intel Core i9-10980XE offers when up against other processors which offer higher core/thread counts and clock speeds. Intel has done a good job in optimising the Skylake-X architecture in the form of Cascade Lake-X.

Sadly we were completely missed out on the seeding plan for the Skylake-X refresh, hence the last HEDT CPU to be included in our comparison results is the 7900X.

This Extreme Edition chip under examination today has some impressive specifications when you consider the price-point. On offer are 18-cores, 36-threads for a competitive $979 USD. Intel has obviously reconfigured their pricing structure now that AMD are a fierce contender in the HEDT division.

Since today marks the launch of AMDs Ryzen Threadripper 3rd Gen. weve drawn comparison to the 3960X which is higher in spec yet Intels part does an admirable job in the range of performance tests we ran- sometimes even bettering the monolithic 24-core, 48 thread beast which costs $1399 USD. In some regards the Extreme Edition processor is a better value for money option, especially if youre a prosumer/enthusiast who favours features like Optane. 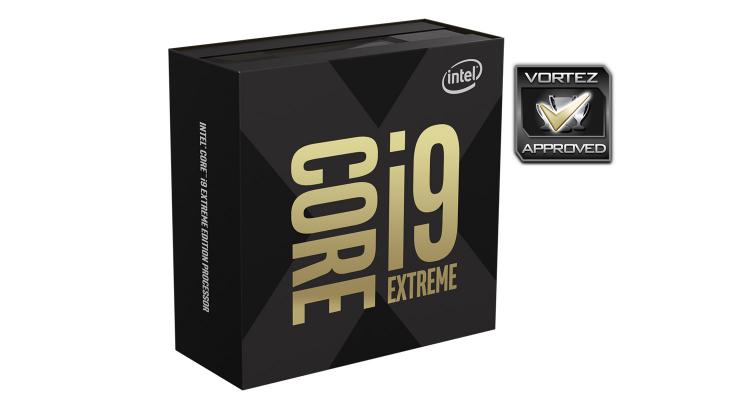 Due to the fact there is no new socket or chipset, motherboard manufacturers have designed refreshed versions of the X299 chipset which introduce a more robust feature-set, in a bid to entice content creators over to the blue team. The ASRock motherboard we used for this launch benefits from such features as WiFi 6, USB 20G and 2.5Gbit LAN  just some of the features which might be useful for those wanting to get the most out of their workflow.

So, Intels offering is a compelling option  especially given the pricepoint. It remains to be seen what their higher core/thread count models will bring to the table when pitted against AMDs new platform but for now AMD are winning the core/thread count battle.

Intels new Core i9-10980XE Extreme Edition has the prowess to crunch through those heavy workloads and does so at an appealing pricepoint.

Cons
- Platform lacks new/innovative features
Click here for an explanation of our awards at Vortez.net.