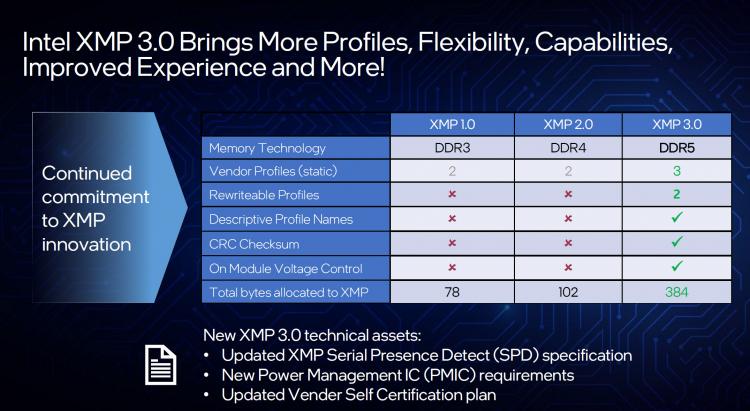 A new feature important for, but not integral to, Intels 12th Gen. launch is dual-channel DDR5 SDRAM support, the new JEDEC memory standard and successor to DDR4. Laid out as a finalised standard in July 2020, DDR5 improves on DDR4 by increasing bandwidth, lowering voltage requirements, allowing dynamic frequency changing, and integrating on-die ECC*. Increased DIMM capacities are also expected to be rolled out for DDR5 which may increase the conventional configurations of gaming and prosumer PCs from 16/32GB to 32/64GB.

Alder Lakes memory controller supports both DDR4 and DDR5, and some motherboards are being shipped with DDR4 rather than DDR5 memory slots. In the short term this may help to promote early adoption of Alder Lake as a platform, particularly if DDR5 turns out to be more expensive than anticipated at launch, but key differences in timing metrics and software sensitivity to those metrics may mean that high performance DDR4 wont be sunset quite yet.

In addition to the improved bandwidth, a key aspect of DDR5 is better allocation of memory resources. Thats thanks to on-board logic thats no longer the sole domain of the CPU memory controller, but may serve to increase the overall cost of DDR5 in the short term.

DDR5 DIMMs being shipped today are operating from DDR5-4800MT/s, the limit of conventional performance on the Alder Lake platform, but JEDEC has so far defined profiles up to DDR5-8400MT/s. DDR5-5200MT/s and higher rated RAM thats being sold today is supported by Alder Lake in OC modes.

DDR5 5200MT/s DIMMs are typically being shipped with a CL subtimings of 38-38-38, but some CL42 DIMMs are also being advertised. Clamping down on DDR5 sub-timings will be an interesting aspect of platform tinkering as Alder Lake matures.

The final aspect wed like to touch on when it comes to DDR5 support specifically is the use of profiles. To complement the onboard processing DDR5 DIMM vendors can now store two writable on-board profiles with performance and voltage settings alongside the DIMMs JEDEC defined defaults. Some vendors will also allow the end-user to edit these profiles, even giving them an identifier string, but Intels use of profiles goes beyond this.

Intel XMP 3.0 and Dynamic Memory Boost together allow supported DDR5 memory to operate according to higher performance profiles depending on requirements, falling back to JEDEC defaults automatically when this performance isnt required to reduce power draw. Its not quite as granular as CPU Turbo automatic overclocking technologies, but its still pretty smart.

* Note that this is not the same as all DDR5 DIMMs having full ECC support. The on-die ECC is primarily to improve reliability with denser RAM chips, whereas on-DIMM ECC includes dedicated communication channels to provide feedback to the CPU.

PCI-Express 5.0 support is perhaps the clearest example of the forward-thinking involved in Intels 12th Gen. platform. Currently no consumer hardware component, not even high-performance GPU and Storage, supports the new standard and we wouldnt expect wide-spread adoption until 2022. That wasnt the case with the introduction of PCIe 4.0 with the Ryzen 3000-series; the technology had almost day-one support from storage manufacturers and their own GPUs, but many in the industry have opined that the standard was adopted late.

PCIe 5.0 doubles the bandwidth per lane to 32 GT/s, or up to 128GB/s aggregated across an x16 link. The speed increase will be mouthwatering for the enterprise market that even now is labouring against the restrictions of PCIe 4.0, but consumer applications are unlikely to realise the benefits in the near term.

Alder Lake offers 16 PCIe 5.0 lanes off the CPU for discrete Graphics and 4 PCIe 4.0 lanes for NVMe storage. Eight further PCIe 4.0 equivalent lanes are used for the upgraded DMI 4.0 interface between CPU and PCH, which is twice as fast as that present on Rocket Lake/500-series motherboards.

For this feature specifically Intel have truly surpassed AMD, but the 12th Gen. will have to wait a little while for the industry at large to catch up. Catch up they will however, particularly as AI and Machine Learning become more prominent in both commercial and consumer sectors. 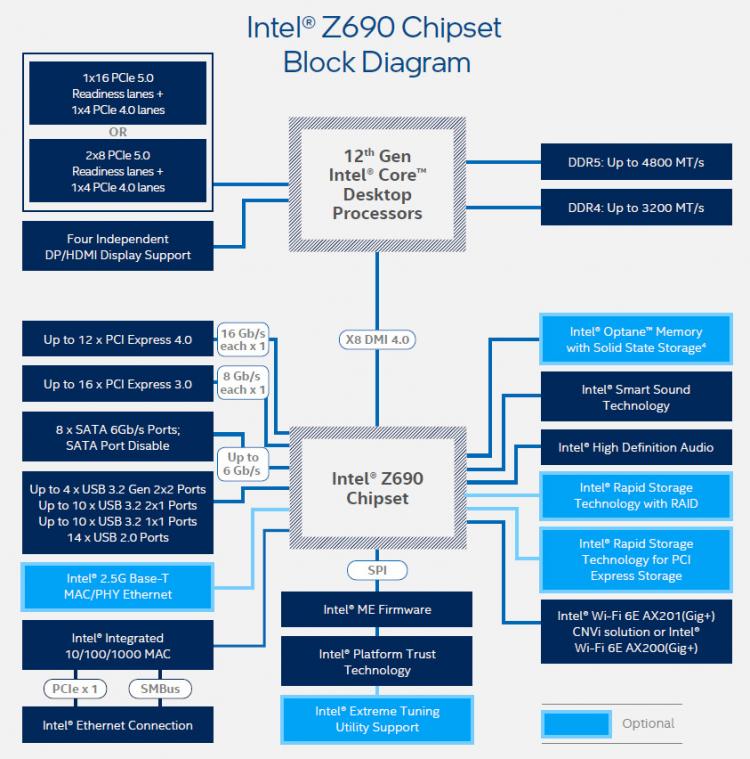 The final piece of the 12th Generation platform puzzle is of course the 600-series chipset. Todays range of K-series 12th Gen. CPUs are launching alongside Z690 motherboards, the most fell-featured designs in the consumer space that also support the overclocking options available to Intel K-Series CPUs. Theyll get some time of their own in the spotlight soon, but for now lets restrict things to their key features.

Z390 motherboards are equipped with LGA1700 sockets and are only compatible with 12th Generation Core CPUs. Coolers too will need new LGA1700 mounting kits, so you may finally have to retire that trusty Hyper-212 that has been with you since the Sandy Bridge era. But that aside, there should be few gremlins laying in wait in terms of the motherboards physical aspects - they still conform to standard ATX sizings and layouts.

The DMI link between CPU and chipset has been upgraded with Alder Lake to 8x DMI 4.0 lanes, doubling the bandwidth available to peripheral devices without needing to add active cooling to the PCH. This also means that the chipset is able to lay on additional PCIe 4.0 lanes for devices that dont require direct connection to the CPU such as tertiary storage, and will be a driving factor in many premium motherboards now being bedecked with M.2 NVMe storage slots.

Z690 motherboards will optionally support the integrated Intel WiFi 6E, a high-performance wireless protocol that leverages the newly available 6GHz wireless spectrum for faster wireless networking and improved network management in congested locations. The technology had been integrated into some 500-series designs but typically through 3rd party components. Improved I/O provision also allows full operation alongside 2.5G Ethernet, another new feature that should be standard across Z690.

Lack of true USB 3.2 Gen2x2 support has been a bugbear for many peripheral manufacturers trying to exploit the new high-speed 20Gbps (bidirectional) connector, but the tech is finally coming to the desktop as standard. It joins Thunderbolt 4 on many motherboards in giving you as many connectivity options as possible.

Finally, its well understood that the different Z690 designs will vary their power delivery according to the different market tiers and associated overclocking expectations. On-board cooling - VRM heatsinks etc. - will similarly vary in size and complexity. One aspect that appears to be exceptionally common however is the use of 8+4 or 8+8 connectors for CPU power, typically located on the top-right of the motherboard.

This, more than any other aspect of the motherboard design, speaks to the anticipated power requirements of the Alder Lake platform in its default configuration (which, we should note, ships with indefinite duration PL2 power states). It also may require a new PSU - Intel havent provided any specific PSU recommendations, but models with at least 8+4 12V connectors arent as common as youd like among designs below 650W. For reference, 8+8 wasnt uncommon on AMDs X570 platform, but 8+4 was typical and even single 8-pin configurations (such as the GIGABYTE X570 GAMING X) were also available.