👤by David Mitchelson  Comments 📅13-08-19
Conclusion
After spending some time with Intels NUC 8 Mainstream G, we can safely say that its a neat piece of kit that will be ideal to use as a home theatre configuration or family system.

The obvious benefit to using such an ultra-compact system like this is the small footprint. Itll tuck away nicely to the side of a desk or even behind a large display if desired. If it is out on display though, Intel has done a great job on the aesthetics, it looks sleek and stylish.

Throughout our testing we benchmarked the NUC against previously tested laptops which are positioned as mid-range mobile systems. For the most part, Intels offering did an admirable job for its given specifications and we can definitely vouch for it being capable for multimedia tasks. The only area in which we see this unit struggle is in the gaming arena. Even with the detail presets cranked down to low, the Radeon 540X with its 2GB GDDR5 will hover around 20-30 fps in most games. However, we have to appreciate that this product isnt designed to be a gaming machine, but our tests do provide an interesting insight should you wish to indulge in some casual gaming. 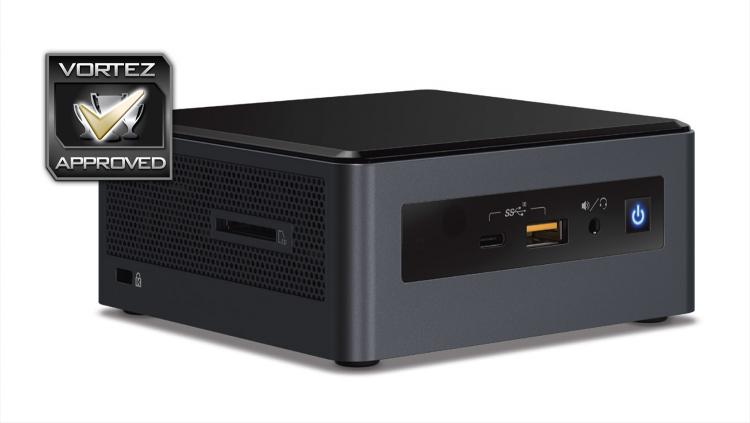 The great benefits of NUC8i5INH are that it outputs low temperatures, low noise and low power consumption. All three of these attributes are something which most users seek to keep to an absolute minimum and Intel has certainly achieved this.

We like that there is an option to expand and build upon the current configuration by adding in additional storage easily. Our configuration lacks the 2.5 secondary drive but there is space to install this at a later stage should the user desire to do so. Storage within our NUC relies solely on the 256GB Intel SSD 545S. This drive is highly capable at delivering good results under the SATA interface but since Intel have a PCI Express Gen3 X4 slot  it would have been much more advantageous to use a PCIe SSD instead.

Intels NUC 8 Mainstream G is priced from $750-1100 USD. So our model at $811 @ Newegg is one of the cheaper models in the stack. Buying the components individually with Windows 10 Home Edition would total around $600. For an extra $200 the system is prebuilt for peace of mind and arrives with a 3 years warranty which isnt too shabby at all.

NUC 8 Mainstream G is an ultra-compact computer system which combines a handful of components including an Intels 8th Gen. Processor and Radeon 540X discreet graphics that is able to deliver competent performance for home-entertainment.