Whereas Skylake-Xs predecessor Broadwell-E was an optimisation of Haswell-E (resulting in little clock-for-clock performance improvement), the new architecture is as substantial a revision as Skylake was over Broadwell. Under the old Tick-Tock Intel development paradigm it would be classed as a Tock (i.e a major architectural evolution), but Intel havent revealed whether their HEDT CPUs are also moving over to the Process, Architecture, Optimisation cycle now utilised for mainstream Intel CPU designs.

The Core i7-7800X is part of a family of CPUs which will range from 6 cores all the way to 18 on the i9-7980XE, but for now doesnt gain the exalted new i9 performance branding; that privilege remains reserved for 10-core and higher SKUs. Despite sharing the Core i7 identified with the previously reviewed Kaby Lake-X i7-7740K which also sits under the Core-X HEDT CPU banner, the i7-7800X brings with it architectural improvements over mainstream Skylake and (arguably) Kaby Lake/Kaby Lake-X designs.

Its out with the old and in with the new as Core X and X299 introduce Socket LGA2066. This new standard is similar in size to LGA 2011 and LGA 2011v3, but not at all compatible in pin-out. As a result Core X CPUs are not backwards compatible to X99, nor are Broadwell-E CPUs supported on the X299 chipset. 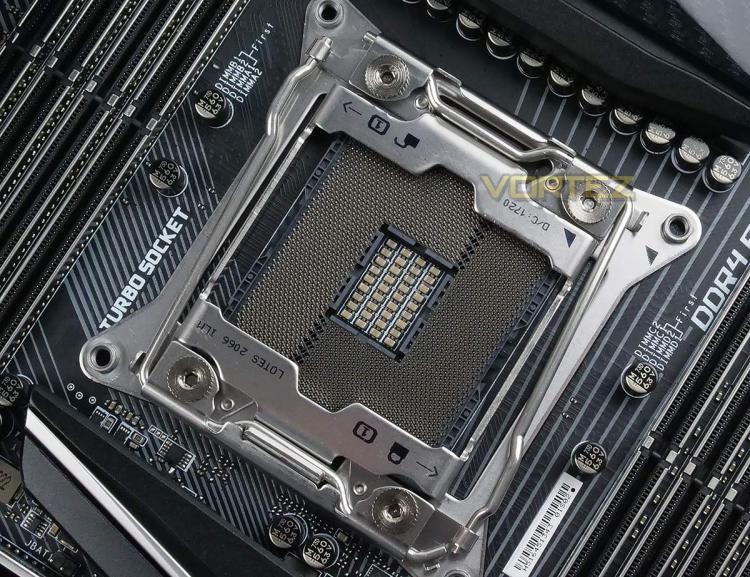 CPU coolers compatible with LGA2011v3 are also compatible with LGA2066 CPUs. If you are upgrading to a new X299 system, and already make use of premium air or water-cooling solutions that supported LGA2011, you should have no issues with the transition (assuming theyre rated for the appropriate TDP). As usual it will be best to double-check with manufacturer, but reusing your old HEDT CPU cooler should be the least of any difficulties you have.

The Core i7-7800X supports DDR4 memory in quad-channel configuration up to DDR4-2400 at stock. The on-board memory controller allows overclocking beyond this point and supports Intel XMP memory profiles, and kits rated at DDR4-3200MHz and beyond are available. Workloads which take advantage of the increased memory bandwidth possible with such configurations are not common in mainstream application environments, but enthusiast and prosumer demand does exist. Tasks such as video rendering in particular will be able to leverage bandwidth and increased capacities.

Intels HEDT platform treats both core count and number of supported PCI-Express lanes as key differentiators in the product lineup. At the top 44 PCI-Express 3.0 lanes are available from the Core i9-7900X, a fact that is true for all the Core i9 CPUs, whereas the i7-7640X and 7740X only support 16 (the same as the mainstream platform). The i7-7800X and its sister-chip the 8-core i7-7820X sit in a middle-ground, supplying 28 lanes from the CPU. In this respect there is little progression from the previous generation, where the Core i7-6800X offered the same number of lanes at this position in the product stack.

In fairness, the benefit of a higher number of dedicated PCI-Express lanes has been in dispute for some time. In theory it should be a particular boon for multi-GPU setups, but many publications have come to the conclusion that each the performance impact of limiting dual-GPU systems with PCI-Express storage to 16 PCIe 3.0 lanes is minimal. Realistically, 28 or more lanes are probably only necessary in systems with three or more GPUs saturating the PCI-Express bus alongside high-speed storage, and that is even more unlikely today as both NVIDIA and AMD move away from three- and four-way SLI/Crossfire support.

Nonetheless, transitioning from 16 to 28 PCI-express lanes from the CPU is a marked theoretical improvement, and may offer a level of future-proofing if subsequent GPU generations begin to tax the PCI-Express bus more.

In common with all recent Intel X-class HEDT CPUs, the Core i7 7800X supports BCLK, memory and CPU multiplier overclocking. Discrete voltage control for multiple lines are also exposed via the motherboard BIOS, allowing a high level of control on motherboards tailored towards overclocking.

Whilst PCI-Express lanes and core counts are key differentiators for Intel, overclocking support is fairly central for motherboard manufacturers. Higher grade motherboards may expose more tweaking controls to overclockers and be equipped with more robust power delivery infrastructure, but modest overclocking capabilities are generally supported across the X299 range.

Cutting edge overclocking enthusiasts will be disappointed to hear that Core X CPUs are unlikely to use anything other than high-quality thermal paste as the interface material between CPU die and integrated heatspreader. Famously the top-end Haswell-E i7-5960X made use of a indium-tin solder bonding between CPU die and heatspreader for better thermal performance, but Intel has in general been reticent in using this solution. De-lidding the CPU is an option and kits are available to do just that, but its decision no one should take without understanding the risks involved.

Consumer-class Optane Memory products were introduced in January by Intel as a platform exclusive for the then-new Kaby Lake CPU and Z270 platform. These devices, outwardly similar to familiar M.2 PCIe SSDs such as the Samsung 950 Pro, integrate 3DXPoint non-volatile memory rather than conventional NAND for environments which can leverage particularly high IOPS and Read bandwidth performance.

Optane Memory SSDs are currently limited to relatively small capacities  chiefly 16GB and 32GB models. Whilst not suitable for OS or storage drives due to their capacity, they are ideal as intermediary caching drives well suited to systems which rely on mechanical HDDs.

The SSD and storage landscape is changing fast. M.2 storage in particular is a burgeoning field currently dominated by Samsungs 960 EVO SSD lineup, but many manufacturers are transitioning from MLC to TLC NAND in SATAIII SSDs to compete on capacity rather than speed. More affordable caching drives such as Intel Optane Memory, paired with slow mechanical HDDs, return as an alternative which will bridge the price/performance gap to M.2 in drive capacities which SSDs as yet cannot match.