👤by Matthew Hodgson  Comments 📅20-02-18
Performance Testing
Having now used the Logitech PowerPlay for roughly three weeks, and with the Logitech G603, G703 and G903, we feel confident in saying that, even as a basic mousemat, it performs exactly as advertised. Our fear was that some compromise might be made to the fundamental operation to incorporate the wireless charging. The option of a cloth or hard plastic surface is pretty much essential, in our eyes, allowing the user to try both and choose which they prefer. Both surfaces feature an incredibly sticky blue rubber coating on the underside; we attempted to move this with absolutely no joy, whatsoever. It will never budge under normal, real world conditions, were convinced of that.

To use the PowerPlay mousemat, you must first replace the optional 10g weight, located on the underside of the mouse, with a small puck like piece, which converts the electromagnetic energy into electrical power for the battery. Once thats replaced, youre all set to go. No settings on the mouse need to be adjusted.

The RGB lighting is another area we particularly liked. The G can be configured to a single colour, or synced to cycle through colours with the G703 or G903. The LED is bright and vivid with a clearly drawn outline. One odd choice by Logitech, however, is the inability of actually turning the RGB lighting off, we dont feel this should be forced upon you; some users prefer a desk space entirely free of any kind of distraction. 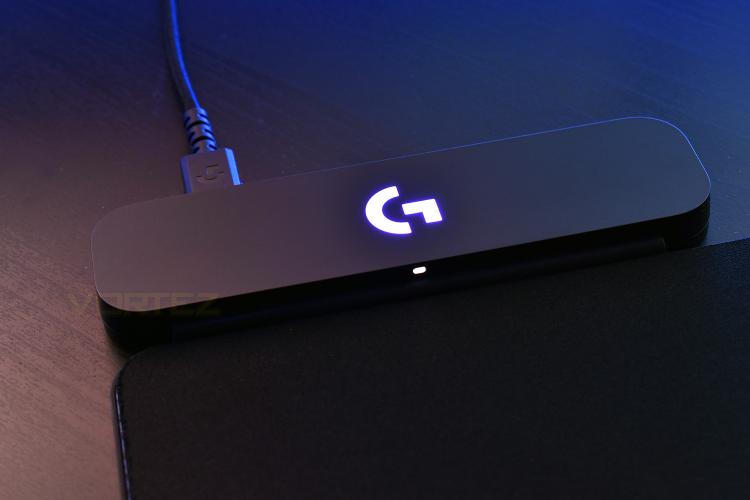 Built into the hub, at the top left, is the LIGHTSPEED wireless connectivity. This makes the nano receiver with the G703 and G903 completely redundant. Not only does this then pass the wireless charging power but also all of the LIGHTSPEED data through the same USB port, saving vital USB connections on your PC, while also decreasing the distance between the mouse and the receiver.

After a small amount of time, you become completely unaware that your mouse is even wireless. The convenience of not needing to remember to charge the device or even think about battery life is more than worth it for us. Gone are the days of it cutting out mid-game and frantically searching for the cable underneath piles of crisp packets or stacks of paperwork. That being said, if you planned to use the device to charge your mouse, you would be waiting a long time. Using the cable, the G703 and G903 both charged within a couple of hours, from empty, whereas with the PowerPlay pad, we waited around 12 hours. Also note, the PowerPlay mousemat will never charge the device all the way to 100%, in order to prevent premature battery degradation and to optimise battery cycles.