👤by Matthew Hodgson  Comments 📅22-08-18
Conclusion
The MSI B450 Gaming Pro Carbon AC, almost without doubt, offers incredible gaming and computational performance without breaking the bank, which is even more apparent when you compare the numbers with the X470 flagship model which fares better in most tests but gets shown the door when it comes to gaming results, including VR, with the MSI B450 topping every single gaming-related graph.

The layout is pretty good too; theres ample fan connections, a pair of M.2 ports, both of which support AMDs StoreMi technology for improving the speed of hard disk drives by using an SSD as a cache device. The heatsinks arent too big or cumbersome but they perform their tasks well and allow a very reasonable overclock to our 2700X CPU. Theres the pair of PCI-E 16x slots, alongside with three x1 which should be plenty for any reasonable consumer PC. Dont forget the full six SATA ports, which are often cut back to only four on lower end chipset boards, leaving scope for large storage arrays; theyre even equipped with RAID support, if data security is your bag.

The colour scheme, which weve mentioned a few times, isnt really a colour scheme at all, but it lends itself well to the RGB craze. We like the grey lines design on the PCB, which while being very noticeable, isnt too in-your-face. MSI have found a good balance here.

The rear IO, for a motherboard with a £120 price tag, is lacking a little too much for our liking. Wed expect a minimum of 8 USB ports, which the ASRock B450M Pro4 managed. Were not ignoring the fact that Display Port and 7.1 audio is included, but USB ports are becoming more and more precious to PC users, especially if their case of choice doesnt house many on the front panel. The Intel WiFi is welcomed, due to the possibilities it opens up for the end user. Many people arent lucky enough to be able to wire into their router and must therefore rely on the wireless capabilities of their PC. The Intel WiFi chip allows both 2.4GHz and 5.0GHz wireless transmissions, as well as Bluetooth 5.0.

Speaking of the 7.1 audio; MSIs AudioBoost4 is well regarded amongst tech enthusiasts, with its warm sound and great performance. If you plan to use this as a gaming machine, youll be served well by this. 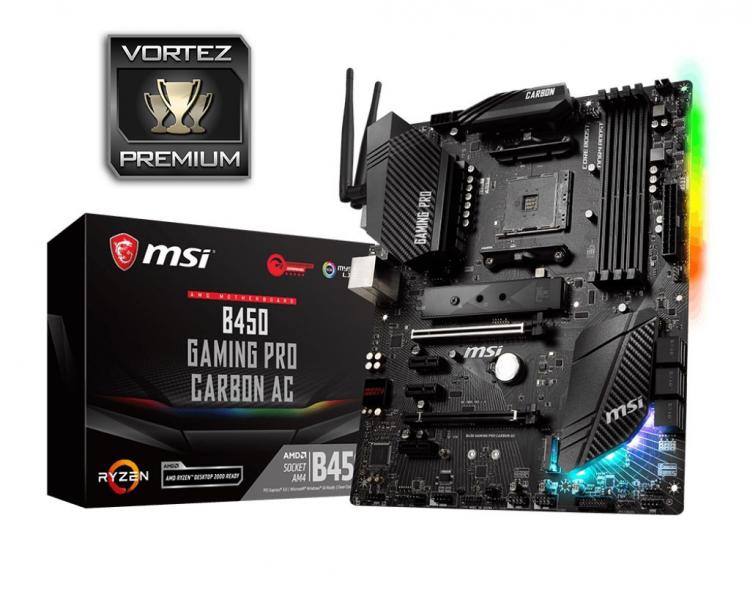 Considering the results in our gaming tests, which were repeated several times, we cant help but recommend this motherboard as a solid base for your new battlestation. The AM4 forwards and backwards compatibility should also provide some added incentive for a potential buyer

Pros
+ The best gaming performance weve seen on an AM4 board
+ Keeps up in the rest of the tests
+ Lovely monochrome design with Carbon Fibre accents
+ Large heatsinks perform a genuine function
+ Twin M.2 ports (With StoreMi)
+ Abundance of fan and RGB ports
+ RGB lighting
+ 8+4 CPU power delivery
+ AudioBoost4

Cons
- Too few USB ports on the rear IO