👤by David Mitchelson  Comments 📅20-07-11
Conclusion
There has been plenty of talk surrounding MSIs Big Bang Marshal over the months and at the trade shows its featured at  and rightly so, this colossal motherboard delivers a multitude of useful features and can support Quad-CrossFireX. As we have shown in the overclocking stages, Marshal easily attained 5GHz  unlike many of the other motherboards we have tested that couldnt quite make it.

Its strengths come with the array of features. 24-Phase DrMOS power enables the power and efficiency needed to take the CPU to new heights. Thats not all either, being a Military Class II motherboard Marshals componentry around the CPU socket (and indeed throughout the motherboard) features Super Ferrite Chokes, Hi-c CAPs and Solid CAPs for better stability and extended durability. MSIs campaign to provide higher-quality motherboards is working extremely well, other manufacturers seem to be continuing to use older methods whilst MSI invest and research in better, more reliable ways to give general, power and extreme users the kind of products they deserve. Have a read about Military Class II in our article from CeBIT.

Stock performance was strong and although it did indicate similar performance figures compared to other motherboards tested such as the ASUS P8P67 and Maximus IV Extreme  overclocking portrayed a key advantage. Those who would be investing in such a motherboard would surely have overclocking in mind since this board is geared towards this with all the military grade components and 24-Phase power! 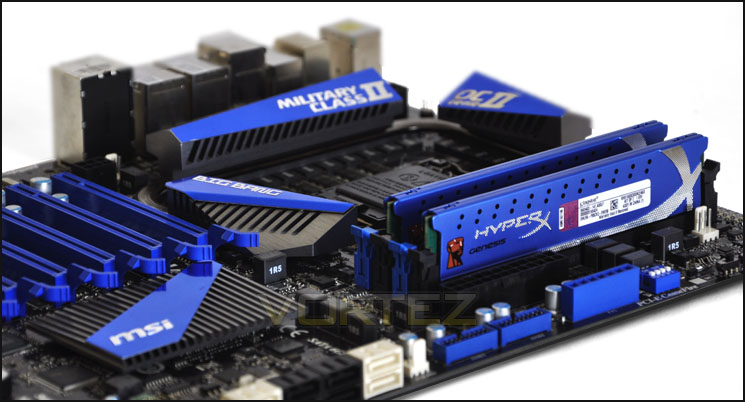 If manual overclocking scares you to death there is always the option of MSIs OC Genie. With a quick press whilst the computer is down, you can power up to a pleasant overclock beyond 4GHz. For the amateur overclocker, this feature will pave the way and perhaps encourage to getting to grips with tweaking the settings manually  especially after they see the rewards for doing so. Ideally though, because Marshal costs such a premium users really ought to be taking advantage of all of its overclocking support.

Now on to the topic of cost. MSI have really gone all out with the Big Bang Marshal and its no surprise that doing so means the cost for the end user is going to be higher than a good chunk of other high-end motherboards on the market. Just putting this into perspective  Military Class II components throughout, 24-Phase DrMOS design, 12 x USB3.0 ports (2 x USB3.0 headers) with 3 NEC chips, 2 x Realtek NIC IC, Lucid Hydra chip, 8 x PCI-E, Voltage-Check Points, CeaseFire, Click BIOS and more If you still cant understand why Big Bang Marshal is so expensive then you probably need more sleep. All of these features and components translate to approximately £260 inc. VAT. Its difficult to justify spending so much on a motherboard but readers can surely appreciate the calibre of this motherboard and understand that there is nothing quite like it around and you are investing in something very special.

Bottom line is: Big Bang Marshal is the ultimate motherboard offering that will keep power and extreme users entertained for a long, long time. It does come at a high cost but bearing in mind the componentry involved you can appreciate that this board is feature laden and very special.

There are currently 608 user(s) online:
Google