MSI have long been a leader of producing some of the finest PC components so when I was told I would be getting my hands on the 'Xtreme Edition' of the very popular GTX580 Lightning, to say I was excited was an understatement! The original Lightning was a pre-overclocked, custom cooled version of the NVidia GTX580, itself an excellent card and widely regarded as one of the top graphics cards available today. So how do you improve on that, what more could be done? Well, as you will see in this review I have tried to cover all bases so please make yourself comfortable as it will certainly not be a brief overview: there are just too many features, so many little touches that make this such a special piece of hardware. It would be therefore be criminal not to give it the full on, in-depth Vortez treatment. So grab a cuppa, dim the lights and sit back as I talk you through what could well be the graphics card of the year 2011.

The NVidia GTX580 is everything the GTX480 should have been. Many were left with a bitter taste in their mouths after sampling the GTX480 in that while it was powerful, it was a very power hungry beast, ran very hot and that heat could only be tamed by a cooler that was far too noisy to be applauded. While the GF100 was undoubtedly one very powerful processor, the revised version, the GF110 was built using an improved 40nm process that reduced temperatures, power consumption yet increased performance. With ATI biting at NVidia's heels with the Caymen core it was all the more important they got the recipe right this time around otherwise they could have been left floundering while ATI basked in the adulation of a very discerning enthusiast crowd. 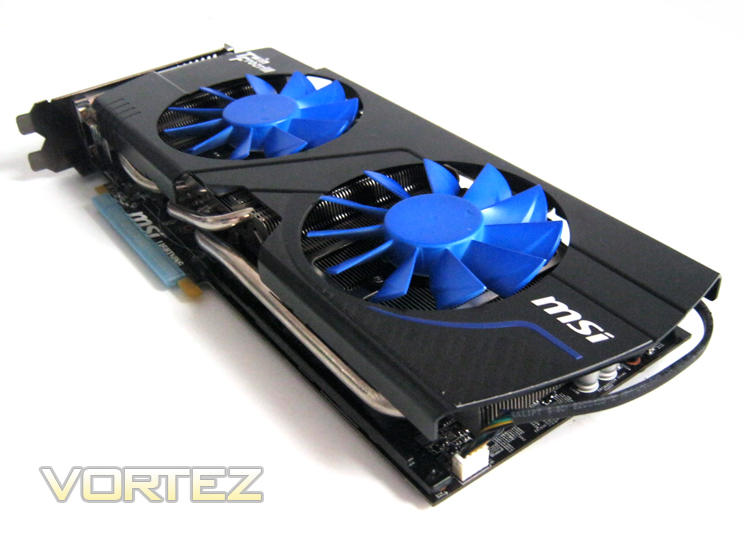 Fortunately for the green team, they did get it right and while the GTX580 still commands the inflated prices most NVIdia cards inherit, it has proven a very popular item. Crowned the GPU king by many, it came as no surprise that manufacturers clambered to release tweaked versions, each offering their own overclocked editions complete with a variety of customised coolers to keep the increased heat under control. MSI were one such manufacturer and their Lightning edition, coupled with the exceptional Twin Frozr cooler proved to be a great success. MSI have not sat on their laurels though. Never ones to sit still, MSI continue to innovate and like their company slogan 'Innovation with Style', they have not only improved the performance of the GTX580 yet again, but they have enhanced the visual appeal of the card.

There are cards on the market today that have 4GB of GDDR5 on-board. Those are however dual GPU cards. The standard GTX580 has to settle with a 'paltry' 1.5GB. MSI have took note that the enthusiast market are now gaming at resolutions higher the 1680x1050. 1920x1080 is now the norm with 1920x1200 becoming increasingly popular. There are those who crave higher resolutions and with multiple monitor setups now being fully supported by many recent games, higher and higher amounts of Vram are required to keep pace. It's for this reason that MSI have seen fit to employ 3GB of GDDR5 to the Xtreme Edition of their GTX580. Overclocks remain untouched but the cooler has been re-designed in the guise of Twin Frozr III.

A bit about MSI

Quality Products Lead to Faithful Customers is a motto that guides all that we do at MSI. Everyone at MSI goes all out to be the best of the best in research and development. Currently, 2,000 experienced engineers staff our research and development department. This talented team carries out its work with the latest research equipment, continuing to raise the bar on product quality and innovative product features.

MSIs brand leadership is well established in the mind of the customers. It is this driving force that propels MSI to constantly move forward.

The card on review today has a multitude of features, some similar to the original GTX580 lightning and some new features but the jewel in the GTX680 Lightning Xtreme editions crown is its overclocking prowess which we will cover in-depth later in the review. For now, let's see if the specifications have changed...