👤by David Mitchelson  Comments 📅30-10-18
Conclusion
Initial reaction to NVIDIAs RTX 20-series has been met with some criticism and this is understandably so. At the end users side, while there are next-gen features present they are mostly unusable at this stage and prices compared to last seasons GTX 10-Series have soared astronomically.

However, with no clear rival in the high-performance graphics card sector, NVIDIA could have provided a refresh with just incremental performance benefits (much like Intel had done prior to AMD Ryzen) but they didnt. Instead, they chose to revolutionize with true next-gen features like Ray Tracing and DLSS. Argument could be made that were not quite ready for both of these features - compatible games have been announced, but most are quite a way off. That argument is justified in one regard but in another, game developers need the hardware and technology in order to incorporate this into their games  without RTX hardware and Ray Tracing capabilities games would remain as they currently are, rasterized.

So, NVIDIA are to be commended for moving the market forwards. The benefits may not be so immediately clear but they will be soon. We recently met with NVIDIA for a private session to demo Ray Tracing first-hand in the upcoming Metro Exodus and the results were spectacular.

With that said, what is MSIs rendition of the RTX 2080 Ti like? Well, the GAMING X TRIO is an outstanding card in almost every aspect. It looks fantastic, operates at low temperatures, low noise, has all the RGB features and overclocks beyond the factory overclock, reasonably well.

In all of the games we tested the GAMING X TRIO came out neck-and-neck with the other RTX 2080 Ti graphics cards and thats because the other solutions on the market also feature a similar factory overclock to this MSI variant. 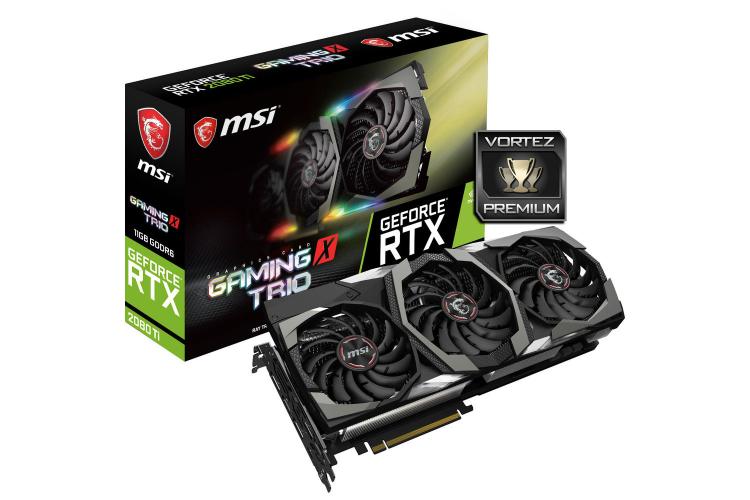 The strength of the digital phase design can be felt by way of the overclocking result. Beyond the factory overclock we were able to nudge up the frequencies of the GPU and memory clock - allowing us to tap into an extra 10fps in-game. Even after a significant overclock (with intensity placed on the components) the overall temperatures remained in the realm of sensible thanks to the Tri-Frozr design, which is well-thought out and very capable.

As weve already pointed out, the RTX 2080 Ti isnt going to win any value for money awards and this GAMING X TRIO comes in at a cost of UK £1199 US $1200 AUS $2099. Were on NVIDIAs side so far as commending them for the new tech, but we still feel the overall cost is too high. Against other 2080 Ti graphics cards the GAMING X TRIO is of the cheaper options out there, which is good to see.

MSIs RTX 2080 Ti GAMING X TRIO delights in all aspects  this high-performance graphics card will give you blistering performance while keeping cool and quiet and there is even more headroom to squeeze out extra performance with a manual overclock!

Cons
- Large
- Heavy
- Expensive
Click here for an explanation of our awards at Vortez.net.