👤by Matthew Hodgson  Comments 📅19-10-18
Conclusion
Theres no denying how strong MSIs current portfolio is amongst the gaming PC community, offering strong motherboards, GPUs, laptops and monitors, and of course, desktops. That broad range of expertise seems to have paid off when constructing their latest PC.

Obviously, if youre shelling out £2900 on something not much bigger than an Xbox One, you want some serious grunt to back that up, which the Trident X delivers in spades.

Firstly, looking at CPU performance, Cinebench, Handbrake and PC Mark 8 & 10 all threw out some truly impressive scores, making this machine more-than-suitable as a workstation device.

But then if we switch to gaming performance, this is where the machine truly shines, due to the high clock speeds that the Core i7 9700K is capable of, as well as the excellent performance offered by NVIDIAs RTX 2080. Our tests in Total War: Warhammer, Rise of the Tomb Raider, Deus Ex: Mankind Divided, DOOM and DiRT 4 all showed the true performance of this machine, managing over 60FPS in all but Deus Ex at 4k resolution. At 1440p, we saw Deus Ex manage 60FPS average for the first time in a pre-built machine.

Despite the tiny stature of the machine, along with the power-hungry components fighting for space and cool air, the Trident X keeps itself remarkably cool, and quiet too. Much quieter than some PCs considerably larger than this. Our GPU topped out at 68°C and the CPU found itself at 74°C during our temperature tests.

While the performance is great, the chassis also looks amazing. We loved the inclusion of several RGB zones as well as the choice of metal or tempered glass side panel, giving the machine a real gamer feel. Something wed like to see improved is cable management; the product renders we received before we got the product showed a much cleaner and less obstructed interior, whereas the reality is a good ¼ of the machine being a mess of cables. A blanking plate or tunnel to hide the cables in would be welcomed.

Thanks to the 512GB Samsung PM981 NVMe SSD, the system reacts quickly and boots up in less time than it takes to organise yourself at your desk. Theres also the 2TB hard disk drive providing plenty of storage space.

Finally, the important bit. Price. The MSI Trident X will arrive in stores soon and will set you back £2,899 in the UK. We dont have pricing for other markets yet. Thats a not-inconsiderable amount of cash, especially when having a quick dance around the internet turns up desktops from system integrators that we know and trust, for much less money, with similar components. Though, let it be said, they dont arrive in a custom chassis like the MSI and will take up much more room on your desk. 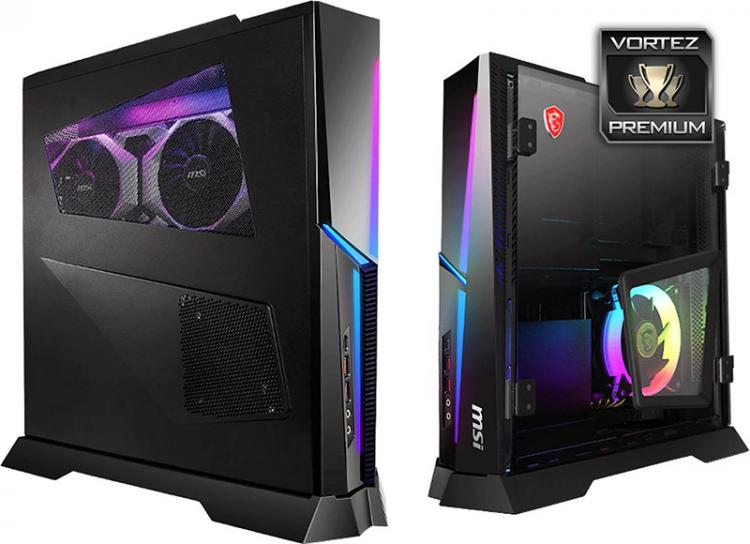 The Trident X provides impressive performance in a small form-factor, though it is costly.